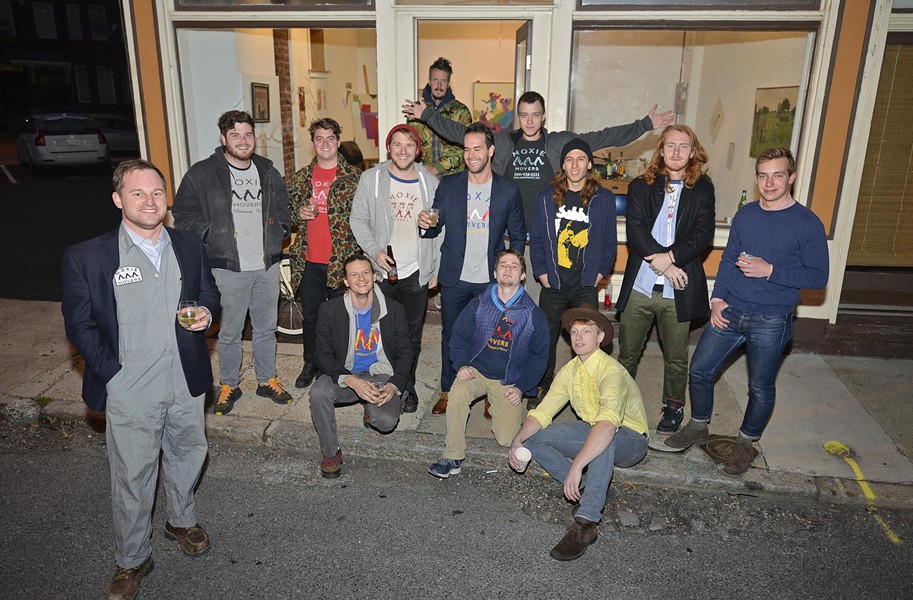 Ash Daniel Jesse Whitacre, at left, celebrates with his artistically minded moving crew after a hard day of work at their gallery on Brook Road.

The ad was a regular post on Richmond Craigslist: "Moving company seeks Capricorn or Taurus for immediate work."

It seemed like a joke, but for Moxie Movers owner Jesse Whitacre, the ad at least was semi-serious. For three years, Whitacre has run his Scott's Addition-based company exactly as he wants, and he doesn't mind indulging a few eccentricities.

"If somebody who had an M.B.A. looked at Moxie Movers, they'd be shocked," Whitacre says. "I don't hire movers. I don't hire people with experience."

Drawing from 19 years in the moving business, Whitacre says it was more important to hire people who got along rather than those who had moving credentials. Working for other companies, he says, he saw his fair share of shouting matches and fistfights.

"I wanted to hire people I could work with, people I could enjoy spending the day with," he says. "Friends. That's the secret. Everyone who works here likes each other."

With the same enthusiasm for camaraderie, Whitacre opened Fuso Gallery in September to display works from his nine employees, all of whom are artists.

"It was something that everybody always joked about," Whitaker says of the space on the First Fridays Art Walk. "I think Moxie Movers is the only moving company in the world that also has an art gallery."

For months they contemplated staging a pop-up show in the back of a Mitsubishi Fuso work truck. Instead, Whitacre took the name of the truck and gave it to the gallery.

"In true Japanese fashion, they named a work truck after a flower," Whitacre says of the Mitsubishi Fuso. "It means hibiscus, or flowering tree of the east."

The gallery's first exhibit was themed around trash and recycling, many of the installations reusing cardboard, bubble wrap and other found materials. The premise is pulled straight from their moving work.

"We encounter junk on a daily basis," Whitacre says, relating a horror story of a pack-rat client. In the moving profession, workers often must work around piles of trash.

"It's a really wild job," says Rob Lee, who's been with the company for two and a half years. "You get to see people in their most intimate places. Some poll out there said [moving is] one of the most stressful things, and seeing how people react has been pretty eye-opening."

A graduate of Virginia Commonwealth University's art school, Lee has exhibited black-and-white ink brush works at the gallery, which he describes as a satiric "cross between Daniel Clowes and '40s-esque sci-fi" illustrations.

Like other employees, Brandon Roundtree had no moving experience when he was hired, but did meet one of Whitacre's other qualifications.

"In his ad he said, 'Don't bother responding to this ad if you haven't read 'Candide' by Voltaire,'" says Roundtree, who was also the singer for defunct alternative rock band Conditions. He exhibited a drawing at the gallery's first showing. "I knew this wasn't going to be the normal kind of moving job."

The gallery has another function for Whitacre — to get him painting again. Before owning his company and joining the Army, Whitacre studied art in college and lived out of a garage as a starving artist. Owning a business and being a family man have meant that he doesn't get to paint as often as he'd like.

"You don't make anything for six months," he says, "then all of a sudden it's three years, and you're like 'I'll never paint again.'"

The plan is to change installations every month, and the gallery will feature work by the first non-Moxie artist in December.

While Whitacre also has plans for Fuso's future, for now he's happy with how things are. "If I can have an art gallery and spend time with all these guys," he says, "that's heaven to me." S