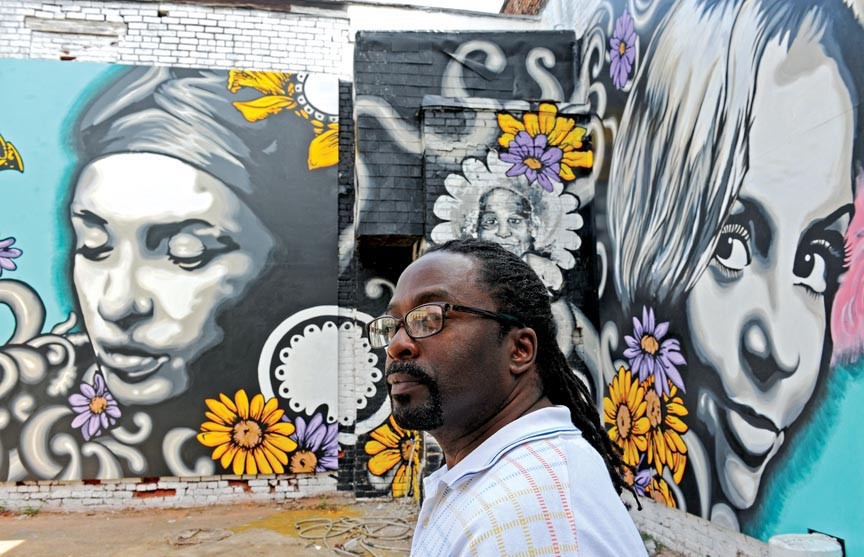 Are they bright additions to formerly dingy corners? Or rips in the historic fabric of Broad Street?

It all depends on whom you ask.

During the last few weeks, a team of artists and volunteers has completed four murals in the newly christened arts district on Broad. Some big names are behind the project: Altria, Venture Richmond, HandsOn Greater Richmond, Johnson Inc. and one of the city's best-known artists, Ed Trask.

But three of the murals are on a short section of Broad that's an official old and historic district. Here, any visible changes to building exteriors must be approved by the city's guardians of old buildings, the Commission of Architectural Review.

The project's organizers didn't ask permission before getting out the brushes. At the commission's May meeting, one member emitted a sound of shocked disbelief when told the muralists had painted over previously unpainted brick.

The murals already are complete. But the organizers aren't off the hook: The city will require them to submit a request for a certificate of appropriateness.

"This is not a punitive process," explains commission chair Mimi Sadler, who says she hadn't seen the murals. The commission will consider the murals as if they were still on the drawing board, she says, and then judge if they meet the city's design review guidelines. In the past, the commission hasn't hesitated to tell property owners to undo the work they've done if it doesn't approve.

On Friday, artist and Jackson Ward native Sir James Thornhill was taking photos of the mural at Adams and Broad streets, an homage to the golden days of theater in Jackson Ward. Thornhill joined three others in executing the design of lead artist Hamilton Glass.

The mural was supposed to be painted on two large wooden panels, Thornhill says, but the artists also painted the brick between them with flowers and a cameo of a beaming Christine Banks, owner of the now-closed J.P. Crowder's deli next door. "It really brings the piece together," he says.

Another mural is on the side of the venerable Waller & Co. Jewelers building, where Trask depicted three generations of the Waller family.

Trask praised the city and the sponsors for supporting public art in Richmond and helping create a cultural creative identity. It could be the start of something big, he says.

But he questioned why the city commission would take issue with a beautification project. The Adams Street mural was painted on "decrepit" brick, he says, while his is on a wall that wasn't even visible until the store next door burned down.

The commission's job is "very important," he says. "But there's going to have to be a happy compromise."