It's a measure of how respected Jake Shimabukuro has become within the music industry that his latest album, "Jake and Friends," finds him on equal footing with the big league likes of Willie Nelson, Bette Midler, Warren Haynes. Ziggy Marley, Kenny Loggins, Billy Strings and Jon Anderson of Yes.

Not bad for a ukulele player.

"I know that it's considered a starter instrument to many," says the man that the BBC called "The Jimi Hendrix of the ukulele." "But it's all I've ever wanted to play."

Since he became a worldwide sensation in 2006, the 46-year-old Hawaii native has been taking the small lute instrument, a Portuguese invention popularized in Hawaii, to greater heights. Of his innovative and counter-intuitive way of eliciting tones and sounds out of the tiny uke, Rolling Stone raved that Shimabukuro was "one of the hottest axemen of the past few years who doesn't actually play guitar."

"Growing up in Hawaii, there were so many amazing ukulele players. So much inspiration," says Shimabukuro, calling from his Honolulu home-base as he readies his latest U.S. tour, which sees him appearing at the Tin Pan on Nov. 13. "My biggest inspiration was a man named Ohta-san [Herb Ohta], he was considered one of the first ukulele virtuosos and introduced the ukulele to Asia and Europe. He played different styles of music, which is what I try to do."

Shimabukuro's music is an anything-goes mix of jazz, folk, country, blues and traditional Hawaiian music, with his four-stringed instrument assuming different sonic roles, often sounding like a guitar, a keyboard, even a horn.

"I like having different feels," he says. "It's like painting with different colors. I'll use different types of applications and effects and electronics and can manipulate the sound just enough for it to take on a different voice." He tries not to overdo it, though. "I love the natural sound of the uke, but for instance, on the new record, the track with Warren Haynes, I cranked it to overdrive on the amp." He laughs. "I mean, I've got to be heard." 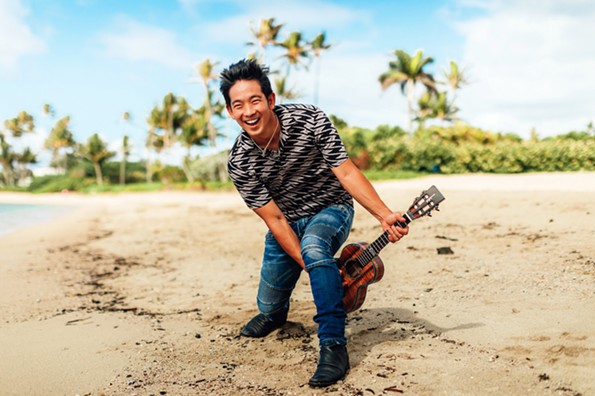 Born and raised in Honolulu, Shimabukuro started playing when he was four. "My mom Carol was my first teacher and taught me a couple of chords." His younger brother Bruce is also a virtuoso, he adds, but prefers teaching to performing. "I'm the opposite. I was a shy kid, but in school I was forced to perform for the first time and I fell in love with it, the rush and the thrill of being in front of the audience. I still feel that."

With the trio Pure Heart, he became a popular performer on the islands, and also in Japan, where he signed a solo deal with Sony Japan in 2002. The fifth-generation Japanese American is still wildly popular in cities like Tokyo and Osaka, where, he says, "they are crazy for the ukulele." But Shimabukuro became an international sensation when a performance from a U.S. television show made the rounds of the internet. "It was in the earliest days of YouTube and was one of the first viral sensations," he recalls.

Shimabukuro's live rendition of George Harrison's "While My Guitar Gently Weeps," shot by a New York TV crew, garnered the attention of millions of viewers, including Bela Fleck, Cyndi Lauper, Yo Yo Ma and other music-makers who sought out his fast, innovative finger picking and fretwork. Jake credits Jimmy Buffett, who took the uke master on multiple tours, and is one of the "friends" on the new record, as a mentor. "He took me under his wing and Introduced me to many of the people on the record, like guitarist Sonny Landreth."

But Ray Benson of Asleep at the Wheel, a longtime friend (who also appears on the new disc), helped get the project rolling. "He said, 'I've got to get you and Willie Nelson together.' The next thing I knew we were in the studio with Willie recording 'Stardust,' and that was the first track we did. Having Willie on board from the get-go gave the project more credibility."

The only problem with touring behind a record made with superstars: What do you do on the road? "That's a joke I sometimes make at the beginning of the concert," he laughs. "Unfortunately, my friends can't be here tonight."

Instead, the uke master is bringing a special, all-Hawaiian, all-star band on tour, which includes the son of his idol, Herb Ohta Jr., another uke virtuoso, and singer Justin Kawika Young, a boyhood friend. "We grew up in Hawaii playing music together. He'll be singing the songs from the new record and we'll also be doing Hawaiian Christmas songs." That includes a special island-flavored stab at the "12 Days of Christmas" that touts six ukuleles, five fat pigs, four flower leis, three dried squid, two coconuts and a mynah bird in a papaya tree.

Presidential nod and a Beatle tribute

The subject of the highly-acclaimed 2012 documentary, "Life on Four Strings," Shimabukuro released a disc that same year helmed by legendary producer Alan Parsons, who sought him out. The result was the ambitious "Grand Ukulele," which featured a 29-piece orchestra backing up Jake live with no overdubs. "Alan is a big man, very tall man," he says of the producer/engineer, who has worked with the Beatles and Pink Floyd and fronts his own Alan Parsons Project. "His ears are unbelievable. He's both laid-back and intense at the same time ... the nicest, sweetest guy."

It's a further measure of his status as an artist that Shimabukuro was recently nominated by President Joe Biden to be a sitting member of the National Council on the Arts, advising on arts and grants funding.

He's also been asked by the George Harrison estate to help with a ukulele tribute record to the late Beatle recorded at Abbey Road studios. Jake is arranging Harrison tracks for the upcoming record including, of course, "While My Guitar Gently Weeps." "George Harrison loved the ukulele," he notes. "He was like an ambassador of the instrument. He'd always carry it around with him and he loved spreading the joy of the instrument."

"I never met George. I wish I had. But I always felt like he had something to do with that video going viral. That was his way of sharing the ukulele with people and using one of his songs," he adds.

"I think that's absolutely something he would have done."