Bikes, firecrackers and PVC: a weekend with the Cutthroats. 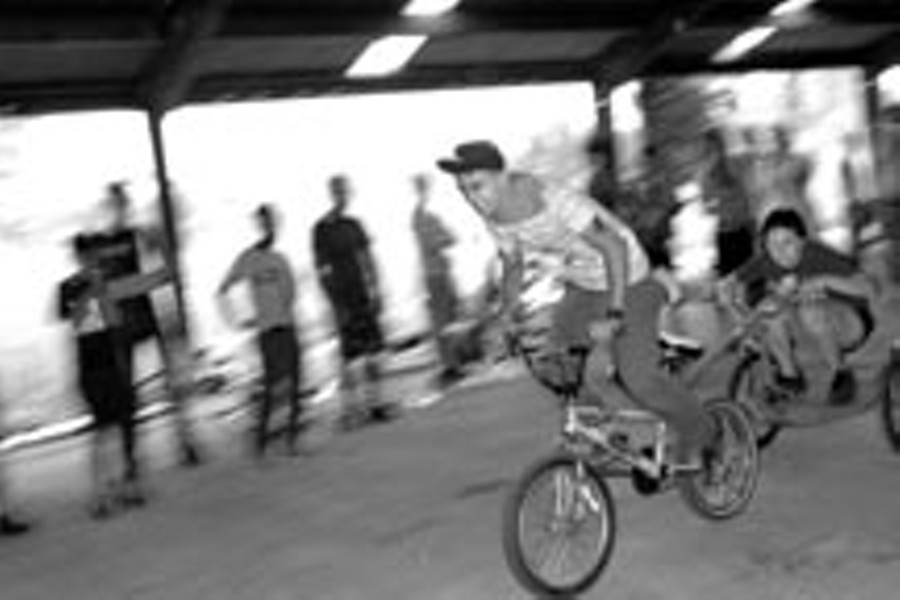 Heaps of bikes and bike parts were strewn everywhere. Some Cutthroats favored denim vests with cutoff shorts or miniskirts with patches and spikes. The riders, most of them skinny from all the cycling, played together, whizzing around and clunking into each other. It looked like the playground at the end of the world.

Dennis Throckmorton, who pays his rent building custom bike frames, built chariots especially for Circus Maximus. He welds them together so that one rider can pedal a bike in front and tug another teammate in a cart trailing behind. The teams crash around on the concrete, running interference by hand or with more elaborate stunts, like firecrackers, to shake their opponents while bystanders cheer.

Standing on the sidelines in an aluminum-foil-covered conquistador helmet with neon orange plumage, Megan Sommers is the unofficial safety marshal. She came prepared with a fanny pack of adhesive gauze pads and two packs of Parliament Lights.

"I think the sissy-bar" — the metal tubing that supports the seats on old girls' bikes — "is bad for the chariot," Sommers tells Throckmorton. Hitching the chariots to the sissy-bar gives the carts a little too much play, she says, making them prone to flipping.

"It's great for the chariot," Throckmorton counters. "It's won almost every single race."

Chariot racing is a new event the Cutthroats invented for the occasion, but there's a whole list of standard games for the rallies.

In footdown, for example, everyone rides in a pack, and the first to put his or her foot down on the ground is out. Shoving, swatting, erratic whistle-blowing, name-calling, beer-can-throwing and interference by means of an inflatable pool raft are all allowed.

For jousting, two brave souls mount the tall bikes and use 10-foot lengths of PVC pipes with padded tips to knock their opponent off the seat.

Despite all the bumps and falls, the average bounce-back time is nothing short of miraculous. Spokes and legs regularly pile up, but no matter how much people on the sidelines wince, the riders bound back, flashing grins.

Scott Krahl isn't convinced. "This is just gonna make them a little bit older a little bit faster," he says. Krahl should know. As a veteran of GWAR's Slave Pit he's done his share of moshing. Today he's just watching.

The Cutthroats have been meeting once a week for the past two years. They have potluck dinners, and each member kicks in $3 for dues to raise money for beer and equipment, like the megaphone used to start chariot races.

Groups from bigger cities tend to be more homogeneous, all punks or all bike messengers. Richmond's team is more eclectic.

"Some of our members are a little bit jocky. We've got kids who are into hip-hop. Richmond is such a small town, we just all get together and have fun," says Lori "Forty" Weaver, a 23-year-old VCU Cutthroat. "I guess we're a bunch of lunatics."

To become a Cutthroat, you must pass an initiation ceremony. Past initiates sat on their bikes for 24 hours straight. One rode on the freeway between exits.

Gail Kelley, whose daughter is one of the participants, says the event is a great way to release creative energy. She marvels at how well the Cutthroats maneuver the bikes during a round of footdown. "It's like a soccer game," she said. "Would I not go?" S