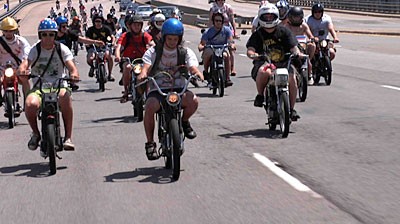 Pat Lowery is the brash leader of a moped gang in a new short film called “Satan Since 2003.” It's no surprise when the Richmonder has a similar attitude on the phone during a recent interview from the Sundance Film Festival in Utah, where he and the film's director, Carlos Puga, are screening the work in late January.

“You're from Style?” Lowery interjects at the beginning of the conversation. “Let's get something straight first,” he says. He has a beef with the magazine, he says, something about a correction to a previous article concerning a Richmond bicycle group that Lowery's gang, the Hell's Satans, is friendly with. It's difficult to tell how serious Lowery is, however, because he quickly drops the subject. “OK, you've got one more question,” he says soon after, to which he responds, “What kind of question is that?”

It's fairly clear that Lowery, who sports a bushy red ZZ Top beard and heavily tattooed arms, enjoys playing the role of the imperious miscreant, which he gets to do for most of the 20 minutes of “Satan Since 2003.” In the movie he's frequently seen barking orders to, when not pontificating about, his fellow Satans, a group made up mostly of young men, often shirtless, who cruise around Richmond on mopeds with loud two-stroke engines when not downing Pabst Blue Ribbon near the river.

The film's central narrative concerns the Satans' origins and incipient rivalry with other moped gangs around Richmond — hipster, punk and African-American factions who, Lowery explains on camera, have staked claims to various parts of the city. The Hell's Satans have an especially volatile enmity with the punk group over turf and pranks taken too far. In one scene, Lowery lounges in a chair while another Hell's Satan leisurely paints over their graffiti — payback for an offense. Later, Lowery's best friend, Hippy, is purposefully run over by the rival gang. Plotting more revenge, Lowery constructs a homemade bomb from a milk jug and batteries.

Most of the scenes feel so authentically Richmond, it's difficult to tell the doc is a fake. “Satan Since 2003” is a mockumentary, concocted by director Puga, whose previous work was for MTV's “True Life” series. Directing reality TV helped him integrate truth with fiction to the point where it's not easy to tell the two apart.

Evidently the Hell's Satans themselves are real, in that they really is a group of moped enthusiasts, about 20-30 strong, that really does like to party. (The group took its name from a parody on “The Simpsons.”) Everything else is exaggerated. There are no rival gangs, at least not official ones.

Taking a break from a hectic Sundance schedule, Puga says he'd been searching for a mockumentary subject long before he met the Hell's Satans, something like “True Life” that he could “inject some fun into.” A circuitous route through several friends and cities brought him to Lowery and his group. The two presented the film to audiences at Sundance as a real documentary, though Puga says the truth always came up during the Q&A. “Most everyone thinks it's totally real,” he says.

For his part, Lowery thinks “the final product turned out great,” though he regrets that the movie doesn't reveal the real Hell's Satans. They do charity work, too, Lowery says: “I'd much rather be known for that.”

For information on “Satan Since 2003,” go to standardarts.com.