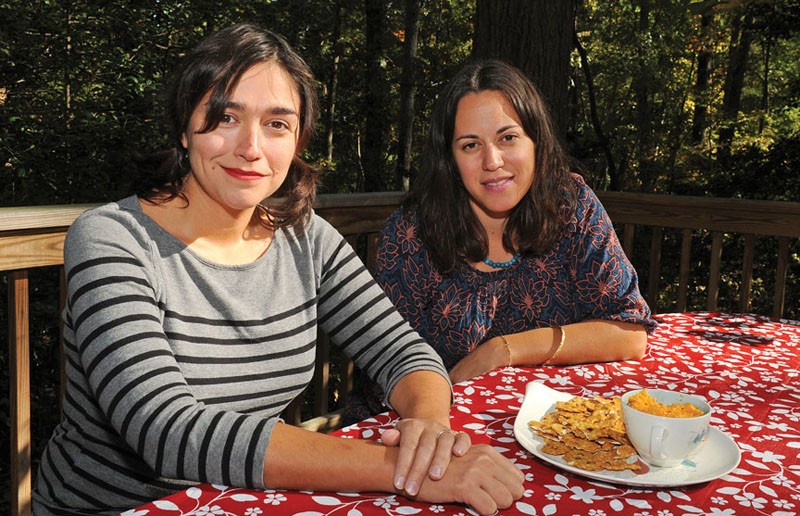 Those words from a young New York woman pretty much sum up the Northern understanding of this Southern delicacy — if that’s the right word for a glop of cheddar, mayonnaise and pepper bits.

Nicole Lang, a Richmond food blogger and pastry chef, wants to introduce everyone to the glories of pimento cheese. So, with the help of money from online fundraising engine Kickstarter, she and film editor Christophile Konstas spent the last year filming a documentary titled — what else? — “Pimento Cheese, Please.”

Lang, who runs a commercial bakery in Scott’s Addition called Dollop Desserts, was born in New York City and raised in New England. Southern cuisine was utterly unknown to her: “I didn’t have collard greens. Biscuits, no.” Then, while searching online for a novel hors d’oeuvre to make one Christmas Eve, she discovered pimento cheese.

The first recipe she made was Paula Deen’s, spread on a broiled baguette. Lang fell in love. “It has cheese. It has mayonnaise. And it’s spicy,” she says. “This is like my favorite thing on earth.” Her New York friends were impressed too. “What is this? It’s awesome,” they said.

Lang’s mission: To cure Northern ignorance of this Southern dish. For the documentary, she traveled the South tasting pimento cheese and interviewing cookbook authors and chefs — including Jason Alley of Comfort and Frannie Rawlings, co-owner of the Dixie Restaurant in Petersburg.

Some said grated onion: “That’s just hideous.” Others said “no way” to garlic. Still others eschewed sugar. “It’s very dividing,” Lang observes. Yet she hesitates not at all when asked about the best vehicle for pimento cheese. “Celery rib. First of all, it makes you feel less guilty,” Lang says. “Also, it has that snappy crunch to it.”

Pimento cheese-oisseurs can pick their own favorite at the short film’s Richmond premiere, which will feature tastings of pimento cheese from eight restaurants. The premiere will be presented Wednesday, Nov. 9 at 7:30 p.m. at the Hippodrome Theater in Jackson Ward. Tickets are $8, and proceeds benefit the Southern Foodways Alliance and the Historic Jackson Ward Association.