Scott Elmquist Brianna Schwartz, founder of Yenta + Posha, shows off some of her insoles designed with the help of a pediatric orthotist.

Portland, Oregon, is well-known for being the home of major brands including Columbia and Nike. Now Richmond may be taking some small steps in that direction.

Rider Boot Shop and Stegmann Clogs have been quietly pushing their shoes out all around the globe from the region for a while. This fall two footwear names in town joined them: Kinis and Yenta + Posha. While one is a fitness brand and the other designed for professional women, both share a similar creation story.

"I was on my feet all day, sometimes days at a time," says Yenta + Posha founder Brianna Schwartz. "I eventually began scouting in other countries. I was meeting with so many other people in different cultures, I had to look polished."

That meant some pretty painful feet for the former meeting and event planner.  Schwartz first tried to use insoles to comfort and support her feet but soon realized that the insole she needed wasn't on the market. So she decided to make the insole she wanted for herself. "I tried out 10 different insoles and I took little pieces of each I liked," she says.

After creating a prototype, she took it to a podiatrist and orthotist for advice and guidance. "I was really wowed when she showed me her prototypes of the insoles," says Ksenia Major, an orthotist at Valentine Orthotics and Prosthetics. "As someone who is on their feet all day and working with the bio-mechanics of the feet daily, I was excited to see a shoe address the natural gait biomechanics while not looking like an orthopedics shoe."

After tweaking her design, Schwartz began gathering her materials and building her brand. She's been raising capital through a crowdfunding campaign online to get the first line off the ground and onto the feet of customers. While she didn't hit her initial goal of $50,000 by this time, her first investors will receive their shoes by February, she says. She plans to continue to grow her brand online.

Unlike Schwartz, Vincent Vu, founder of Kinis Co., designed his footwear for his hobbies after he clocked out of work.

"All my adult life, I'd been very active," he says. "My time at the gym is compressed, so I wanted to do what I could to maximize my workout routine."

Vu switched from weights to cardio, which includes running. He became attached to running on the indoor track at ACAC in Short Pump. He sometimes would run as far as 15 miles a week. After 10 weeks of this schedule, his new passion became painful. He unsuccessfully invested in expensive running shoes, but nothing seemed to stop the pain. Research led him to the book "Born to Run," written by journalist Christopher McDougall, who details a thorough argument for almost-barefoot running.

Vu read more and searched for minimalist running shoe options. Like Schwartz, he couldn't find what he wanted. So he headed to the craft store to make it himself. He bought an assortment of foam sheets and cut them to the shapes of his heels and the balls of his feet. He tested them out on the track.

"Everyone's looking at me like I'm an idiot," he says. "Over time, though, my feet got stronger. I wasn't in so much pain."

More people could benefit from his concept, he thought. Vu worked with local trainers and professional athletes to test out prototypes of his socklike footwear.

"The first time I tried the socks and compression gear, I loved them," says Dave Robinson, co-founder of GS Nation, a fitness company. "I loved the messaging of getting back to the foundation of movement."

After adjusting the design and finding the right material sources and manufacturers, "it was time to find a way to take it to the market," Vu says.

The first Kinis product, the Nomad 804, was launched last November. It's made with Honeywell Spectra fiber, a material used in military and law enforcement ballistic vests. It was launched with several high-performance socks as well. The local fitness community has embraced the initial products and is helping spread the word. 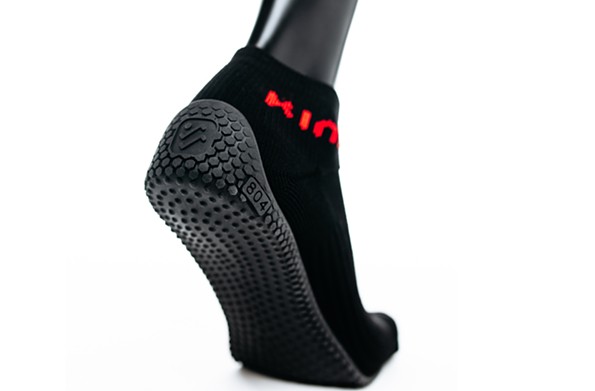 "As both an athlete and a coach, their products are extremely comfortable and support natural movement which helps to prevent injury," Robinson says. "I would often have my clients kick off their shoes before performing compound lifts like deadlifts or squats or before doing balance and stability work. Now many of them, including myself, train in Kinis instead."

Robinson competed in the Obstacle Course Racing World Championships in London in October, with Kinis as a sponsor. He's introduced other athletes to the brand and the Nomad.

"We don't want to just be a one-hit wonder," says Marc Oosterhuis, Startup Virginia mentor and marketing manager for Kinis. "Vincent has lots of ideas and the Nomad is just the first." Outdoor training, barre and yoga footwear are already in the works. Kinis will again lean on the fitness community to test products and introduce the community to them.

"There are so many gyms and boutique fitness, yoga and boot camp studios here, not to mention the trail system and the James River," Robinson says. "I think there is a big market for this type of product here."

Learn about Yenta + Posha online at yentaposha.com and about Kinis at kinis.com.