“Plastic Tree” is a work by Pascale Marthine Tayou, a Cameroonian artist whose art raises questions about globalization and postcolonial culture.

Endless cars drive down a highway. A camera pans across a derelict town with empty parking lots and worn-out buildings. A greenhouse with overgrown plants sits abandoned.

These images, mostly devoid of people, make up David Hartt's film from this year, "The Last Poet." It is overlaid with words spoken calmly by a male narrator about economics and politics, including the effectiveness of the tea party and Donald Trump and the anxiety of the white working class. The narrative is appropriated piecemeal from many texts: the writings of theorist Francis Fukuyama, Samuel Delany's dystopian science-fiction book, "Dhalgren," or Keorapetse Kgositsile's poem, "Towards a Walk in the Sun."

Eventually one notices that some of the film was shot in Richmond as Belle Isle and Main Street Station appear. But it's not just Richmond. Instead, Hartt has filmed sites in one city after another along the Eastern Seaboard, a nod to Robert Rauschenberg's earlier work from 1980 that recorded his trip from New York to Florida. It's also an attempt to showcase the monotony of America by highlighting one town blurring into the next: Philadelphia into Baltimore into Richmond.

It's a bleak opening statement to the Institute for Contemporary Art's "Hedges, Edges, Dirt," but one that is poignant like the rest of the work in a group exhibition that straddles truth and fiction, politics and beauty, and notions of belonging and displacement.

"The work [in the exhibition] is very nuanced and it's very contemplative," says Assistant Curator Amber Esseiva, who co-curated the exhibition with Chief Curator Stephanie Smith. She cites another work, Abbas Akhavan's "Untitled Garden" (2008/2018) to prove her point: A hedge of cedar trees is placed in the Reynolds Gallery and it confronts visitors immediately.

"One sees a hedge in a gallery and it's a really cool object and it's beautiful," explains Esseiva. "[But] it's a physical barrier that's going to affect your body in the space. It's going to take a while for a viewer to say, 'you know what, that is a political move to stop the way my body moves through the space' … so you can't read the show all at once."

Alongside this exhibition, the museum also unveils "Provocations: Rashid Johnson," a site-specific, commissioned project titled "Monument" by the Chicago-based multidisciplinary artist. The installation is an immersive sculpture that visitors can walk through. A large steel scaffold holds materials including plants such as aloe vera, as well as shea butter, film footage and books like James Baldwin's "The Fire Next Time" and William Faulkner's "As I Lay Dying." 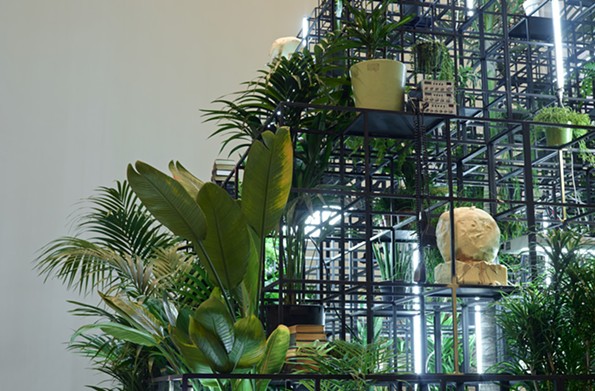 While the work is up, artists — mostly local, like the choir from First African Baptist Church of Richmond — will perform alongside the installation. Unlike other museums, the galleries will remain open during installation to offer visitors a chance to see behind the scenes.

"I don't know of many institutions that would be comfortable and generous in this way," Smith says. "We're really encouraging people to stop by and take a peek through the glass doors to see what's happening inside."

Since "Declaration" opened April 21, the museum has welcomed more than 50,000 visitors. Now with the school year in full swing and the arrival of newly appointed Executive Director Dominic Willsdon, there is a fresh sense of energy.

Smith says its been amazing having college students back.

"[At a recent artist talk], we were at full capacity in the auditorium and had to bring extra chairs out," she says. "We have these different intersections where you've got a wider audience coming in from the city, the campus, colleagues coming in internationally. It feels like that intersection is right where we want to be."

Capitalizing on that energy will be tasked to Willsdon as he also raises money for the museum's endowment.

"This next phase of working to secure major gifts is about putting that foundation there for the sustainability of the institute long term," Willsdon notes. "A lot of people that were working on that were waiting for me to get here to really begin in earnest." S

"Provocations: Rashid Johnson" and "Hedges, Edges, Dirt" open at the Institute for Contemporary Art on Oct. 17. For information, visit icavcu.org.