A pair of Richmond’s finest old-school artists have a joint show at Black Iris Gallery. 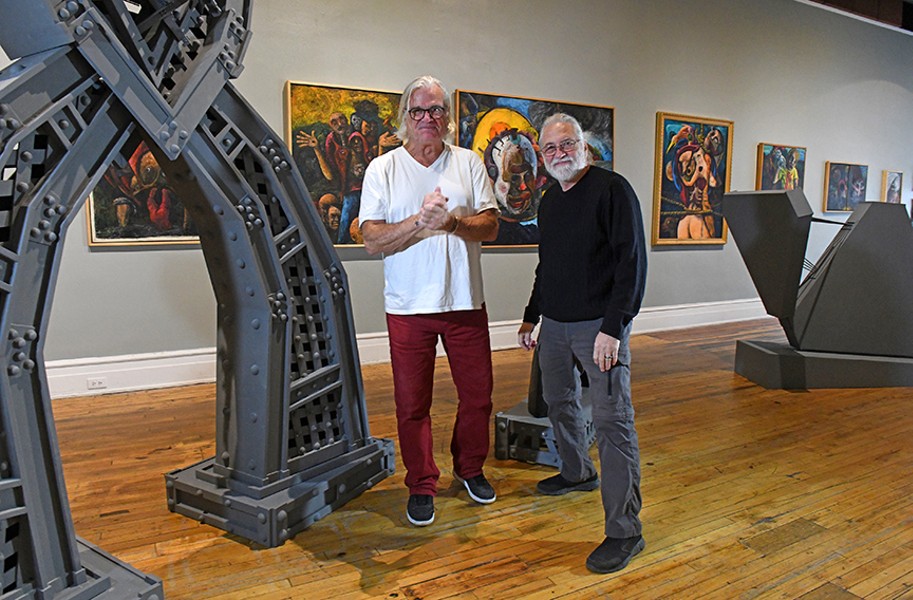 Two long-haired grumpy men, each gray and sporting a week’s stubble, perch on stools and blab away, drinks in hand. Darryl Starr and Wolfgang Jasper recently met downtown to catch up and discuss their aggressive art. Starr’s sculptures temporarily populate the refinished wooden floors, and Jasper’s paintings and drawings hang cheek-to-jowl on the freshly painted gray walls of the Black Iris gallery on West Broad Street.

Why the frowns? Wouldn’t you be grumpy if glaringly bright yellow, third place ribbons dangled next to your artistic output?

Truth to tell, the artists themselves placed the ribbons there as part of the show, “Famous Duo,” in a pre-emptive strike both ironic and tragicomic. These two are among Richmond’s finest fine artists — sorry about the alliteration -- but it’s true. These septuagenarians have been plying their craft and exhibiting together here since 1985, about as long as anyone in town. And Jasper has been a treasured teacher to many. Still, they consider themselves outsiders and pout that the vagaries and vogues of the artistic landscape here have passed them by.

“You know, our generation is considered totally irrelevant,” Jasper says. “But when I see what’s going on [with the current generation], it bores the s - - - out of me.”

Starr agrees: “We’re old men here. The other night at the opening I saw some people looking at Wolfgang’s work and a young guy was amazed that he had used a palette knife to make his paintings. That’s not a stroke they know. I overheard another guy say that Wolfgang used comic book colors, that there was no subtlety of shading. Wrong.”

Both men are tickled at the large turnout for their opening Nov. 1 during a First Friday Art Walk. “The place was packed,” Starr says. “I understand a thousand people came by,” acknowledging that Black Iris enjoys extended hours since it is a social club, but makes its handsome, Broad Street-facing front space available for exhibitions open to the public .

“How many people did 1708 Gallery have next door, 17?” asks Jasper gleefully of the venerable, but achingly au courant artist-owned gallery that shows top-tier talent. “I’ve yet to see a drawing or a painting there. Now it’s all about doorknobs.”

He says he and Starr had approached 1708 about playing host to this show, but were turned down, even though Starr was an early member of the organization and that both he and Jasper have exhibited there previously.

“They think that we’re has-beens, that we’re old and grizzled,” says Starr picking up on Jasper’s drift. “We’re both cynical.”

The two men have exhibited together previously, although their work could not be more different. Says Jasper: “We complement each other.”

The 25 works that Jasper is showing contain densely packed imagery of human visages and bodies, of emerging forms and contorted, even freakish faces. His line and drawing are heavy and assured. His multicolored work incorporates hues that are intensely jewellike, definitely not comic book colors as the opening night patron had observed. Jasper is a master renderer and the German-born artist takes more than a few cues from Hieronymus Bosch, a 15th- and 16th-century Netherlander who worked near the German border to produce virtuosic paintings that are unflinching in showing humans as sinners damned to hell. Unlike the medieval painter’s works, however, which contain tiny figures, Jasper paints his haunted figures large, and in-your-face. This is not doctor’s office art.

Starr is showing far fewer pieces in this outing, but they are as bold in impact, albeit with monochromatic simplicity, as Jasper’s work. The sculptures are bulky, hulking, black abstract forms. Some appear to have been formed naturally like chunks of coal. Others might have been the product of a steel- and iron-era culture. Think the Roebling Co., engineers of Brooklyn Bridge fame, meets “Transformers.” Not surprisingly, native Virginian Starr spent much of his adult career in New York and his aesthetic was shaped by the powerful buildings, roadways and bridges there.

It was in Shockoe Bottom, under the spaghetti works of interstate highway flyovers and railroad crossings, where Starr and Jasper shared studio space for 12 years. Rent was low, but conditions left much to be desired. “We used to chase rats with a dustpan, and were flooded out twice,” Jasper says. “Then the place burned down.” Starr moved to New York where he made art and found success as a fashion model. Jasper opened a photography portrait studio here.

Now they are reunited, making art—their way—and keeping personal expectations low. There may be third place, yellow ribbons on Black Iris’ walls, but no red dots. Nothing has sold.