Indie-pop couple Wreckless Eric and Amy Rigby carry on, money or not. 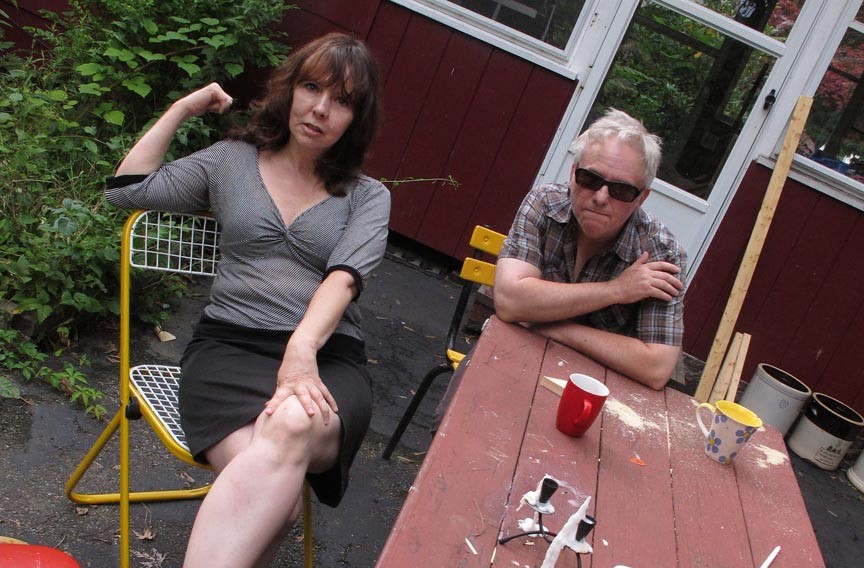 Musicians Eric Goulden and Amy Rigby shared a room for the first time in 2000. The site of this crucial event was the Bull Hotel, a pub in East Yorkshire, England. Considering their histories, you'd figure they would have occupied the same place at the same time before.

Goulden — an Englishman better known as Wreckless Eric — was active in the punk and pub rock scenes during those genres' salad days in the 1970s. Since then he's been part of a smattering of bands. A singer and songwriter, Rigby rose from New York City at the tail of the '80s. She played in a handful of groups too, and was a prolific presence through the '90s (many people consider her 1996 album "Diary of a Mod Housewife" a classic concept album).

Then one night, Rigby was playing the Bull Hotel when Goulden stopped by for a DJ set. Goulden had been playing the pub since the early '70s and even performed "Whole Wide World" — a hooky, lovestruck, pub-rock-gone-power-pop confection — there before the song was committed to record. That night, Rigby happened to cover Goulden's trademark tune when its creator was in the building.

Rigby recalls going to Hull, right in the Bull Hotel's area, perhaps for the third time, "and it was kind of a cold and not very glamorous place," she says. "People would always say, 'Why do you go play in Hull of all the places in England?' And I didn't really know, but they seemed to like me there."

When she knew Eric was coming, she says she was excited to meet him — "and, of course, nervous." She was told he lived on a boat, making him even more of a fascinating figure, she recalls, warmly laughing: "Then, I found out how dull he really is."

Nowadays, Rigby, 54, and Goulden, 58, are married and musical collaborators. After getting hitched they released their first album as "Wreckless Eric & Amy Rigby" in 2008. ("A Working Museum," their third and latest record, arrived last fall). The upstate New York-based pair concocts indie pop that emphasizes harmonies, sly storytelling, a charming simplicity, and the notion that each other's stylistic preferences are actively converging. Rigby brings in flavors from girl-group pop and sparse alt-country while Goulden's interests lie in electronic music and classic blemishes-and-all punk. The veterans have no qualms about mashing up their specialties.

"Basically, if we like to do something, that's what we'll do," Goulden says. "If I have a loop of a funny bass line and Amy has a chord progression, we'll put them together and we might get something like 'Valley Liquors,'" a reference to the trippy, proto-trip-hop tune off "Museum."

That room in 2000 aside, Goulden and Rigby have shared lots of things: tour vehicles, stages, records, residences and the sense that playing and making music feels too right to ever leave behind.

"You think, 'Oh God, how come people are earning a living, but we're not?' But it doesn't matter," Goulden says. "No one's earning much of a living at the moment, so we might as well carry on doing what we're doing and earn not much of a living." S