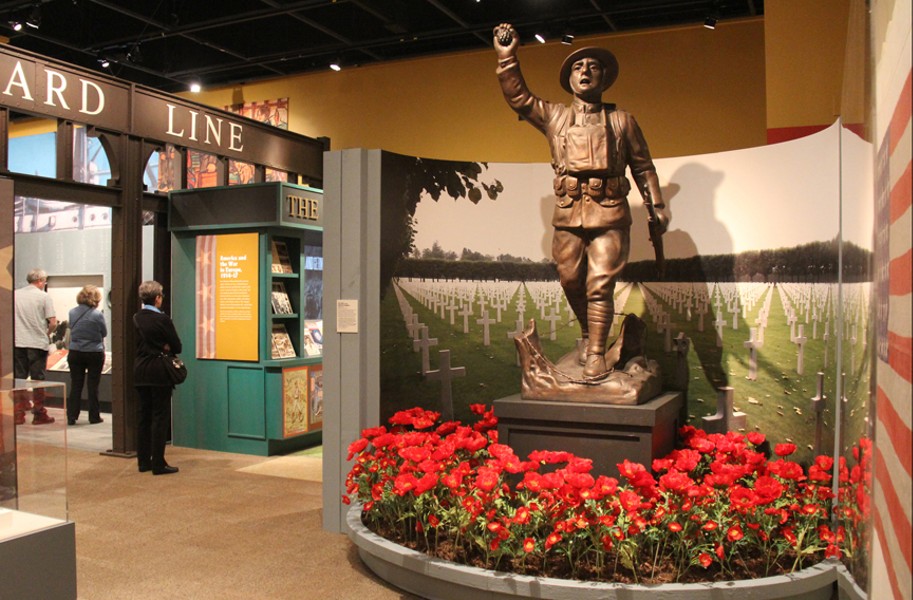 Virginia Museum of History and Culture

If you think the term slacker is a vestige of the grunge era, think again.
The pejorative term originally got traction when it was widely used to describe men who avoided military service during World War I. A third of all draft evaders were rural Southerners who either didn't register for the nation's first draft or deserted after being inducted — slackers.

"World War I America," a traveling exhibition produced by the Minnesota Historical Society, makes its only East Coast stop at the Virginia Museum of History and Culture, formerly known as the Virginia Historical Society, on the centennial of the Great War's end. As befitting a 21st century look at a transformative period in the nation's history, the exhibit tells the stories of more than just white men.

A YWCA wartime poster proclaims, "For every fighter, a woman worker! Back our second line of defense." The Women's Peace Parade in August 1914 was considered one of the nation's first anti-war protests, albeit a segregated one, with more than 250 black women marching together at the back of the parade.

Entrepreneur, philanthropist and civil rights activist Madam C.J. Walker may be known as the country's first female self-made millionaire, but she also organized the Negro Silent Protest Parade in 1917, a reaction to recent race riots in East St. Louis.

A full-scale replica of an ambulance brings to mind Ernest Hemingway, but its six interactive buttons allow visitors to hear the words of those who served at hospitals as enlisted men and volunteers.

Around the corner stands a tribute to 26-year-old Alice O'Brien, who felt compelled to volunteer by driving a Red Cross supply truck, serving in the canteen and helping treat wounded. Her letters home detail a desire to escape the harsh conditions on the front and an unwillingness to leave while the need was still so great in 1918, the war's final year.

"The exhibit is about remembrance," says the museum's president, Jamie Bosket. "First and foremost, this is our last best chance to talk about this war and we're using this exhibit to show its effect on Virginia and the world."

Bosket points to the lessons about global interactions that are as relevant today as a century ago. The innocuously-named Committee of Public Information was nothing more than the country's first domestic propaganda agency, charged with boosting patriotism and morale by managing the information flow from government to populace. One ham-handed poster demands, "Are you 100% American? Prove it! Buy U.S. government bonds," while another, directed at women, is a bit softer: "Our boys need sox! Knit your bit!"

A companion exhibit, "The Commonwealth and the Great War" addresses Virginia's contributions to the war effort, including sending more than 100,000 men to fight and building military bases — at Fort Lee, Quantico, Newport News — to meet the war's demands.

There's even a love story. Henry Anderson, one of the founders of Hunton and Williams, went overseas as Red Cross commissioner to Romania and the Balkan States and became romantically involved with Queen Marie of Romania, a move that ended his engagement to Virginia novelist Ellen Glasgow.

Artifacts abound from a helmet split by shrapnel to a deck chair from the Lusitania, the sinking of which became a flashpoint for many hoping to stay neutral. For those to whom WW I is a distant history book lesson, the exhibit's frequent interactive elements — films, music and audio — make it more of a cultural immersion. Magician Harry Houdini was enlisted to teach troops how to escape from handcuffs. Sunglasses originated with British soldiers in the Middle East during the war then were used by French soldiers scanning for aircraft. By the 1920s, movie stars and beachgoers had adopted them.

Immigration is another issue tying the war years to the present. The 1910 census showed that one in seven people living in America was born in another country, the highest percentage since the formation of the United States and a rate still unsurpassed in 2018.

"We can't forget that this was referred to as the war to end all wars," Bosket explains. "But history tends to repeat itself." S

"WW I America" and "The Commonwealth and the Great War" run through July 29 at the Virginia Museum of History and Culture, 428 N. Boulevard. Admission is free for veterans and active-duty military people. virginiahistory.org.