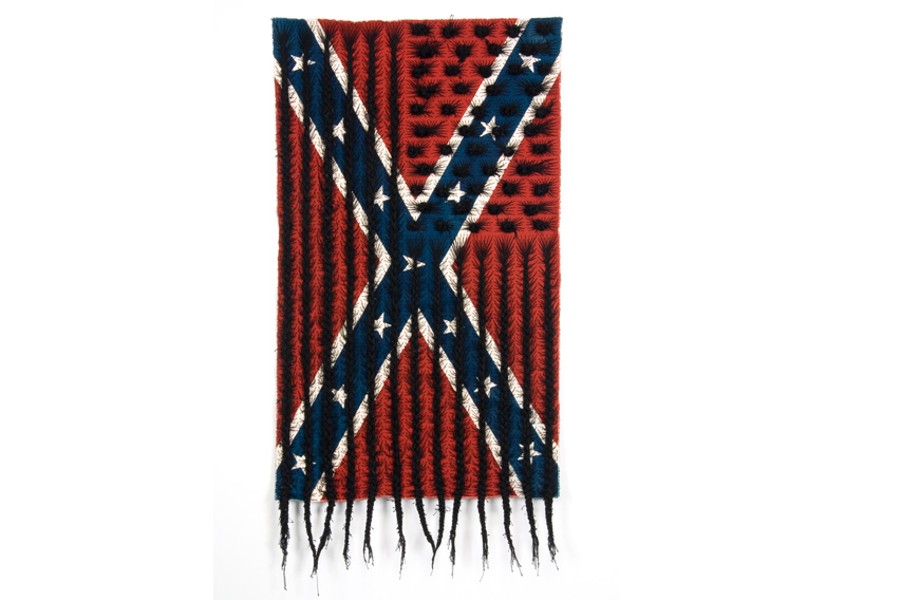 Acclaimed local artist Sonya Clark’s “Black Hair Flag” is one of the provocative pieces in “Fusion: Art of the 21st Century” at the Virginia Museum of Fine Arts. The show was curated by the museum’s John Ravenal, who is leaving to become executive director of the deCordova Sculpture Park and Museum in Massachusetts.

Collecting contemporary art is tricky. Since the 1960s, visual art, which once included just painting and sculpture, has opened up to include video, digital, participatory art, photography, performance, site-specific, installation, sound and idea-based work. The list keeps growing.

With this kaleidoscopic landscape, it’s difficult to know which artists will continue to garner attention decades later. High-dollar values and critical attention don’t automatically generate market or art-historical merit in the future.

So, here’s the conundrum: Because current art-making practices are still being defined and will keep being redefined, how do you decide what work is successful and valuable? Institutions with encyclopedic collections, like the Virginia Museum of Fine Arts, typically negotiate this problem by taking conservative and careful steps.

Outgoing curator John Ravenal’s exhibition, “Fusion: Art of the 21st Century,” does just that by favoring mainly two-dimensional media over experimental works. Acknowledging the nebulous field of practices, the exhibition sets up a sharp incongruence between what’s shown and what’s said. In the didactic text, Ravenal explains — further underscored by his inclusive title, “Fusion” — that contemporary artists are exploring new forms of untraditional media and technology in order to comment on their current condition.

But something different is shown. Out of nearly 30 objects, most of the works are two-dimensional and hang on the wall, such as Angel Otero’s “Untitled (SK-MY)” (2013). Some, including Henrique Oliveira’s “Xilempasto 6” (2013), diverge slightly by offering high relief or sitting in a shadow box, as seen by Sonya Clark’s “Black Hair Flag” (2010).

There are just two works of “in-the-round” sculpture: Radcliffe Bailey’s “Vessel” (2012), which really is an installation and still heavily dependent on the wall support, and Wendell Castle’s “Blue Noon” (2007), which sits uncomfortably in the corner on a raised platform.

Experimental media, such as sound, performance, participatory or video works, aren’t present. Thus, while acknowledging the possibility of inclusivity, “Fusion” provides a focused look heavily indebted to the language of painting, two-dimensionality, and traditional categories. Unfortunately, given its written claims, it leaves audiences with a limited perception of what’s happening in contemporary art.

Rather than asserting the holistic title, “Art of the 21st Century,” the exhibition could benefit by focusing on the themes it does well: two-dimensional work, identity, race and globalization. Much of the art underscores race and post-colonial theory coincidentally at a time of intensified racial relations.

Clark’s “Black Hair Flag” is a wall hanging with black braids sewn onto a handmade Confederate flag. Sally Mann’s “Untitled (Antietam #18)” (2001), a gelatin silver print and darkly poignant meditation on the site of the bloodiest battle of the Civil War, hangs beside it setting up a clear dichotomy. Clark is of Afro-Caribbean heritage and Mann is white. Clark is quickly becoming a rising star and Mann, now a Virginia darling from Lexington, sowed her oats in the late 1980s and early ’90s.

Globalization and the passage of time are other key themes. Julie Mehretu’s “Stadia III” (2004) speaks to the continuous remapping of geopolitical lines on a painted, waxy surface that literally pulls the viewer into the consuming field. Her paintings are beautiful and strongly visceral. Dean Byington’s “Two Harbors” (2012) also alludes to the passage of time and geography in his meticulously rendered linear painting.

The recurring “Pamela K. and William A. Royall Jr.” label is inescapable. Many of the works are loaned, donated or paid for in portion by the Royalls, a powerful art-collecting duo who continue to shape Richmond’s contemporary art scene in a way akin to another earlier couple: Sydney and Frances Lewis. Given their prominent position financing much of the work, why not devote an exhibition to the collectors themselves, thereby critically scrutinizing their particular vision, buying history, and its intricacies? Better yet, invite an artist or guest curator in as a neutral voice to curate the exhibition.

The exhibition must be seen not as a prescription of 21st-century art, but rather one particular brand with a few nuances. It marks instead an entrance for exploring “art of the 21st1 century” as an open question that requires interrogation and exploration. As an invitation, it compels the viewer to get outside the institution and begin a journey in search of the new, the experimental, the alternative and the lasting. S