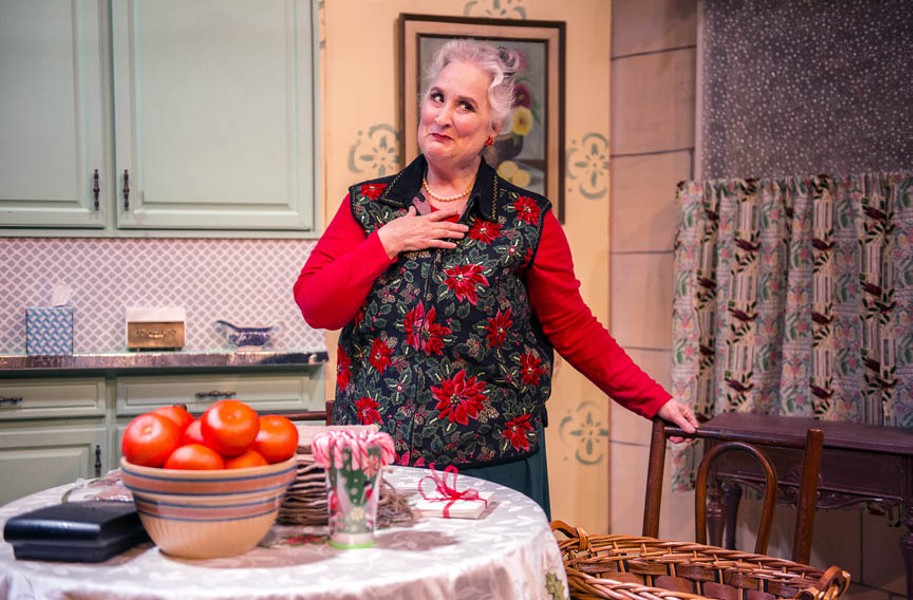 Sometimes, the holidays can be a bit much.

It's the time of year when family gets on your nerves, movies bend toward the saccharine, and, as you gulp down your fifth tumbler of eggnog, even the drinks seem too sweet. Luckily for those in a Grinchy mood, Richmond Triangle Players' current show offers a dark fix during the Festival of Lights.

In "Season's Greetings," Jones plays cheery housewife Jocelyn Dunbar. With the holidays approaching, Jocelyn is drafting a Christmas letter, detailing the Dunbar family's recent news. It's been a rough year for Jocelyn, what with taking care of her drug-addicted daughter's premature baby, learning of her husband's infidelity when he served in Vietnam, and having his resulting Vietnamese daughter suddenly arrive on her doorstep. It's enough to push anyone over the edge — and in Jocelyn's case, it has — but she refuses to let her troubles dampen her holiday spirit.

Jones is cheerfully demented as Jocelyn, all sweetness as she describes the terrible circumstances she's both endured and perpetuated. It's a testament to both director T. Ross Aiken's pacing and Sedaris' skill as a writer that the one-act's plot turns come off as funny and surprising instead of just upsetting. Jocelyn's racist impressions of her Vietnamese stepdaughter surely won't win her any awards for political correctness, but spouted by such an unhinged narrator, it still comes off as more funny than offensive.

Based on the essay that made Sedaris famous, "Santaland" mines the humorist's real-life experience working as a Christmas elf at a Macy's department store for laughs. Donning a green velvet costume and dubbed Crumpet, Sedaris walks through the front-of-house and behind-the-scenes machinations of working for Big Kringle.

Playing the Sedaris part, Throckmorton brings his usual commanding presence and comedic timing to the role. Throckmorton is one of those performers who always seem at home on the stage; even when he briefly lost his place opening night, he quickly recovered. He's very funny in his recounting of the bad behavior of Macy's' visitors, and does a great impression of Billie Holiday singing a Christmas jingle to boot.

From Vietnamese sex workers to manning Macy's' vomit corner, a mirrored wall where kids tend to toss their tinsel, this duo of one-acts remain a dark holiday favorite. As this show demonstrates, perhaps we all need a little bit more soot in our stockings this Christmas. S