Ron Howard's “Frost/Nixon” winning Best Picture would be a trick worthy of Dick. 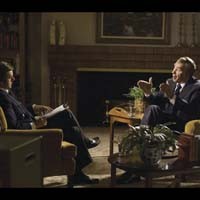 Try to think of a memorable depiction of such postwar presidents as Truman, Ike, JFK and LBJ, and all you're likely to come up with is a handful of drab and dutiful made-for-TV biopics. Nixon, on the other hand, has continued to cast a long shadow not only on American politics, but also on the box office. The role of the disgraced and many-sided president has proved a fascination for actors and writers alike.

Anthony Hopkins brought a Shakespearean grandeur to the role in Oliver Stone's “Nixon” (1995), sharply contrasting both Dan Hedaya's bumbling swindler in the most enjoyable, the tartly titled “Dick” (1999), and Philip Baker Hall's whacked-out anti-hero in Robert Altman's “Secret Honor” (1984). Now Frank Langella, one of Broadway's reigning Scene-Stealers-in-Chief, gets his bite at the Nixonian apple.

Director Ron Howard, alas, doesn't give him the setting for the really probing or unsettling performance that might have been. Instead, the director of “Apollo 13” and “A Beautiful Mind” serves up a merely pleasing, vaguely edifying tale of penitence and redemption, or something like that, sauced with the spine-straightening patriotism and moral uplift in perennial favor with the Academy of Motion Picture Arts and Sciences.

Based on the play of the same name, whose author, Peter Morgan, also wrote the screenplay, “Frost/Nixon” chronicles the taping of Nixon's first post-presidential interview, an epic 30-hour affair that was pared down to six hours of prime-time television. The interviews won a remarkable audience share, elicited some grumpy apologies from the rheumy-eyed obstructer of justice, and brought David Frost a nice profit and a measure of fame in America. All in all, it put a rather longwinded punctuation mark to an episode of American history that had already provided dozens, maybe hundreds, of hours of far more riveting televised spectacle — the Nixon era itself.

The conceit of the film, on the other hand, is that this armchair face-off was a matter of great moment, both to the republic and to the antagonists, who both hope to emerge from the interviews transformed. If Nixon wants to clean up his image (while collecting more than a half million dollars in the process), Frost hopes to become something more than the variety show host and purveyor of fluff familiar to British and Australian audiences.

Michael Sheen's Frost, like his Tony Blair in another Peter Morgan film, “The Queen,” is something of an amiable hollow man, someone in need of a trial to bring out his hidden depths. A dab hand at beguiling actresses with his slightly cheesy fame, he wants something better, especially if it comes in the shape of a gorgeous brunette (Rebecca Hall) reading “Middlemarch” on the flight to L.A.

Sheen does a fine job evoking the pathos of a man who knows he's won, as one of his associates says, “great fame, without possessing any discernible quality,” but it's Nixon who captivates our attention. The preternaturally crafty performer endows the ex-president with a highly improbable degree of suavity, given that Nixon may have been the most graceless man to occupy the Oval Office this side of James Knox Polk. Certainly there's the ranting and delirious self-pity that are obligatory in any Nixon portrait, but Langella's Nixon is also a worldly charmer, perfectly capable of reducing his enemies to mush with a smile, or impishly throwing Frost off kilter with a reference to his “effeminate” Italian shoes (“Well, I guess a man in your profession can get away with it”).

But “Frost/Nixon” has a chip on its shoulder. It works too hard to prove its own significance, such as during its flashes forward to a fictional documentary. At such moments we're asked to believe that, as one Frost aide breathlessly puts it, “the integrity of our political system of democracy entirely depends” on wringing an on-air confession from the already-disgraced and impotent president No. 37. Perhaps it's natural for Ron “Opie” Howard, literally a child of the media, to suppose that a televised pseudo-event served some great purpose in world history, but he gives us little reason to believe it.

It must be said, though, that Howard knows his audience. “Frost/Nixon” is in the running for five little gold men, including Oscar awards for best picture, director, adapted screenplay, editing and actor (Langella). Although it's often fun, it doesn't have the integrity or verve of a “Milk” or a “Slumdog Millionaire,” and probably doesn't deserve to win. But then neither did Richard Nixon. (R) 122 min. HHHII S