A lifelong gymnast and former stunt double is hosting a new statewide competition in the West End. 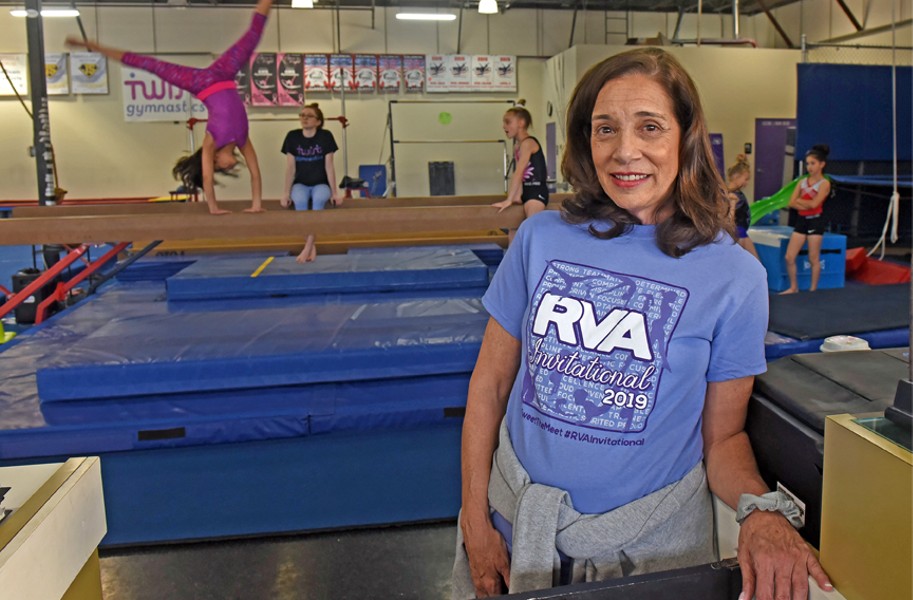 Scott Elmquist Lisa Cain opened Twist Gymnastics in 2010, and on April 14 the gym will host its first statewide invitational.

Lisa Cain has always been brave. Over the course of her life she's competed in an Olympic trial, pursued an acting career in New York, performed film stunts like climbing a ladder hanging from a helicopter and moved to an unfamiliar city and opened her own business, Twist Gymnastics, at the age of 56. She credits her seemingly endless well of courage to the one constant in her life: gymnastics.

"I can without a doubt say that the courage and the perseverance and all the things that I got from doing this sport have prepared me for so many things that happen in life," Cain says. "You have to make scary decisions, like opening this business. I couldn't have done this without all those years of other scary things."

By today's standards, Cain was older than the average gymnast when she started the sport — she was 9. It all started with some tumbling in elementary school gym class. The teacher eventually told her parents there was nothing more she could teach her, and encouraged them to sign her up for lessons. And so began a decades-long obsession that made her one of the top U.S. gymnasts in the early 1970s.

A broken ankle sidelined Cain before the 1976 Olympics, ending her career as a competitive gymnast. But by the '80s she was living in New York, trying to hack it as a professional actor and coaching gymnastics on the side. A believer that things have a way of turning out the way they're supposed to, she ran into someone on the bus one day that she'd known through the sport years earlier. He worked in the film industry doing stunt work — a career she hadn't considered but that made perfect sense for an actor with an inherent ability to perform above-average physical feats. She doubled for actors like Angelina Jolie and Kim Cattrall, and her last film was "The Flamingo Rising" in 2001.

Work, marriage, children and a divorce took her all over the country, and by the time all her kids were out of the house, she had a reckoning while working a nine-to-five job in Florida.

"As a mom, you get so used to making decisions based on everyone else's needs that it really takes a surprising amount of time to just learn how to focus back on what are my strengths, what do I love, who am I, where do I want to go next?"
Despite never having lived in Virginia, Cain says Richmond was an easy choice as the home base for her business. The demographics were right, her sister lived nearby and after surviving winters up North for so long, she was thrilled about the warmer weather.

In 2010, Twist Gymnastics made its debut. With no business management experience, Cain had a steep learning curve as an entrepreneur and more than one person told her she was crazy for attempting something so risky. But located in an old Hollywood Video store — the interior of which was painted purple, her favorite color, a sign she took as promising — the gym has brought her career full circle. She gets a kick out of teaching gymnastics in a space where movies she performed in once lined the shelves, and a former student's school project displaying her stuntwoman career hangs next to the photos of current athletes at the gym.

Cain notes that her own gymnastics career is behind her — these days her sport of choice is pickle ball — and she's not interested in trying to live out her glory days through the success of her athletes. "It didn't feel like I was giving anything up. For some coaches, they're after the Olympian that they weren't, or something like that. For me, I did my thing. This is their thing," Cain says. "I love gymnastics, I love what gymnastics does for girls, and I love being a part of that process."

At Twist, Cain and her team of coaches take the sport seriously and expect the same from the young athletes. Not everybody gets a trophy, and strips of tape featuring handwritten personal goals cover a post near the balance beams. But Cain makes it clear that the girls have control over the intensity of their training, and she's not interested in pressuring them beyond their limits.

Her next challenge? Hosting her first competition. More than 300 girls from around the commonwealth will compete at the RVA Invitational on Sunday, April 14.

"This will be an opportunity for the kids of Richmond to see real gymnastics," she says, showing off the winners' banners designed for the event.

Spectator tickets cost $10 for adults and $5 for kids, available at Twist before the meet or at the door on the day of the event.