The new owners of Chop Suey Books talk about their plans for the future. 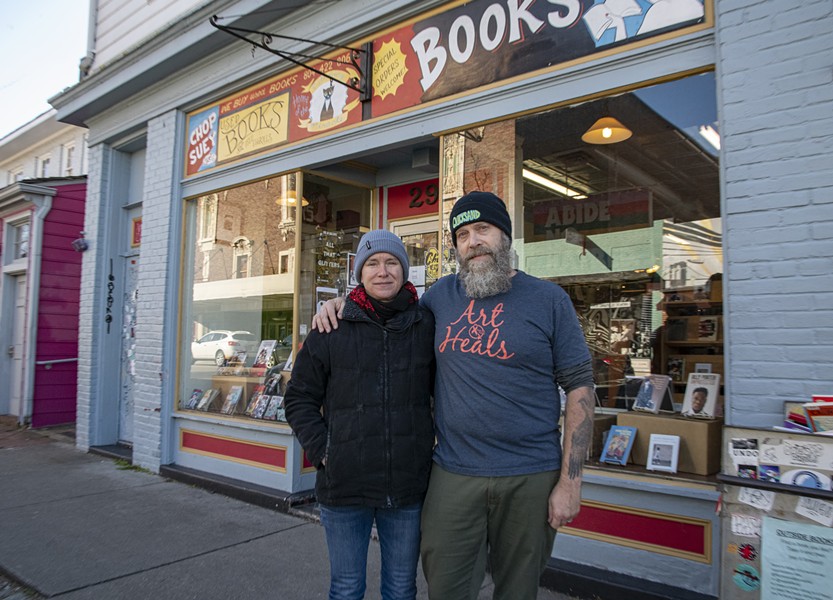 Scott Elmquist The new owners of Chop Suey Books in Carytown, Chris and Berkley McDaniel, are hoping to keep it's indie charm.

On a busy Saturday morning, Chris McDaniel and her husband Berkley chat with customers as they stream into Chop Suey Books, perhaps Richmond’s most iconic independent book store.

The McDaniels have had their hands full after buying the store in October from Ward Tefft, who opened the outlet in 2002. It has become such a Richmond landmark that The New York Times published a laudatory story about it in 2019 that was headlined “A Southern Bookstore Serving Up a Little Bit of Everything.” Tefft started the company in 2002 and six years later moved into its current location at 2913 W. Cary St., right across from the historic Byrd Theatre.

Berkley says he got a “very long email from out of the blue” from Tefft early last year asking if he and his wife wanted to take over. "I did. We love what he created,” says Chris, who also works in the information technology industry.

Regarding why he wanted to sell the business, Tefft tells Style Weekly that he wanted to spend time with his 4 year old as well as working more on his publishing company that helps local authors. But more on that later.

The McDaniels have been trying to keep the store’s indie charm while adding to it. At first, they put in a new inventory and a point-of-sale machine to make selling more efficient, says Berkley, who is a retired wireless network engineer.

It’s been a busy three months as the changeover occurred and the new owners collaborated with Hardywood brewery for a Brew-Ho-Ho that offered customers a chance to hear popular local authors read their work over drafts of craft beer. Then came Christmas and dealing with Omicron, the new and highly contagious variant of SARS-CoV-2, the virus that causes COVID-19. The new owners require employees and customers to wear facemasks, which they can also provide if necessary. Testing kits are at the ready for employees. So far, they have had no incidents, they say.

The owners plan on keeping Chop Suey’s regular trade in used books but also want to add new ones, including more poetry along with graphic art books and a mix of local authors and national ones. Berkley says he spends long hours reviewing what national publishers are marketing along with listening for upcoming local and regional works. He wants to put more emphasis on his seven staff members whom he regards as essential to learning what customers really want. “My focus is on employees; to make it easier for them to talk to customers,” says Berkley.

Another key initiative is making sure that Chop Suey is a primary local advocate for Richmond’s literary set. The McDaniels want to expand the discussion events that involve local authors. They have developed ties with local authors’ groups, such as Richmond Young Writers, and are looking to forge links with another group, James River Writers.

Independent bookstores have long been threatened by huge online sellers such as Amazon and big-box retailers like Barnes & Noble, which has a powerful marketing arm. Providing local ties and a place to browse in comfort can mean the difference between success or failure. Richmond still has a handful of independent stores, including Fountain Bookstore and Small Friends.

But the pandemic hasn’t helped. The New York Times wrote in October: “According to the American Booksellers Association, which developed the campaign [to support independent] . . . one independent bookstore has closed each week since the pandemic began. Many of those still standing are staring down the crucial holiday season and seeing a toxic mix of higher expenses, lower sales and enormous uncertainty.”

Tefft no longer has ties to the store but is busy with books in another way. While still owner, he had started Chop Suey Books, a publishing arm which has released six titles. He's changed its name to NoHow Books and is now working on a coffee table book by local mural artist Hamilton Glass, who was involved with the Mending Walls RVA public art project in 2020.

Mending Walls, which involved Glass and several other artists, was sparked by the murder of George Floyd by a policeman in 2020 in Minneapolis and the Black Lives Matter movement. As Richmond debated what to do with several prominent statues of Confederate generals and others, the group put up murals in the city promoting racial healing. The book is due out this spring.

Meanwhile, the McDaniels are getting up to speed on solidifying and expanding the Chop Suey name. “It’s going as well as can be expected,” says Chris.

Trying to keep the nice, homegrown buzz the store has had for some years, Won Ton the cat was sold along with the business.

“He’s part of the contract. We had to go to a veterinarian and sign papers,” says Chris. She notes that Won Ton is elderly at 15 years. “We want him to have a long and happy life."