Union Seminary swaps its pews and aisles, and adds a modernist touch. 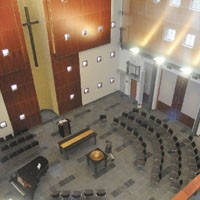 An unlikely, ambitious and ultimately thrilling architectural swap has just occurred in Ginter Park at Union Theological Seminary and the Presbyterian School of Christian Education. From the surrounding, tree-lined streets — Brook, Chamberlayne, Westwood and Melrose — apparently little has changed since 1896 when the campus was established here: The unremarkable landscaping and the orangey-red brick Tudor Revival buildings exude an air of dour continuity. But don't be fooled by such Protestant reserve. This venerable Presbyterian institution has been busy of late redefining and transforming some of its historic buildings intelligently for a second century of service.
So what got swapped? Two major buildings: The library and a chapel.

Former Schauffler Hall, at the eastern end of the seminary's distinctive grassy quadrangle, once housed a sanctuary designed by Baskervill & Son architects in 1922. It was marked by a relatively plain nave and walls punctuated with restrained, stained-glass windows.

Desanctified and stripped of altar and pews, in 1996 this chapel was reworked to accommodate multiple levels of stacks of the new Morton Smith Library (The GlavAc Firm, architect — now GlavAc & Holmes Associates). The building's size was doubled with a bold addition housing a large reading room, offices, study carrels and a soaring atrium and lobby with a skylight in the ceiling evocative of the Victorian-era Oxford Museum of Natural History at the university of that name in England, designed by architects Thomas Deane and Benjamin Woodward.

The architecture of the new library embraces the campus' distinctive Tudor tone in a distinctive, postmodernist way. And with such “archeological” elements such as an exterior wall of Schauffler Hall becoming an interior wall of the lobby, the library quickly became an intriguing architectural landmark.
Books and manuscripts were transferred from the former Spence Library at the opposite end of the quadrangle.

Spence, one of the seminary's original structures, was built in 1896 (Charles R. Read Jr., architect) and expanded in the 1940s and 1970s. This building is distinctive architecturally with its original reading room containing skylights and a balcony supported by cast-iron columns. By contrast, an oak-paneled lobby in the Moderne style and another reading room were added in the 1940s.

Twelve years after the chapel became a library, Spence underwent a mind-boggling interior transformation and was rechristened this fall as the Allen and Jeannette Early Center for Christian Education and Worship. It now has meeting spaces, classrooms, faculty offices and, most dramatically, a handsome new worship space, the Julian Lake and Robert Lake Chapel.

While the entire renovation by GlavAc & Holmes is spectacular in concept and execution, the chapel is — and appropriately so — the architectural highlight. And it was created within the most unlikely of spaces, the brick-walled shell of the bland structure that once housed eight levels of library stacks. All the thick concrete floors were removed, vertical steel beams installed to support the walls and the two uppermost stack levels eliminated to create an exuberantly open space — a cube measuring 40 feet to a side.

The design is also unblinkingly modernist and Protestant. The frozen chosen, as Presbyterians are sometimes jokingly called, eschew frills and will find none here. Instead, the architect has created a highly contemplative space by combining perfect proportion, ample daylight, controlled artificial light and exquisite architectural detailing.
The focus of the chapel is its far western wall. This is covered by a grid of cherry-wood panels perforated with a smaller grid of deep-set, 1-foot-square windows of clear glass. These jewel-like openings are reminiscent of those Le Corbusier incorporated more randomly in his Chapel of Notre-Dame-du-Haut at Ronchamp, France (1950-54).

Slicing up the center of this wall, from floor to ceiling, is a thin apse that contains an elongated cross. This is the only icon in the room.
The chapel is floored in large, rectangular slabs of slate in two tones of gray.

On both the flanking northern and southern walls, just below the original casement windows that once illuminated the library stacks, are two dramatically high double doors. These, too, are cherry veneer and can be opened onto adjacent classroom spaces when attendance demands.

But if God is in the details, look high above the doors. Two huge mesh screens woven of thin brass threads and hanging from steel cables, screen daylight only slightly from the casement windows. This metallic fabric, imported from Germany, all but disappears during bright daylight. At night, with no light from the windows, its surfaces shimmer when illuminated by carefully placed lights.

On the chapel's rear wall are two high balconies that run the length of the wall and open onto upper levels of the main building. Despite the modernist design of these platforms and their metal railings, they give the room a fascinating medieval feel.

Finally, the ceiling is not flat but slightly undulates for acoustical purposes and to aesthetically soften the cube it shelters: Its curve is barely discernable from the floor below.
And so an unlikely architectural swap has been completed: A former chapel is now a library, and the old library is now a chapel. Intelligent doesn't begin to describe the Glave & Holmes adaptive reuse of the Early Center for Christian Education and Worship. The firm and its client have achieved a remarkable building transformation with a chapel that takes its place as one of our city's sublime interior spaces. S