Truth and Consequences at Reynolds 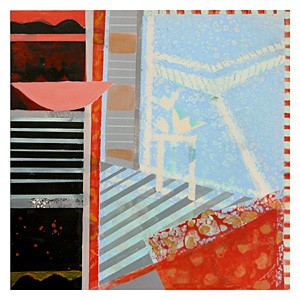 There can be universality in a piece of art. It can extend with meaning far beyond the point of conception and offer something new to each viewer who comes upon it. This constantly evolving truth begins with the familiar and allows the audience to answer its own question. In two shows at Reynolds Gallery, Carlton Newton and Sally Bowring offer up new truths.

In Carlton Newton's show, “New Work,” the associate professor of sculpture at Virginia Commonwealth University has created a series of drawings and sculptures influenced by science and the natural world. His depictions of Japanese sumi ink on paper are minimal in form and pattern yet vibrate a life outside of themselves. He refers to science as an influence and it shows in the repeated vision of clusters. In a way it is not the physical representation that is so true of nature but more the microscopic reality of sameness inherent in formed life.

Each print is made up of a multitude of single lines replicated repeatedly until form appears. These images are similar to his wire sculptures in that they mimic the shadows cast by the three-dimensional works. His wire sculptures are displayed on the wall, which enhances the black shadows produced by the thin wire. In all, these pseudo-organisms stand outside of any true definition. Newton says, “the more [the drawings and sculptures] are about one thing, the less they can be about many things.”

In Sally Bowring's aptly named show, “Patina,” the longtime Richmond artist also works in the realm of the ethereal where specific representation is not the goal. Her work is autobiographical in many ways but in her process she is able to blur these truths to allow the final work to be about everything and nothing in particular at the same time. Through color and composition she delivers notions shared in life, some so far gone that only the slightest hint remains. Beneath layers of acrylic she veils the true meaning of her own discoveries and moves onward. Bowring uses color and rhythm in combinations as shifting as the seasons she represents, subtle and fading but always still the same. Her grid of time exists in a two dimensional setting, evoking a feeling of an embryonic existence which is present and frozen, but slowly evolving as the perspective of time shifts.

Together, these two shows offer an openness and challenge to true representation. By working through the familiar they are able to build off a realistic foundation and discover a meaning through their artistic processes.