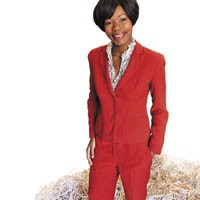 Passing your most sensitive documents off to a reporter, even if they'll be shredded into corporate confetti, may sound like a questionable business strategy. The irony isn't lost on Nicole Bell, a reporter at NBC 12 and co-owner of Gone 4 Good Shred.

Though she won't share details, the document destruction business she started with her boyfriend Todd Van Patten in 2006 doesn't seem to be hurting. The small company counts medical facilities, accounting agencies, law firms, plastic surgeons, home health centers and nonprofits as its clients and competes with larger operations providing similar services in the Richmond area.

"This is our baby -- we thought of the name, logo and everything," Bell says. "We're working hard. It shows in the type of clients that we have."

Bell exudes the kind of energy and enthusiasm you'd expect from someone who works two full-time jobs. But she's careful to keep her occupations separate and acknowledges an attribute common to both positions: trust.

Despite the initial success of her business, which she says is the only minority-owned shredding company in the state, Bell says she doesn't see herself putting the microphone down anytime soon.

"I went to school for journalism and reporting and I do enjoy it," Bell says after another day of multiple daily deadlines in the news industry. "I do care about the concerns of others. People want to be heard, they want to be listened to."