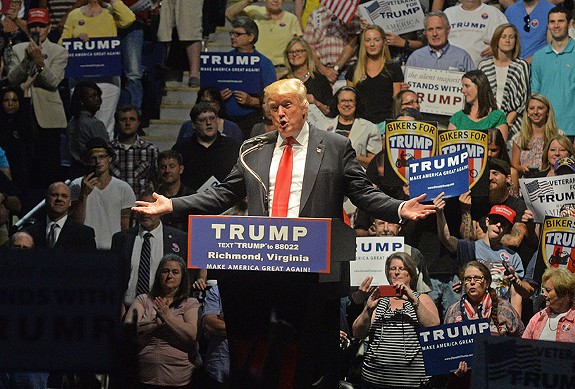 Donald J. Trump brought his presidential campaign to the Richmond Coliseum on Friday.

He gave a 50-minute speech filled with high-decibel braggadocio, promises of making America a winner again, along with denunciations of Hillary Clinton as crooked and U.S. Sen. and Trump critic Elizabeth Warren as “Pocahontas,” mocking her claim to Native American ancestry.

Security was extremely tight given incidents the week before at a Trump rally in San Jose, California. Richmond Police Chief Alfred Durham had vowed to keep order. Despite several scuffles, there was only one arrest.

Trump, who was 45 minutes late for the rally before the nearly 12,000-seat Coliseum that appeared about one third filled, hit again and again how he would return America to greatness.

He vowed to get smarter on trade deals, build a wall with Mexico, shore up gun rights, end Obamacare and get rid of the federal Common Core education program.

He noted Virginia’s important role as a swing state and how he would be coming back many times before the presidential election. After he clinched the delegates he needs for the Republican nomination, he said that groups such as evangelicals are lining up behind him.

He said he was told by an important Hollywood mogul “that every liberal in L.A. is voting for you. This is from one of the biggest guys there.”

“Our country needs a winner because we have a bunch of clowns running our country,” Trump said. China runs a $505 billion advantage in trade and breaks rules, he said. Oddly, he added, “I love China.”

He saved most of his anger for Mexico.

“Mexico is destroying us in trade, at the border,” he said. At that, the overwhelmingly white audience chanted: “Build the wall! Build the wall!”

Trump said the border wall will be “very tall” and “very strong.” It will be “very beautiful” and “maybe someday they will call it the Trump wall.”

Without missing a beat, he cued the audience. “We’re going to let lots of people come into the country but they will come in legally,” he said, shouting, “Who is going to pay for this wall?”

“Mexico. Mexico,” the crowd roared back.

Referring to candidate Bernie Sanders, whom he referred to as “Crazy Bernie,” Trump said, “Bernie’s right about one thing — trade.”

Trump’s speech was preceded by talks from some notable conservative Virginia politicians.

State Sen. Dick Black from Northern Virginia said that if Clinton is elected, she will stack the Supreme Court with “Marxists like you’ve never seen.”

Black, who recently returned from private talks with Syrian dictator Bashar al-Assad, claimed that Clinton accepted money for her foundation “from Arabian tyrants who tell us where to send troops and how many legs will be blown off.”

Another speaker was Corey A. Stewart, chairman of the Prince Williams County Board of Supervisors, who is running for governor as a Republican in 2017. He attacked Clinton for alleged corruption, leading a “Lock Her Up” chant.

In general, the rally was peaceful except for some incidents outside. State troopers, city police and the U.S. Secret Service had made their numbers obvious.