Trouble on the Block 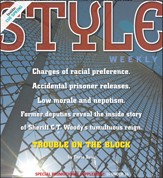 During his heated and successful campaign for sheriff, Richmond's most decorated homicide detective pledged to clean up the troubled city jail.

C.T. Woody Jr. promised that if elected he'd bring greater accountability to the public and an improved, more professional jail to be staffed with deputies trained to Richmond Police Department standards.

After 15 months in office, the man who calls himself the "Urban Legend" has proven more myth than reality, according to a growing roll call of former sheriff's office employees.

Behind the sunny headlines about the department seizing gun caches and the soul-bearing revelations of deputies fired for involvement in drug rings inside the jail, Woody's assertions of openness are much murkier.

And despite the positive affirmations, evidence of jail mismanagement abound:

Less than a year after Woody hired the Rev. Joe Ellison Jr. as head chaplain, Ellison was charged with sexual misconduct with a jail volunteer. There have been inadvertent releases of inmates, drug and contraband trafficking by deputies and at least one assault by a deputy on an inmate.

Since taking over as sheriff, Woody has overseen a jail littered with administrative incompetence, say a number of former deputies and departed command staff members. They describe an environment of low morale among deputies, lowered professional standards and safety practices, promotion and demotion of deputies based on race, and a purging of the department's veteran command staff.

Meanwhile, Woody has rebuilt the jail staff with cronies and relatives who have little or no corrections experience.

Since January, Style has conducted interviews with nearly a dozen former Richmond City Sheriff's Office personnel, researched numerous state and sheriff's office documents, and submitted multiple Freedom of Information Act (FOIA) requests to delve into allegations of mismanagement in the Woody administration. Many of the deputies interviewed spoke on the condition that they not be named, saying they feared jeopardizing their current jobs in law enforcement outside the Richmond sheriff's office.

Capt. Gary Sink was a 12-year veteran of the Richmond City Sheriff's Office. So he expected the usual pomp and circumstance when he reported to City Hall for the department's swearing-in ceremony Dec. 5, 2005.

Instead, he says he got fear and intimidation.

"I was at the courthouse with about 60 to 80 of my peers — my subordinates," he says — "and a guy walks up to me and tells me that 'I was told by Sheriff Woody to tell you that he's not going to keep you on.'"

Sink was taken aback, he recalls. "First of all, I said who the hell are you, and then I said I need a reason why."

Sink appealed directly to the just-elected Woody, asking him to step away from a small group for a private conversation. Woody declined to explain the decision for Sink's dismissal, Sink says, and he describes being reduced to begging for his job. After he pleaded on his "soapbox," Sink says, Woody eventually reversed his decision and allowed him to stay.

But Sink never again felt quite comfortable in his brown-and-tan uniform, he says.

"I was thinking that, well, if he was to the point where he was going to fire me, I figured I was going to lose my rank," Sink says. "There was rumors all over the [jail] about who was going to take my position. I was a stressed-out fellow -- I didn't know where I was headed."

Despite his feelings, Sink began receiving frequent public accolades from Woody for job performance. He says he got over the pressure, but never the bad taste. So he decided to leave the department nine months ago to join the Colonial Heights Police Department. He was not fired, never disciplined and never had his rank reduced, but he says the hostile work environment created by Woody was unbearable.

Others describe a similar environment. "There was this perpetually overwhelming atmosphere that the boat was being rocked," says one former deputy, who left last summer for a state law-enforcement job. "It's hard to put into words. You worried you [were] just going to be ousted at any moment."

Indeed, the hostility, according to many of those interviewed, crossed the line into the kind of hostility least expected in a department that's as good an example of a melting pot as any in Richmond.

The former deputy, who is white, bemoans what she calls a new tone of racism that, she and other former deputies say, fell like a pall over the promotion and demotion process after Woody took over.

"There just seemed to be an overwhelming atmosphere of us versus them," she says. "It was particularly disturbing to me because working under Michelle I never felt that … that 'great divide of race.' But when the new administration came in,  some of the people who got promoted just didn't make any sense."

"There's definitely issues with the Richmond City Jail," he says. "There's a lot of discrimination issues if you ask me. It seems to me if you weren't black, you weren't moving up anywhere."

To hear some tell it, you were more likely moving out — especially if you held a leadership position under Mitchell.

Two former lieutenants, both white, were demoted while on approved absence from work under the federally mandated Family and Medical Leave Act. Woody demoted Andrew Brandel and James Womack to deputy rank and had black officers installed in their vacant ranking posts.

Also along with the reduction in rank came the loss of knowledgeable career jailers, many of whom have left the sheriff's office.

Former Capt. Brian Michaels, who served as director of professional standards, was fired last year while on vacation. He was accused of deleting files from a sheriff's office computer before his holiday, though it was later shown that the files were not deleted, but rather backed up to an external hard drive. Despite this, sources say, Woody sent out an e-mail edict that Michaels was to be arrested if he came onto jail property.

The man who took Michaels' place, according to various people within the jail, actually set up shop in his office before Michaels had been fired — and before the files allegedly had been deleted. Woody also accused Michaels of providing the Virginia Department of Corrections with unflattering information about jail operations, including tips about deputy training deficiencies, during the jail's annual inspection in December.  State corrections officials say they were unaware of any such action by Michaels or the accusations by Woody.

"He promised everybody that you weren't going to get a promotion or transfer because of who you know — it was going to be because you earned it," says one former deputy familiar with Michaels' dismissal, as well as with promotions that occurred when vacancies were created.

Though he has been open about the firings of various white deputies, Woody's promise of transparency has not been borne out in requests by Style for information about hires and fires.

Woody's office provided Style with a list of promotions from January 2006, when he took office, to January 2007. But the office, citing privacy issues, refused a FOIA request for a list of demotions and firings during the same period.

Tara Dunlop, Woody's spokeswoman, says that the jail's ratio of black command staff to white command staff — roughly 60 percent to 30 percent — is representative of the Richmond community at large.

Woody staunchly dismisses any charges of racially based hiring, firing or promotions.

"All of my highest people that are in charge that have been here since I have been here have been white people," Woody says. "I've never had a black undersheriff. I've had two white undersheriffs. There's no racism. I've been fair and I've been open. It will be proven and it is ludicrous to think … the record will speak for itself."

Charges of racism by Woody against white officers have entered the court system. Local attorney Michael Hancock recently submitted a lawsuit by two white former deputies fired by Woody, attempting to link the cases to show a pattern of racism. Hancock says he also has been approached by other former deputies who were fired or demoted.

One former deputy who has filed suit is Robert Garrett, a cue-ball-coiffed, barrel-chested bulldozer of a man whose Southern drawl reverberates with a neo-military intensity. In September, Garrett and two other deputies, including a supervisor, mistakenly allowed a prisoner to walk free.

Garrett, who takes responsibility for the mistake, says it was a clerical error. The inmate was recaptured not long after the release.

But in the wake of the release, Garrett was fired, while the other deputies involved — both black — were not. Garrett was denigrated in the press by his former boss, who called him incompetent and a disgrace. A second white deputy, Eric Aycock, was fired in January after a similar accidental release. Woody accused the two of being in cahoots to embarrass the sheriff's office.

"I have 10 good-conduct awards," an incredulous Garrett told Style in January after hearing of Woody's personal attack. "I'm a decorated, competent, accomplished officer. And for C.T. Woody to say I have no integrity for my job … is just absurd."

Garrett's lawsuit alleges four other instances of accidental prisoner releases, all by black deputies, none of whom were fired: