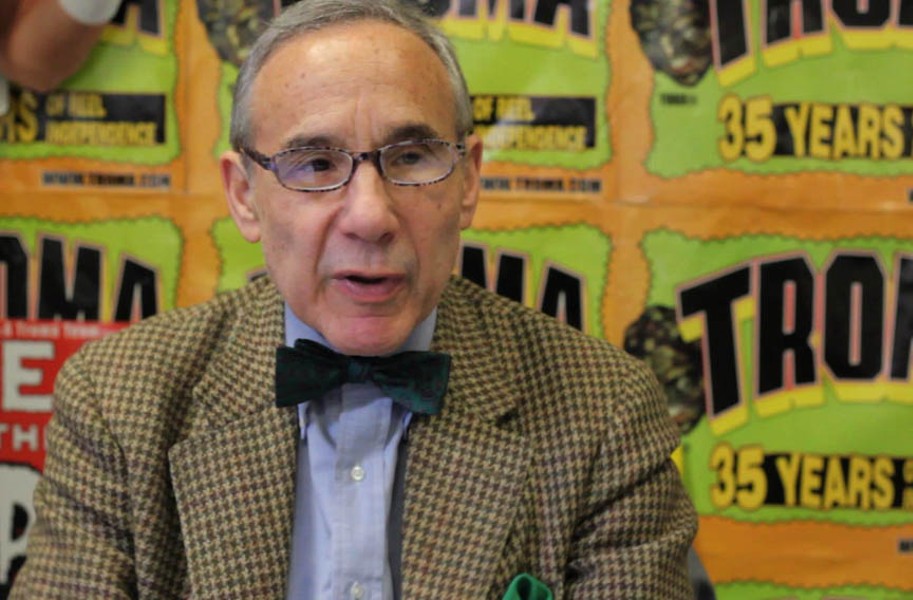 Troma head Lloyd Kaufman in a scene from “VHS Massacre: Cult Films and the Decline of Physical Media.”

Prepare yourselves: There will be blood — a whole lot of it.

Showers of gore are a given now that Gallery5’s Troma film series is scheduled to screen eight films from the infamous Troma Entertainment, whose tag line is “40 years of disrupting media.”

The company has been bringing innovations to the cult, Z-movie genre with tongue-in-cheek horror, graphic violence and erotica for years — “A Nymphoid Barbarian in Dinosaur Hell,” “Poultrygeist: Night of the Chicken Dead” and “Surf Nazis Must Die!” among them. The best known might be the “Return to Nuke ’Em High” franchise.

Gallery5 staff member Ben May knew local filmmaker Drew Bolduc — whose postmodern horror flick “The Taint” is on Troma — and got his assistance in greasing the wheels for Troma to send screening suggestions. Rather than pare the list, Crider and May decided on an eight-week smorgasbord of films chosen specifically for Richmond.

“I have seen a few Troma films and appreciate the campy, modern themes,” May says. His favorite is “Cannibal! the Musical,” which was the first feature by Matt Stone and Trey Parker of “South Park” fame.

“It was a fun film to watch when I was 17,” May says. “It brought me great comfort knowing that a couple of guys could make something so ridiculous and entertaining with nothing but ideas. Troma has been enabling guys like them for 40 years.”

“This series really isn’t for the light at heart,” Crider says. “While the imagery is usually over-the-top and downright ridiculous, it does contain overt sexuality, nudity, and intentionally sadistic, gory and blatant graphic violence.” So all screenings are for an 18-and-older audience.

Elizabeth D’Ambrosio, Troma’s head of sales and acquisitions, breaks down the benchmarks that define the genre, which include using cost-effective techniques to turn out relevant socio-political critique masquerading as hilarious radical film, as any good B-movie might.

“At the same time,” D’Ambrosio says, “they’re satirizing ‘exploitation cinema’ clichés such as nudity, ultra-violence and stereotypes as a means to create powerful messages with a dynamic cinematic language.”

As added inducement to attract Troma neophytes to Gallery5, tickets will be offered at $3 for individual shows or $15 for a season pass, in the form of a Toxic Avenger koozie. As if any more incentive were needed, Halloween night is a double feature.

The real benefit to grabbing a season pass is the assurance that you’ll have a seat. Because Gallery5 owns only 80 chairs, screenings could fill up quickly with the curious and film-savvy. The koozie guarantees a seat. “Plus you get an awesome koozie,” Crider jokes.

The plan is to test the waters to see if Richmond responds to such an obscure monthly movie night, in hopes that the series takes off.

Gallery5 and Troma Entertainment have high hopes that this becomes a launch pad for future screenings of Troma’s over-the-top films that and are a far cry from the re-makes and superheroes dominating multiplex cinema screens.

Fans of film history also may learn a thing or two.

“To curate a series of Troma titles is truly the best way to explain the early origins of crossover genres in [Troma founder] Lloyd Kaufman’s films and how they developed,” D’Ambrosio says.

Director, actor and producer Kaufman has long been known for giving a platform to people of all skillsets and experience to try their hand at acting, filmmaking and the business end of the movie industry.

Crider may be mum about whether “Teenage Cat Girls in Heat” will be shown, but he does have some sense of his targeted audience.

“Really, this series will hit home with the VHS nerd population of the city and anyone into the exact opposite of mainstream film,” he says. “Think campy, gory and socially pungent.” S

Troma Night Series runs Aug. 22 through Nov. 28, at 8:30, at Gallery5, 200 W. Marshall Street. Information at gallery5arts.org. The first screening will be “VHS Massacre.”