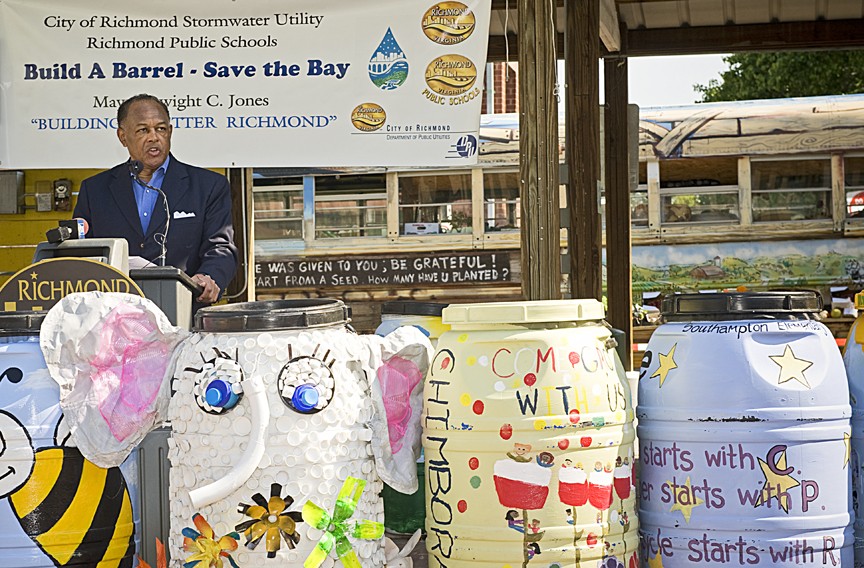 These are five of the 55 initiatives in the city's new RVAgreen plan announced by Mayor Dwight C. Jones at the 17th Street Farmers' Market on Saturday.

Jones describes the city he thinks Richmond can become — one where more people commute on bikes, rain barrels populate backyards and businesses cut their energy use.

It won't be easy, he acknowledges. "We as Americans are spoiled because we've had so many conveniences for so long," Jones says. "So to change that kind of behavior is going to be difficult."

The RVAgreen plan is the product of more than a year of public hearings and meetings by the city's Sustainability Advisory Committee. It doesn't include any revolutionary initiatives, says committee member Trip Pollard, a senior attorney at the Southern Environmental Law Center. The city isn't banning plastic bags or launching mandatory composting, for instance. And that's intentional. "The city can really show the way," Pollard says, "but … wouldn't necessarily be able to make people do things."

How much will it all cost? The plan includes only rough estimates. About two-thirds of the initiatives would cost less than $100,000, but a few, such as the trolleys, could carry multimillion-dollar price tags.

Pollard is optimistic that the plan will spark real change. "If there's the follow-through — the city's gotta put up some money [for] this, and hopefully the counties will follow suit — I think these are really reasonable and achievable goals," Pollard says.

City Council has its own green group — the Green City Commission, which was established in October 2010 to advise council and inform Richmond's master plan. The mayor's plan is broad enough that the commission can help figure out how to execute it, says member Amber Foster, partner in RVA Green Management Services: "There are so many ways we could go with this."