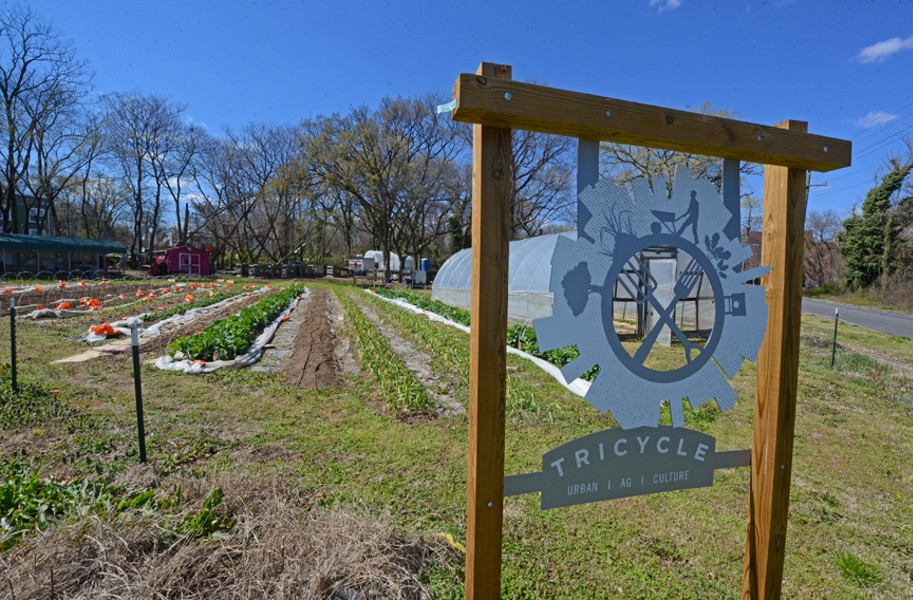 Tricycle Urban Agriculture's Corner Farm is no mirage in the desert. What the program represents is a public and private partnership that's been bringing fresh fruits and vegetables to food deserts around Richmond since 2013.

In a city known for its award-winning restaurants, chefs and specialty grocers, Richmond once held the unfortunate distinction of being the worst food desert for a city its size in the country, according to a 2012 report by the Community Development Financial Institutions Fund.

Tricycle Urban Agriculture delivers both its own fruits and veggies and produce bought from local farmers to small convenience stores around town. According to mission manager Isabel Eljaiek, the program began with two pilot stores in the East End — the Valero in Fulton and Clay Street Market in Church Hill — and now has 25 stores participating.

"We invest a lot in the relationships with the store owners, so we often get invited to bring the corner farm program into their family of stores," Eljaiek says. Such was the case when Clay Street Market's manager Shawn Algaheim's family opened two additional stores in North Side.

Small business owners can get smaller amounts of food than from traditional suppliers.

"That's what's good about it," Algaheim says. "They give us enough to sell, but not too much to waste. For us, it helps that now we have healthy items in the store for customers."

When Tricycle takes on a new store for the program, it offers a three-month buy-back period whereby owners can return anything that doesn't sell. Eljaiek says it helps those new to the corner-farm concept figure out what sells in their neighborhoods.

In-store tastings allow customers to learn how fresh food can be prepared in healthy ways, with recipe cards handed out afterward — more than 2,000 so far.

The next step is teaching people how to eat healthy all week, and that includes cooking classes, meal planning and food budgeting with limited money. Much of the outreach is done in public housing neighborhoods with customers who use Supplemental Nutrition Assistance Program benefits, and kitchen bundles containing knives, cutting boards and plates are distributed to increase the likelihood of healthy home cooking.

Kits with everything required to create meals contain identical ingredients to what Tricycle sells to places like Ellwood Thompson's Local Market, the Roosevelt and the Broken Tulip.

"It's the same food," Eljaiek says. "It's all about the ability to access good ingredients."

Ross revels in bringing people together to harvest, cook and eat.

"Food can make or break a community, that's why this work is so important," she says. "Everyone should have access to good food."

Need to pick up some fresh local produce of your own? Tricycle's stand at Virginia Commonwealth University's Massey Cancer Center returns at 401 College St. every Thursday from 10 a.m. to 1 p.m. S