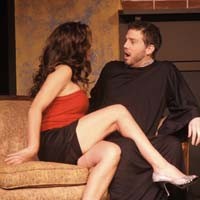 Most plays this time of year try to warm a few hearts or reinforce an uplifting message or two. For a change of pace, you might consider Sycamore Rouge's "Inspecting Carol," a satisfying slice of seasonal silliness focused solely on generating laughter. Though the pace lags early on and a couple of cast members overplay their roles, the second act pays off with a cavalcade of belly-laugh-worthy scenes and a conclusion that doesn't betray the evening's general absurdity by trying to impart a moral of any kind.

The play recounts the rehearsal and eventual staging of a small Midwestern theater company's production of "A Christmas Carol." Beset by financial woes and an overbearing prima donna (Glenn Leftwich) playing Scrooge, the company's artistic director (Carolyn Hayes) becomes convinced that an awful newbie actor (Asher Nicholson) is actually an inspector from the National Endowment of the Arts, on-site to vet the company for its grant renewal. Confusion leads to desperation, which culminates in a hilariously inept reworking of the Dickens classic.

It takes a good actor to play a bad actor convincingly and the gangly Nicholson does a great job. As the beleaguered director, Hayes projects just the right amount of haughty artiness tempered by an opportunistic sexiness. Leftwich is in fine form, though his accent makes Scrooge sound like a gruff Latino instead of a cranky Londoner.

The real find here is Elise Boyd playing the production's stage manager, MJ. She's a natural on stage and grows increasingly amusing as her character's frustration mounts. Maxx Casanova as the company's accountant and Robert White as Bob Cratchit are both a bit manic for a play already scattered enough. Philip Milone's set is utilitarian and R. Jon Shelly's lighting design accentuates some scenes nicely. Director Ronal Stepney could tighten things up in the first act but wisely milks some priceless moments later on, delivering a "Carol" worth commendation.