The Richmond Symphony celebrates a half-century of youth sound. 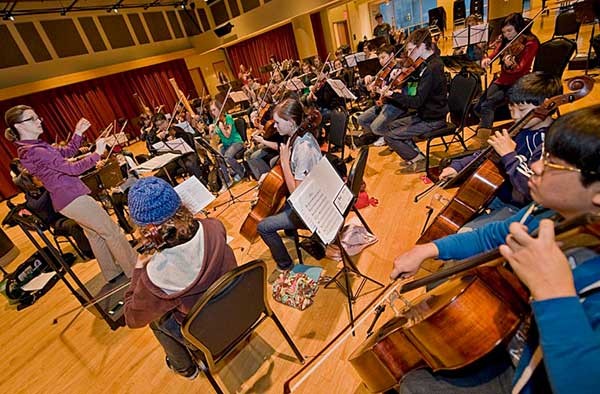 The minutes before an orchestra rehearsal are filled with a casual, muted cacophony. Violinists pluck strings like a guitar while chatting about their weekend. A trumpet player quietly runs up and down half a scale. The timpanist takes her mallets from a carrying case that clicks and jangles with other percussion tools.

When the conductor steps to the podium, expectant silence settles among the music stands.

Every Tuesday, this scene happens nearly simultaneously in four different rooms around the city, where the 260 musicians in the youth orchestras of the Richmond Symphony Orchestra begin another rehearsal. This year the program, started four years after the symphony was founded, marks its 50th anniversary.

Through the years, the program has seen various configurations. There are four ensembles: the entry-level string group Sinfonietta, for which no audition is required; Camerata Strings; Youth Concert Orchestra, which includes winds, brass and percussion; and the Richmond Youth Symphony Orchestra, a pre-professional ensemble. The groups give two or three concerts a year at CenterStage and frequently perform at schools, museums and elsewhere. (My daughter participated in the program between 2008 and 2011.)

For several years in the 1970s, for example, it included a youth chorus and, at another point, a wind ensemble. Recently, local composer D.J. Sparr wrote a piece for two of the orchestras to perform together. He also led a class for students who'd expressed an interest in composition, Freeman says.

All children in the program receive regular coaching from symphony orchestra musicians. The top-tier orchestra plays alongside the professional orchestra for at least one concert each year, and the other ensembles receive the same side-by-side opportunity on occasion as well.

Nationally, most youth orchestras are independent entities which may or may not collaborate with local professionals. And among youth orchestras that are affiliated with adult groups, Freeman says, it's "not so normal to have the younger orchestras do side-by-side concerts."

Violinist Libbie Hamner, 15, has been in the program for six years. She says she appreciates the chance to work with the pros: "It's sometimes intimidating, but it's really helpful."

"On a basic level it makes simple sense" for a professional orchestra to have a youth program, says Jessica Balboni, director of the orchestra leadership academy at the League of American Orchestras, the primary industry organization. The knowledge and the passion are already in-house, and the young people in the program are, after all, future musicians, donors, board members and audience members.

So who are these young people? Some of them plan to be musicians and many more don't. Some take private lessons and some learn their instrument through school programs. Some are home-schooled, some go to private schools and others go to public schools — although "a ridiculously small percentage" is from Richmond city schools, says Aimée Halbruner, director of education and community engagement for the symphony orchestra.

Freeman and Halbruner note that the disparity isn't related to the quality of music education in the city system. "We realized that the students just couldn't see themselves in this program," Halbruner says. The symphony is working to change that with a variety of educational programs and outreach to organizations such as the Friends Association for Children, which provides after-school music lessons in Church Hill and Jackson Ward. "It's important," Halbruner says — "It's our job to make sure — that this program reflects the community."

"There's a long way to go" to increase economic and racial diversity in ensembles across the country, Balboni says, but awareness is growing, particularly as cuts to music education in schools "put the pipelines to youth orchestras under major duress."

Charlie Frise, 18, is a senior at Hanover High School who plays trumpet in the youth orchestra as well as in jazz groups, the marching band, at church, and for paying gigs. He doesn't sleep with his trumpet, but he does keep it under his bed. He plans to major in music education next year and says he'd like to form a jazz combo or a brass quintet and perform in elementary schools.

"That's when I got introduced to music," Frise says. Like the Richmond Symphony trumpet players who inspire him, he wants to share the passion. S

All four youth orchestras and several program alumni will perform an anniversary concert at Richmond CenterStage on Jan. 28 at 7 p.m. Tickets are $10-$30. See richmondsymphony.com for details.