Raped in her hotel room after taping a television show, Rosemary Trible plunged into darkness. Now she expects to meet her attacker in heaven. 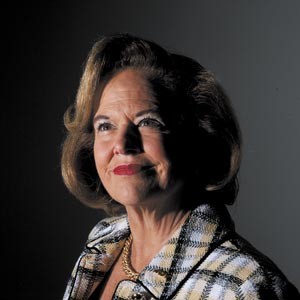 It's difficult to say which is the more shocking — that a former U.S. senator's wife would publicly admit having been raped or that she fully expects to spend eternity in heaven with the man who attacked her.

Rosemary Trible was the well-known host of her own live morning talk show on WTVR-6 and the wife of a commonwealth's attorney with congressional aspirations when she was raped by a stalker in December 1975. Her husband, Paul S. Trible Jr., went on to serve as a Republican senator from Virginia from 1983 to 1989 and now serves as president of Christopher Newport University. Very few people outside a close circle of trusted friends and family knew her secret when Rosemary Trible publicly revealed it in January at a gubernatorial prayer breakfast.

“When you keep it in the dark, it continues to grow, but when you bring it into the light, real healing can take place,” says Trible, who recounts the long road to recovery in her book, “Fear to Freedom: What If You Did Not Have to Be So Afraid?” Since the book's release in February, Trible has appeared on “The 700 Club” and has toured the nation, speaking about the need for victims of sexual violence to bring their own pain into the open.

Trible has been reaching out to other victims of sexual assault for years, speaking to small, private groups at YWCAs, colleges and women's shelters. One in six women is a victim of sexual assault, according to the Rape, Abuse and Incest National Network. Equally disturbing, just 6 percent of rapists ever spend a day in jail.

“I want to help them understand it's not the end for you, you can heal from this and you can put that cycle of fear behind you,” Trible says. “But it's going to be a journey.”

In December 1975, Trible's TV show, “Rosemary's Guestbook,” featured a groundbreaking interview with two rape victims, their faces obscured in shadow. Afterward, Trible's phone rang off the hook with a deluge of calls from grateful female viewers thanking her for making it public. “You think it isn't talked about now,” she says, “but it really wasn't talked about in 1975.”

Unfortunately for her, it wasn't just women who were watching the show that day.

Because she lived in Tappahannock at the time, Trible stayed in a hotel across from the television station on West Broad Street while she taped shows to run during Christmas week. One night, about a week after her interview with the rape victims, Trible returned to her room where she was accosted by a tall, muscular black man who had been hiding behind the window curtain. Holding her at gunpoint, he said, sneering, “OK, miss cute talk show host, what do you do with a gun at your head?”

“I don't think I'll ever forget those words,” Trible says. “It was a night of real horror. I prayed and I pled and I fought. I remember just saying the Lord's Prayer to keep from going into shock.”

Hours later, the rapist again raised his gun to Trible's head, threatening, “I know you who are and I know where you live and I will kill you if you tell.” Then he fled out the window, the same way he'd apparently entered.

Despite their best efforts, Richmond police never located a suspect. “He vanished into the night,” Trible says.

About three months later, Trible quit her talk show. “I loved my job but there was that feeling of absolute fear that he was going to attack you, that he was going to be right around the corner. … He had obviously seen the show and it angered him very much,” Trible says. “You just feel like ‘I'll never be clean again, I'll never really feel that joy I lost.' He not only tore my body, he stole my joy. I had been a very joyful and trusting person and suddenly I had this wall up around me,” flinching at noises and not being able to be touched.

Trible's journey to healing began shortly after her husband's election, after she was invited to an inner-city prayer breakfast in Washington. When a large black man sat beside her, she had a panic attack. He introduced himself — he was an ex-con who'd served time in Alcatraz and found Jesus after a pastor told him that God would forgive him for his crimes, even though they were great. A shaken Trible realized that forgiveness was the key to her own healing. “I went into the ladies' room and I got on my knees and I said, ‘I forgive the man who raped me,'” she says. “I prayed that he would come to know God and that I would spend eternity with the man who raped me.”

Trible knows her prayer was answered.

In 1991, while she was driving in a snowstorm on Interstate 64 en route to speak to a group of rape victims at a retreat arranged by a local college, Trible lost control of her car after being hit from behind and spun across the interstate. She spent the following three days in a comatose state, hovering between life and death. “Somehow I was able to slip from the visible world into that invisible world,” she recalls. Finding herself in a field of waving grain under blue skies, she says she was met by a small “welcoming committee” of deceased friends such as her godson, who'd been killed in a car accident not long before.

“There was a sense of peace there,” she says. “There are no earthly words that can describe the joy of the people I saw,” she says. But then, “I looked behind Leland, my godson, and there was a dark shadow, and out of that shadow stepped a huge African-American man, and my heart got a little anxious and I said, ‘Who are you?' and he said, ‘I am the man who raped you and I wouldn't be here, but you prayed all those years ago that someone would tell me about the forgiveness of Jesus and that I would spend eternity with you.'”

Trible believes her attacker may have died in prison, perhaps finding God's love and forgiveness on his deathbed. “It was the greatest gift of my life,” she says. “Somehow he asked for forgiveness, and I truly believe I will spend eternity with the man who raped me and it brought that cycle of forgiveness full circle.

“It took away the fear of death for me — forever.”