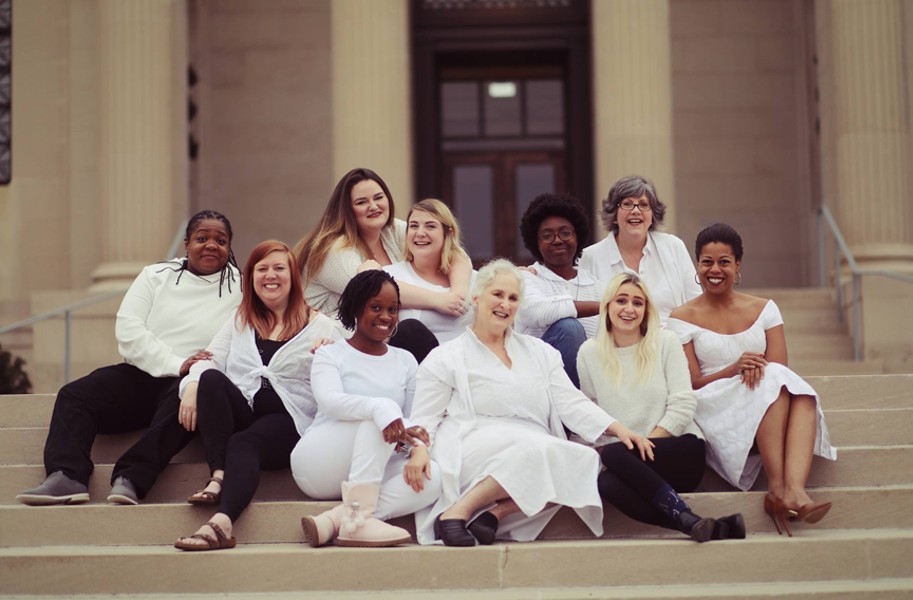 Richmond is no stranger to theater festivals. Every summer there's the Shakespeare Festival at Agecroft Hall, and each new year brings with it a fresh round of stories about faith, hope and belief as a part of the annual Acts of Faith Festival.

This spring, Richmond audiences can also experience the first Women's Theatre Festival, a co-production of 5th Wall Theatre and TheatreLab. Artistic Directors Carol Piersol and Deejay Gray, of 5th Wall and TheatreLab respectively, wanted to highlight and honor the women of Richmond theater, and to underscore and advance women's issues and women's rights, placing stories by and about women at center stage. Organizers plan it as a yearly festival.

These are all one-woman shows, directed by women, with all-female crews. The festival production team is all women as well. It's a true celebration of the talented and hardworking women in every corner of the Richmond theater community.

I was delighted to hear of this festival when it was announced, and having seen a few of the shows during the first week, my delight continues. The stories range from retellings of remarkable public lives to recountings of personal tragedies. Each play explores the trials, traumas and triumphs of one or more women, and in spite of the vast differences between these characters, some common and universal themes emerge. These are plays about women seeking balance between societal expectations and their own personal desires and dreams, women searching for themselves, hoping to define their place in the world and women reaching higher achievement in spite of the odds, which are so often stacked against them.

"Message From a Slave" presented by the Heritage Ensemble Theatre Company and written by its artistic director, Margarette Joyner, tells the story of two generations of women trying to live and love in dire circumstances. Directed by Shanea Taylor and starring Pam Archer-Shaw, the play features evocative storytelling and the distinct voices and experiences of a mother and her daughter. "The story is really about undying love," Joyner says. "In the midst of all this turmoil and all of what they went through, the through-story is undying love and trust in God."

Both Taylor and Archer-Shaw are returning to this material after directing and performing the play for its premiere in February 2017. It is wonderful to have the show onstage again, as this is a story that bears retelling.

TheatreLab's production of "Bad Dates" directed by Melissa Rayford, stars Maggie Bavolak as a single mother who decides it's time to get out of the house and start dating again. Bavolak says the show has a bit of a "Sex and the City" vibe.

"She's obsessed with shoes," Bavolak says of her character, adding that the play, written by Theresa Rebeck, is "very much an early 2000s piece," both in terms of its references and the way characters meet. "It's a time when you can't go window-shopping for your date. There was no Tinder, no Bumble, no OKCupid," she adds.

Another way this show may remind audiences of "Sex and the City" is the element of fashion, with Ruth Hedberg's costumes helping to move the plot along from one bad date to the next. In this way, Bavolak says, the show addresses femininity, self-image and the ways in which we present ourselves to the world. She says the show is relatable because it explores that universal search for love and belonging — and the pitfalls along the way.

"Everybody's got those stories," Bavolak says, "and it's just so great when a woman takes charge and decides she is going to take this dive into the unknown. Her life is together and she's just missing this one element of what we all think we need: a relationship."

"Golda's Balcony" tells the life story of Golda Meir, the fourth prime minister of Israel. Written by William Gibson, this show enjoyed a successful Broadway run in 2003 and the film version is currently making the rounds at film festivals. The Weinstein JCC production, directed by Debra Clinton, relies on set pieces, props and Hedberg's costumes to transition between time and place, with Erin Barclay's lighting and Kelsey Cordrey's sound design establishing tension and wartime chaos. Jacqueline Jones plays Meir with great energy, shifting effectively between bone-chilling gravity and grandmotherly humor. She commands the stage, depicting a smart, outspoken woman with immense power. The tension of the war is matched by the character's internal tension between her role as a mother and a wife and her role as a leader of state.

"Pretty Fire" presented by 5th Wall Theatre, is Charlayne Woodard's autobiographical play exploring her childhood and the profound experiences that shaped her identity as a black woman in America, as well as her development into a performer who would win a Tony Award for her performance in "Ain't Misbehavin'" in 1978. Director Carol Piersol has opted for a minimalist approach, placing only a red bench at center stage, and dressing actress Haliya Roberts all in black, placing the emphasis entirely on her physical and emotional performance.

This excellent script and Roberts' masterful performance are really all we need. But Erin Barclay's lighting design is pure artistry, especially in moments of emotional intensity, when the lights become the fire, the rain, the shadows of racism and sexism cast across a bare stage.

Roberts' energy is infectious and engaging, and her versatility is astounding. She embodies countless characters, sometimes two or three at once, transitioning effortlessly between gender, age and race with a raised eyebrow or a slight adjustment in stance. Piersol's direction and Roberts' sheer talent combine into something beautifully confessional, profoundly moving and exhilarating in its delivery.

All shows run at just around an hour and a half, and all performances will take place at the Basement, 300 E. Broad St. For a calendar of performances, including information about talk backs and moderated discussions, and to purchase tickets ($20-$25), visit 5thwalltheatre.org.