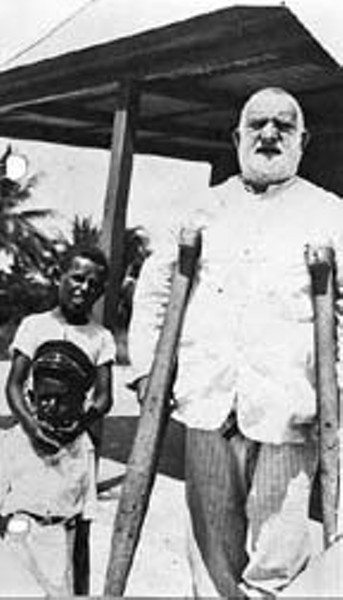 There are a pile of Mosbys in the Richmond phone book, after all. And according to Gray, there are lots more Mosbys in northern Queensland, especially on Thursday Island, who are interested in finding out more about their ancestry. "Imagine reuniting a family after 140 years," Gray writes in an e-mail. "It would be sensational!"

According to stories Gray has unearthed, Edward Mosby was related to a famed Confederate Ranger, John Singleton Mosby, and may have served with him during the Civil War. Edward Mosby later worked on a whaling ship, fell out with the first mate and settled on Massig Island, near Queensland.

There, Gray says, he married an island woman. Mosby became a respected leader among the Massig people when he organized an ambush attack to repel warriors from another island.

"When the warriors from Mer beached their canoes and ran up the beach they were immediately met with a shower of arrows from the concealed Massig, and half the attacking force fell on the blood stained coral beach," Gray writes.

Thereafter, Mosby prospered in pearling and harvesting bˆche-de-mer, a kind of sea cucumber that's eaten in some Asian countries. Mosby later lost a leg to coral poisoning, Gray says, which kept him from going out to sea. As an old man, he would sit on his veranda and sift through his collection of pearls.

"He would take them out of a canvas bag and put them on a table under the light of an oil lamp and explain to his four sons that one day these would pay for their education in the United States," Gray writes, "'where they would meet all of their relatives in Virginia.'"

Mosby died in 1911, when he was about 71, leaving his family to guess at both the whereabouts of the Virginia relatives and his fabled pearls.

Gray doesn't know where the latter may be hidden but still hopes to find the Virginia branch of Yankee Ned's family. "It is felt it is high time the Mosby families of Thursday Island, Australia and the Mosby families of Virginia reunite a shared bond of kinship," he writes, "and meet family members neither knew they ever had."

Gray can be contacted through his Web site, www.acwv.info. — Melissa Scott Sinclair