While Richmond prepares for the tea party, the movement reaches a fevered pitch.

Jamie Radtke is watching the tea party movement in Virginia grow beyond her wildest dreams. As a social and fiscal conservative, she was “outraged” that former President George W. Bush was spending $787 billion to bail out rich banks. President Barack Obama, she thought, would be spending much more, pushing big government, running up the federal debt and threatening basic constitutional freedoms.

The 36-year-old tax consultant, with a master's degree in public policy from the College of William and Mary, was spending her time home schooling her three young children. Just three months after Obama took office in 2009, she accepted an invitation to speak at a rally organized by a new grass-roots movement called the tea party, with the letters of the first word standing for “taxed enough already.”

The biggest evidence of the local movement's success comes this weekend, when thousands of self-styled patriots will throng the Greater Richmond Convention Center on Friday and Saturday, Oct. 8 and Oct. 9, for a series of speeches and panel discussions. In attendance will be such conservative luminaries as illegal-immigrant basher and former CNN anchor Lou Dobbs, physician and libertarian Congressman Ron Paul, hard-right activist Attorney General Ken Cuccinelli and others.

Gov. Robert F. McDonnell and Lt. Gov. Bill Bolling, both Republicans, will headline a panel discussion on streamlining government. Tickets are $50 for two days and for $20 attendees can attend the Freedom Lovers Extravaganza at the Richmond Marriott next door featuring Atlanta hip-hop group Mo' Sol.

The Richmond soiree underscores just how quickly and powerful the diffuse and disparate tea party movement has become. A Wall Street Journal-NBC News poll released last week shows that 71 percent of Republicans, a formidable majority, are sympathetic with tea party goals. The poll also projected that one-third of voters heading to the polls in November will be supporters of the tea party movement.

The O'Donnell phenomenon spotlights the curiosities and contradictions within the tea party movement. Initially, media commentators dismissed members as not-very-bright hard liners on the order of Sarah Palin and sometime gun nuts just a shade less reactionary than survivalists or militia members.

Despite the prominence of several black speakers at movement events, members also were cast as mostly white and middle class. Because the tea party didn't surface until after the election of the nation's first black president, the movement has carried a racial stigma. 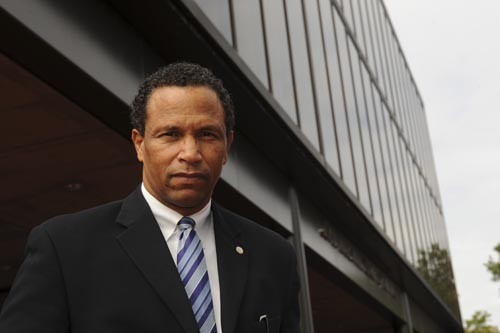 To help dispel the notion that the tea party is racist, local officials refer reporters to such party members as Gilbert Wilkerson, a black real estate agent. “They are very much open to African-Americans,” he says.  Photo by Scott Elmquist

The image tea party members prefer is that they are patriots who bow to neither political party. They make great efforts to present themselves inclusive to all, especially blacks. When a reporter contacted the Richmond Tea Party to speak to members, the first one on its suggested list was Gilbert Wilkerson, a black real estate agent who's been a Republican for years. “I am interested on principles, such as free markets and personal responsibility,” Wilkerson says. “They are very much open to African-Americans.”

While liberal analysts slam the supposedly bottom-up populist movement as AstroTurf, a term for a movement that feigns an appearance as grass roots, there's no denying its double-time march into prominence by tapping underlying, pent-up frustrations in the wake of a brutal recession and so-far jobless recovery.

“They seem to be quite well-organized in Virginia,” says Bob Holsworth, a former Virginia Commonwealth University political scientist and managing principal of DecideSmart, a consulting company. Holsworth is also moderating a panel discussion with McDonnell and Bolling on government reform at the upcomingconvention.

One effective tactic used by the movement is to keep its flexibility by asking members to adhere to five broad principles such as pushing for limited government and the dominance of the U.S. Constitution rather than follow any strict and detailed party discipline. It avoids divisive issues such as abortion and homosexuality even though many members may have strong opinions about them.

“One of their big successes is that they have stayed away from and stayed united by avoiding social issues,” says Isaac Wood, a political analyst at the Center for Politics at the University of Virginia. “They value a nonhierarchical approach and they are bound by ideals, not bylaws.”

To get a sense of the homespun nature of the tea party, go no further than the New Kent County Middle School, about 35 miles east of Richmond. One balmy, early autumn evening, supporters prepare for a rally. Tables outside the auditorium offer “Don't Tread on Me” rattlesnake T-shirts for $10. Many wear “Fire Pelosi” buttons, referring to the Democratic speaker of the House of Representatives.

The crowd of about 150 is mostly older than 50, middle-class and dressed country casual befitting the piney woods county of about 13,000.

Organizer Ron Stiers is unfailingly polite while he introduces attendees. The New Kent chapter was organized earlier this year with help from the Richmond Tea Party. “They are helping us with tax registration, that sort of thing,” he says. “We keep growing and growing and growing.”

“I want to make a difference and cut spending and the size of government and bring back the conservative values of 50 years ago,” says Bill Sickles, a retired executive. Jim Hall, another retiree, says he's dissatisfied with government and “runaway spending.” Asked when he thinks the problem started, he quickly replies, “over the last two years, with Obama.”

Sickles then reappears and tells a reporter, “I have found a Democrat for you.” The Democrat is Maria Agans, one of Sickles' neighbors, who is amused to have been singled out. “I'm one of his neighbors,” she says, smiling. “I'm not a tea party member. I just want to hear what the speaker has to say about Christian values and politics.”

Ray Charles sings “America the Beautiful.” “Have you met any racists yet?” a man asks the reporter, grinning. Meanwhile, the slide-show message gets tougher. A tea party theme song — a country music ditty titled “When You're Holding a Hammer” — presents the idea that George Bush is being unfairly blamed for Barack Obama's excesses.

The facts and imagery somehow get mixed up. The screen text slams what it calls liberal policies such as the $787 billion Troubled Asset Recovery Program to bail out banks failing because of their bad plays in the risky but lucrative subprime mortgage market. The program however, was put together by Secretary of the Treasury Henry Paulson in 2008 during the Bush administration before Obama took office.

The messages on the screen get tougher still. “Leftists and liberals, we are coming after you. Nov. 2, 2010,” it reads. At the podium, a speaker appears and the audience stands to recite the Pledge of Allegiance, a prayer and then sing the national anthem. A tall and trim Army master sergeant is recognized for winning the Bronze Star in Iraq.

The featured speaker, Bishop E.W. Jackson Sr., finally appears. Jackson is a Harvard Law School graduate and minister from Boston who retired to Chesapeake in Tidewater. He's big on the conservative speaking circuit and orates with the clear and loud cadence of a fundamentalist preacher. “If they think we're terrorists,” he booms, “then let them wake up that Wednesday morning and see the explosion in the voting booths.”

With each Jackson punch line attacking Obama, slamming smug Europeans and praising personal responsibility, the audience stands and cheers loudly. But there's one jarring contradiction in the auditorium. Bishop Jackson and his assistant are the only blacks in the room.

Plenty of questions remain as to whether the movement is truly an authentic, bottom-up movement. To be sure, there have been a number of populist movements throughout American history, including ones slamming either big business or government. In the 1890s, the U.S. People's Party attacked big corporate trust such as John D. Rockefeller's Standard Oil. The 1912 Progressive Party supported the common man and was led by former Republican President Theodore Roosevelt and Robert M. “Fighting Bob” LaFollette.

Right-wing efforts against the supposed trespasses of federal power were led by former Alabama Gov. George Wallace. In other countries, including Germany, populism sometimes led to fascist governments such as Adolf Hitler's.

Today, the disconnection between the tea party movement's unquestionable power and the subtle merging of fact and propaganda has politicians and analysts scratching their heads. There's no question of its conservative nature but it doesn't always back Republican candidates.

“The tea party? I wish you'd ask me an easy question,” quips state Sen. Don McEachin, a prominent Richmond Democrat. Uncertainties that he sees are the movement's lack of a coherent policy and clear economic policies. Its influence, however, is substantial, he says: “I think the Republican Party would like to co-opt their message as their own.”
Among Virginia Republicans, only one — Attorney General Cuccinelli — seems to have an easy entree into the movement. He's positioned himself as an outspoken and aggressive conservative who can just as easily shake up the Republican establishment as sue the Obama administration over health-care reform or defend Arizona's anti-illegal alien efforts in the face of a federal lawsuit.

McDonnell and Bolling seem late to the game. Their involvement in this weekend's convention was announced just two weeks ahead of the event. Other Republicans, such as House Minority Whip Eric Cantor, seem left out. Radtke says she questions Cantor's continued support for government spending while claiming to be a budget hawk. Her wrath extends to GOP state legislators. “I'm really frustrated with the Republicans voting for doubling the size of the state budget in a few years,” she says.

In response, politicians such as Cantor are trying to recast themselves as distinctly anti-Washington. He, for example, is co-author of a book titled “Young Guns: A New Generation of Conservative Leaders” that tries to present him as a youthful contrarian willing to take on Washington's entrenched interests. Cantor almost never voted against the Bush administration when it was in power, however. The Republican Party's Pledge to America unveiled on the eve of November midterm elections draws heavily from the populist tea party playbook.

Also uncertain is how the tea party gets its funding. Media reports claim that money is coming from such people as Don Blankenship, the embattled chief executive of Richmond-based Massey Energy, which has pumped millions into political races in West Virginia, where the company has big mining operations. The New Yorker magazine recently raised questions about whether ultra-right David and Charles Koch, owners of a huge Kansas conglomerate and oil concern, were funneling money to the tea party through a group called Americans for Prosperity.

Tea party leaders such as Radtke say they are concerned with ordinary Americans and want to protect freedom and justice. “The average American lost 40 percent of his 401(k) in the market crash, yet we are bailing out [giant insurer] A.I.G.,” Radtke says. “In just 20 months Obama has managed to increase the federal debt by $2 trillion in real and projected spending while Bush increased the debt by $3 trillion over an eight-year period.”

Despite their protests to the contrary, the tea party's cadre of supporters appears to be mostly white, middle-class and reactionary. But the movement is a growing and influential force reflecting the frustration and anger of ordinary voters. S