It can take a lot more than gigging to make a living in music. For one member of No BS Brass, the answer is in schools - lots of them. 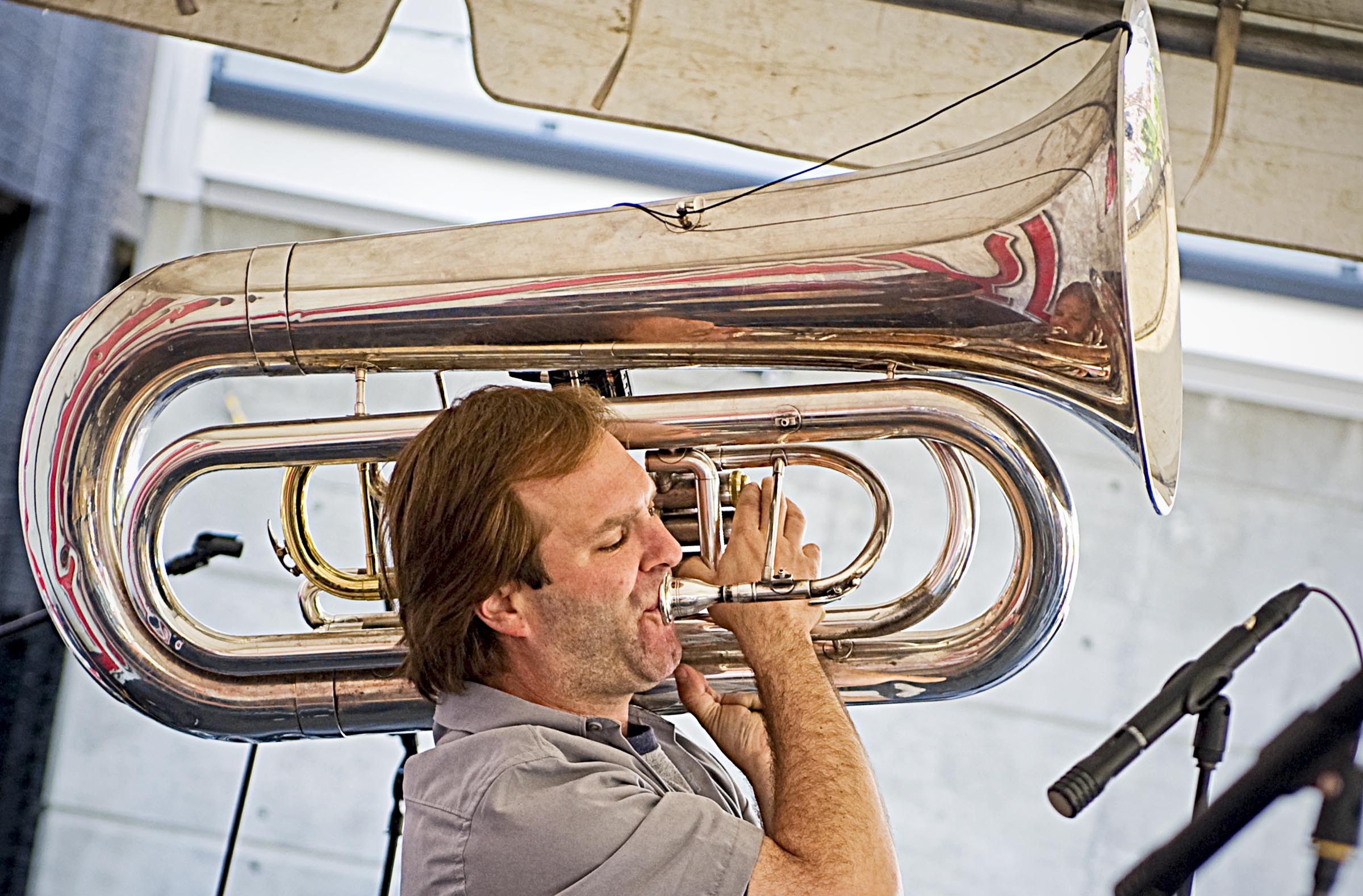 Stefan Demetriadis pumps out the low notes in the back row of the No BS Brass Band, pouring the funky foundation on the biggest horn while others take turns in the spotlight. He's perhaps the easiest player for eyes to miss and the most difficult for feet to ignore. Playing a bass line isn't a glory-seeker's role, but without it everything else falls apart. Like teaching.

Virtually every working musician in town teaches. A select few are professors, more are adjuncts, some are full-time teachers, others teach private lessons. But few have as dizzying a patchwork of school gigs as Demetriadis.

That's all while playing in the RVA Big Band every Monday night at Balliceaux, practicing every Thursday with No BS Brass and performing in other bands.

Demetriadis coaches kids in the low brass horns, from the tenor sax down. The specialized skills required to give weight to the sound of a marching band are rarely found among music teachers, who are generalist by nature. With school arts budgets flat at best, hiring an expert like Demetriadis depends on boosters, such as the parents of the 100-odd kids taking part in extramural music programs. Bake sales and other fundraisers produce only so much, and it takes a lot of programs to pay the rent. To that end, Demetriadis put 43,000 miles on his car last year.

Hooten, an adjunct and big band jazz leader at Virginia Commonwealth University, says he admires Demetriadis' passion and ceaseless championing of the kids in his multiple programs. The practical scheduling challenges are reflected in the title of an early No BS CD, "Waiting for Stefan."

"It's not that he is not responsible by any means," says Robin Yohe, instructional specialist for the Performing Arts for the Chesterfield County Public Schools. Yohe has known Demetriadis since he was a student at Meadowbrook High School in the early '90s, dating one of the girls in her chorus. "He still has that love for music that he had as a student," she says. "He hasn't been jaded or hardened. Kids are so excited about music, it is all about learning and soaking it up. Maybe because he is the same way he is still able to make that connection" with students.

Making that connection may require driving more than 160 miles a day, mornings spent in Madison, afternoons in Chesterfield County. The rhythm is set by the school year: band camp in the summer, marching band during the fall football seasons, show band season in late winter, and the year-end student evaluations in the spring.

Demetriadis may be a hired gun, but he takes unmistakable pride in his work, and in the accomplishment of his young musicians. The Iron Fist low-brass gang at Cosby, the Big Cheeks Clover Hill show choir band, and 360 — a band drawn from schools along the state route stretching from Chesterfield to Mechanicsville. Because of Demetriadis, the drum line from Varina High School makes a guest appearance on the upcoming No BS Brass CD, "RVA All Day."

Piecing together so many gigs is a grueling exercise justified only by it being a source of joy. "It's great to have a Stefan," Yohe says. "Most free-lancers move on after doing it for a while in their early 20s. But he isn't a business kind of guy. He's an artist, living the life."

If his career is precarious, the applause goes to others, and the compensation is geared more to Goodwill than Saks, there is honor in the effort. Like all teachers even at the edge of the spotlight, he casts a long shadow.

Demetriadis describes himself as a "clinically addicted brass player," dependent on copper, tin and chrome. "I love band kids," he says, "and I love performing. Working this way I have the flexibility to take time off if No BS is going on the road. I could never choose to do just one or the other, I need both."