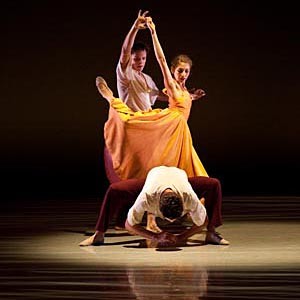 “The goal is to bring people into the theater and create a sort of oasis in this busy world,” says Stoner Winslett, artistic director of the Richmond Ballet. “We want to transport them into a higher plane that takes them away from their hectic lives.”

The company's forthcoming season ascends to a higher plane, bringing in five new commissions from contemporary ballet choreographers Val Caniparoli, Colin Connor and Gina Patterson. Connor has choreographed three wonderful works in the past — his premiere in Richmond (running Nov. 4-14) being his fourth new piece.

Winslet describes these pieces, performed in the ballet's Studio Theatre, as “casual,” saying that they “usually encompass a revival of a popular ballet that people have previously really enjoyed.” Paired with Connor's work will be “Valse Fantaisie” by George Balanchine and John Butler's “After Eden.”

Two performances on the schedule are pieces formerly seen at the ballet's New Works Festival, including “Ershter Vals” by Ma Cong (Sept. 30-Oct. 17), from 2008, but everything else is new. Look for another world premiere in April by the talented Val Caniparoli, who's worked with Richmond Ballet before. Caniparoli's successful piece, “Bow Out” was broadcast live on PBS in 2003 and is still played from time to time.

And then there are the big productions: “The Nutcracker” (Dec. 10-23) comes back for a second season at CenterStage, and “Giselle” gets a three-day run there in February.