For activists and LGBT people, the reasons for the ban are eerily familiar.

When Angel Ramirez woke up on the last Wednesday in July and checked his Facebook feed, he let out a heavy sigh and uttered an obscenity not fit to print. With a series of tweets, President Donald Trump put his happiness and health in jeopardy.

Ramirez, a resident of north Chesterfield and a transgender man, has been receiving hormone therapy treatments for about a year thanks to his veteran’s benefits. He joined the Army in the early 1990s at 23. It was a way for him to escape rough years growing up in New York.

“I got to see almost every borough in New York,” he says of his childhood bouncing from foster home to foster home. In his 20s, Ramirez was living in a halfway house and unemployed. One day, a trip to the pawn shop led instead to a trip to the recruiter’s office.  He saw it as a chance to travel, serve his country and most importantly, he says, “Do something good.” Years later, after leaving the military and meeting members of a local support group, the James River Transgender Society, he realized he was transgender and began transitioning with the help of Hunter Holmes McGuire VA Medical Center. Ramirez says the staff is always respectful. Most used the right pronouns, and if they make mistakes, offer genuine apologies.

And Sophia Lakis, a self-described military brat who spent many of her formative years in South Carolina, was similarly exasperated by Trump’s early morning outburst. She joined the National Guard at the age 17 at the behest of her father, who was a recruiter.

“It was more of a desperation thing,” she says. Lakis always knew she was different, but growing up in insular military communities in the South left her without the language to describe what she was feeling and with the problems that came with not knowing her own identity. 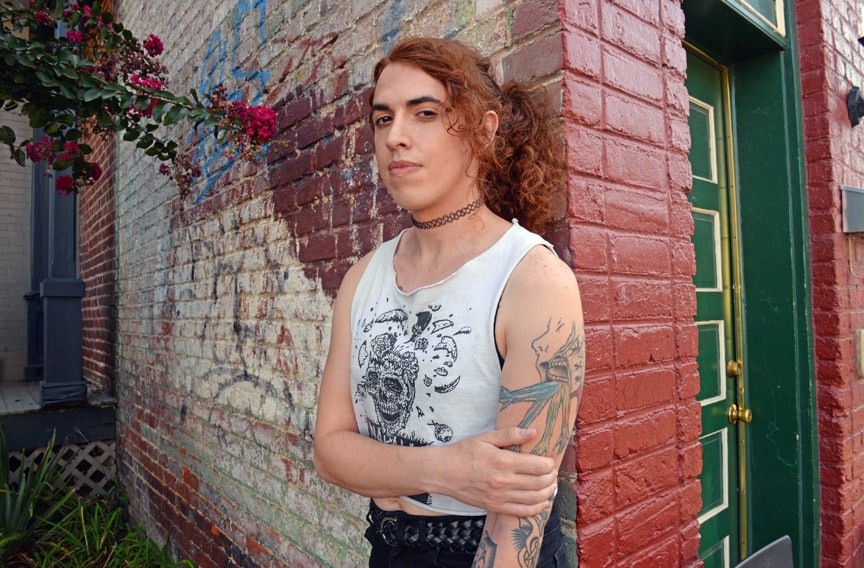 “Bases are like wombs — gated with armed guards,” she says, sitting in Saison Market wearing a Napalm Death T-shirt. Once she left the Guard years later, she slowly began living life as transgender female and hasn’t looked back.

In the case of Trump’s tweets, she questioned his motives and noted the early hour of the morning when they were sent out into the world.

Although Lakis doesn’t receive health benefits from the Department of Veteran Affairs as Ramirez does, the two are linked by both their service to their country and the lack of security under the new president. Back in 2016, on the campaign trail, Trump said that he’d do “everything in his power to protect LGBTQ citizens,” although his promise to uphold religious freedom — which could legalize discrimination against LGBT people — and his rollback of protections for transgender students have painted a very different picture for advocates.

Trump said that the military was “burdened with the tremendous medical costs and disruption that transgender” troops would cause. A 2016 study from the Rand Corp. estimates the total number of active, transgender troops to be fewer than 7,000. The economic impacts of trans medical treatment and number of troops who would lose readiness from that treatment is less than a tenth of one percent.

“You’re going to ruffle the feathers of a someone who is really loyal to their trans lieutenant or sergeant and wants to see them survive through a firefight,” Lakis says. “You take that person away, that’s detrimental for morale.” Ramirez pointed to the lack of any actual policy from the White House since the tweet. The Pentagon says that no formal policy has been received, and it doesn’t plan to change anything until that happens.

Ramirez, himself a person of color, points to the history of banning groups from serving their country. Trump’s concerns are almost identical to ones offered over the years — and these concerns citing troop morale or readiness have proven unwarranted again and again. “Just like gays in the military or blacks in the military or the Native Americans in the military,” he says “there’s always [been] discrimination. And none of the people that were biased against impeded [troops].”

Transgender service members have only been allowed to serve openly for the last year. President Barack Obama pushed for the change in policy, and that shift allowed people such as Ramirez access to the medical treatment he’s now receiving.

“I always knew I was transgender — I never thought I was transitioning,” he says. “I didn’t verbalize it, I lived it.”

Whether he’ll continue to live that life will depend on Trump. S