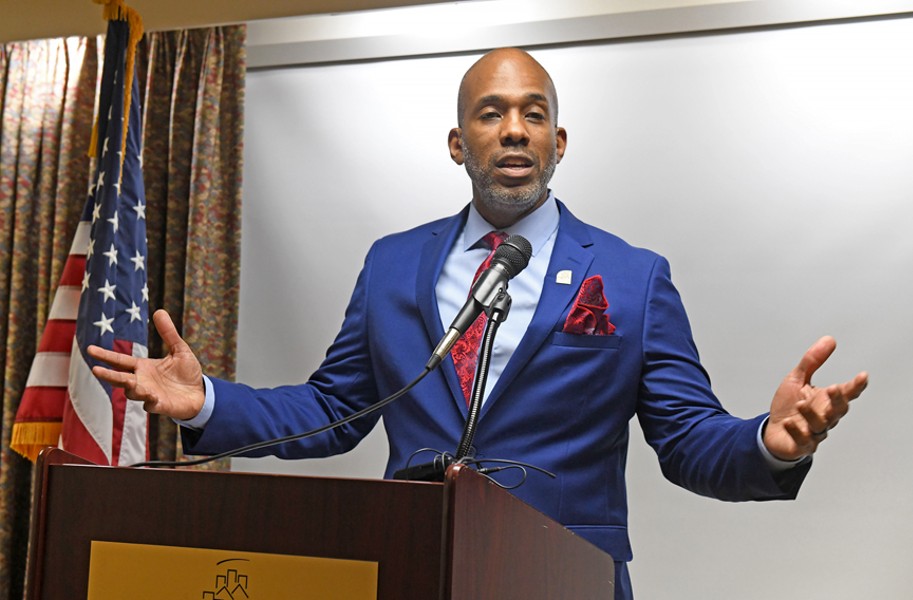 Scott Elmquist At the start of his seventh week on the job, the Richmond Redevelopment and Housing Authority’s chief executive, Damon Duncan, held a news conference to discuss his plans for the agency.

The new chief executive of the Richmond Redevelopment and Housing Authority doesn't mince words at his first news conference.

"We have some aggressive plans underway, and as I've been telling the board and some of the residents, that is not going to be pretty, it's not going to be sexy, it's not going to be glamorous," says Damon Duncan, who led a housing authority in the suburbs of Chicago before taking on his new role in March. "The housing stock has been deteriorating for quite some time. The units have outlived their useful life by at least 10 or 15 years."

The authority had been under the temporary leadership of Orlando Artze for more than a year when the Board of Commissioners hired Duncan. Artze stepped into the role after his predecessor, T.K. Somanath, resigned amid controversy around insufficient heating for hundreds of residents during a brutal cold snap in early 2018. Shortly after accepting the job, Duncan brought on his former colleague Terese Walton as executive vice president.

During his first six weeks on the job, which he describes as the assessment phase, Duncan says he's been focusing his efforts on meeting residents and staff, touring properties and "taking an inventory of not only what we have in terms of our physical assets but also our human capital as well." His career in public housing began in the early 1990s, and he notes that while he sees "a lot of similarities between the RRHA and a lot of [public housing authorities] around the country," he also sees challenges specific to Richmond.

"Richmond has a lot to offer for a city of this size," Duncan tells Style following the news conference. "Economically, if you improve the public housing, you improve the overall economics tremendously. We're going to do an economic impact analysis so we'll be able to provide some specific numbers around what that impact is going to be."

Another significant difference, he says, is that "some cities have done something about it." He points to cities like Atlanta, Detroit and his recent home of Elgin, Illinois, where he says public housing developments have gone through significant transformations.

When asked about priorities for the agency, Duncan identifies the No. 1 challenge, outside of the rapidly deteriorating housing stock, as an overall communications gap. He says he understands that in recent history, residents have felt they've been misled, or not told the entire truth, about the authority's plans.

"Sometimes people hear what they want to hear, but we are very intentional about the message that we deliver," Duncan says. "For example if I say residents have options, they have options within these parameters, which is different than 'You can do what you want to do.' So that's the challenge, open and honest communication, and just letting them know that change is coming."

The new executive knows that change is hard in any community, and new policies may ruffle some feathers in the beginning.

"One thing we didn't talk about, but we'll talk about at a later time, is the level of accountability that we're expecting from the residents in the way of participation with human services programs," Duncan says, explaining that the agency will move toward requiring able-bodied heads of households to work or enroll in education or training programs to receive public housing assistance or Section 8 vouchers.

"There are some things that we're going to start to make policy that may be controversial with some of the advocates and some of the other folks," he says. "But I believe, having worked on the supportive side and the development side, that a lot of these forces help to keep conditions the same."

Also on the horizon is the potential for additional policing in the authority's neighborhoods that see some of the city's highest crime rates.

"Like many [public housing authorities] across the country, a lot of crime takes place on public housing properties, but not by or to public housing residents, so it's an important distinction," Duncan says. "Whereas crime and tragedy is not good any way you look at it, in our capacity, I'd like to say that RRHA is not the perpetrator or the facilitator of the crime. It just seems that some people feel that they can go to the public housing communities and commit their atrocities and get away with it."

The housing authority disbanded its small police force in 2014, but Duncan says capital grant funds to the tune of $300,000 might go toward bringing it back.

He plans to meet with the interim Richmond police chief, William Smith, "to determine an approach to crime that's going to provide additional, visible patrols within our sites that are above and beyond the baseline services that RPD currently provides."