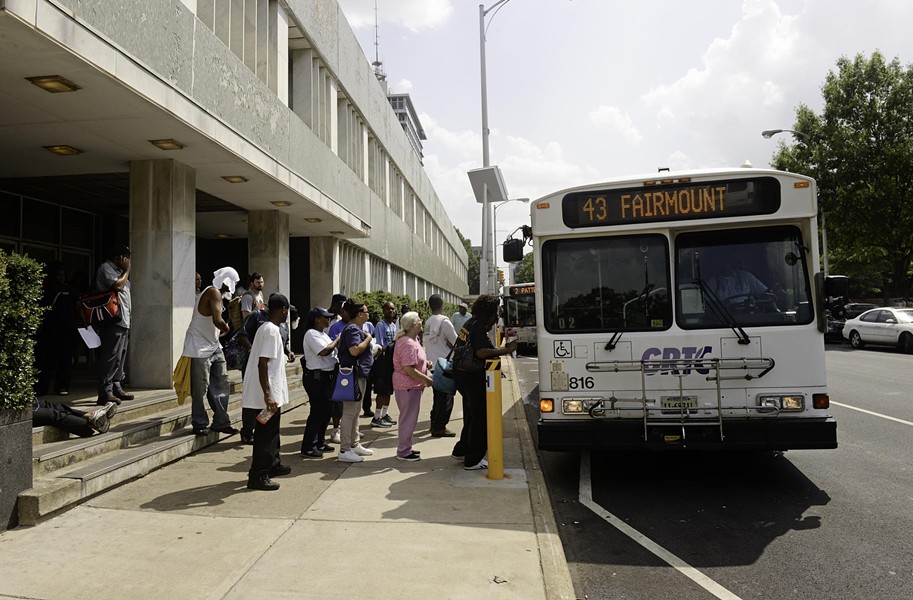 His crisply pressed blue shirt and trousers slowly wilt while he swelters in the unrelenting sun. The man awaits the Forest Hill bus at the recently hatched GRTC temporary transfer plaza on East Leigh Street. It's an unforgiving, hard-edged and treeless stretch of concrete sidewalk that overlooks the sunken service lot of the deteriorating Public Safety Building.

Suddenly, clouds darken, the heavens explode and he's hit by a tropical deluge. Drenched by the time the bus pulls into its bay, he climbs aboard. The riders aboard shake themselves dry as best they can. They're the lucky ones, because soon they'll be getting off. But this man, as the bus driver for the next few hours, will be miserably clammy and cold behind the wheel of the air-conditioned vehicle.

This is but one recent snapshot of the transfer plaza — a grim, insulting and inhumane concept that marks a low point in Richmond's undernourished public transit system. Stand — and stand you will — at the plaza for a even a few minutes and you'll be disheartened to witness with regularity old, infirm and confused passengers stumble along the equivalent of a three-block stretch of buses only to watch their vehicles pull off without them. What follows may be a 20-minute or one-hour wait. There are no designated restrooms, no shelter from the elements and too few places to sit.

The plaza is a bumper-to-bumper stretch of coming-and-going buses along North Ninth Street from Marshall, past Clay and around the corner at Leigh. It opened April 20 to reroute some buses from Broad Street to accommodate the national collegiate road championships held here in May and an international cycling event in September 2015.

How nice for the out-of-town cyclists and spectators.

But for the 5,000 to 6,000 daily bus riders — overwhelmingly black and many old, disabled and probably poor — the situation borders on cruel.

Where it used to be possible to board a bus at the western end of town — say, at the Village Shopping Center or St. Mary's Hospital — and continue to the East End with an uninterrupted trip, a rider now must get off, wait for a second bus and transfer for an additional charge. For the frequent riders, this is significant time and money.

It's also possible that patrons watch their connecting buses pull off because of the linear configuration of the so-called plaza. For them the wait continues.

As for the fancy new electronic boards announcing bus arrival times, these are mostly unreliable, because not all buses are equipped with satellite apparatus.

As for calling this place a plaza? Please. My image of a plaza conjures something pleasant — an urban square or a landscaped space with such amenities as comfortable benches and shelter, perhaps a gazebo or pedestrian arcade. To use the term for this stretch of buses is a misnomer. (It also makes me crazy when the word is used for rest stops, but at least on the New Jersey Turnpike you can grab coffee, eat a meal and use the restrooms).

Richmond's bus transfer plaza offers no shelter except under the entrance canopies of the safety building. And it isn't fair to the employees of that building to have a teeming mass of humanity huddled at all hours escaping fatigue, sun and rain.

It also doesn't help that the so-called plaza faces west. There are no shade trees. The only landscaping is an evergreen hedge sprouting from a planter box attached to the safety building. Its branches appear to have been recently hacked back with a dull machete.

While the current set-up has been pitched ostensibly to accommodate cycling events, there are suspicions that city officials long have wanted to remove the clusters of the working underclass awaiting buses along Broad Street in the vicinity of the Greater Richmond Convention Center and nearby hotels and apartments. It isn't the image they want to project to tourists and conventioneers strolling along this listless stretch of downtown.

Plans for a permanent bus transfer station have been percolating for some time. The concept is a positive thing — scores of cities, including Petersburg, have such facilities. Where to establish a station here has been the sticking point. Main Street Station was bantered about, but to no avail. And when a transfer station was suggested for East Grace between Sixth and Seventh streets, the folks at CenterStage freaked out. The location is too constricted for a continuous parade of buses.

And so a bus transfer station on the backside of downtown is the solution — near the city courthouse and the social services and public safety buildings. Maybe the thinking is that Richmond's poor will find the short walk to these facilities a convenience.

Note that commuter buses serving the handful of routes in Henrico and Chesterfield counties aren't routed through the transfer station. They still pass through the more discreet financial district.

What to do? At the very least, shelters should be installed immediately to provide a modicum of protection from the elements. And additional places to sit. But more important, perhaps this unfathomable situation will spark discussion on how to establish a public transit system that encourages more people to take the bus rather than dodge it. Why aren't tourists on buses? Or more school children? And why does Virginia Commonwealth University operate a downtown transit system when GRTC buses follow the same basic routes?

I ask a man, who is sweating profusely and shading himself with a newspaper how he's doing while waiting at the transfer plaza. "You can't be proud if you're on the bus," he says.

We can't have pride in a city that delivers so little to those who have even less that they've come to expect next to nothing. S