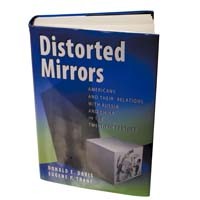 Why do Americans tend to view Russia negatively and China positively?

The question's hounded me for years. As a Moscow correspondent for BusinessWeek in the 1980s and '90s, I used to ponder the perceptions when I would sit in the occasional story session during visits to the magazine's New York headquarters. The editors always seemed to distrust whatever came out of Russia, while China was OK. I thought that was unfair.

So I was intrigued to see a new book by former VCU President Eugene P. Trani and Donald E. Davis, a former history professor at Illinois State University. Their effort, “Distorted Mirrors, Americans and Their Relation with Russia and China in the Twentieth Century,” follows an earlier book explaining how President Woodrow Wilson's misunderstanding of the early Soviet Union touched off the first Cold War.

The new book, published by the University of Missouri, explores the underpinnings of the perceptions, many misplaced, that drove relations with Moscow and Beijing during the past eight or so decades. The authors posit that many misconceptions resulted in foreign policies that were often dangerously wrong-headed.

There's much to compliment in their effort. The writing style is swift and efficient. The tone is even-handed and the arguments are easy to follow.

What undermines the book is that Davis and Trani don't really supply much analysis. Instead they dart from anecdote to anecdote, supplied too often by the familiar memoirs of familiar people such as Kremlinologist George F. Kennan, American journalist Theodore White, author Pearl Buck and others.

Trani and Davis are stronger when they deal with the earlier periods of the subject history from 1900 until World War II. Much of the negative view of Russia, they claim, can be traced back to the critical Siberian travelogues by a relative of Kennan in the late 1800s and the writings of American academic “Soviet” Sam Harper on the eve of the Bolshevik Revolution.

Their negativity was augmented by the “Riga Boys,” young State Department Kremlinologists such as Kennan and Chip Bohlen, who adopted a hard-nosed approach when they watched the Soviet Union from the Latvian capital, because Washington refused to recognize the Soviet government until 1933. Unlike his predecessors, Franklin D. Roosevelt took a much friendlier approach to Russian leaders such as Stalin. But longer-term, people such as Kennan prevailed. His famous “Mr. X” essay of 1947 was a road map toward anti-Soviet containment ideas that became Washington's policy until the Soviet Union fell apart in 1991.

Regarding China, Trani and Davis note that early attitudes were shaped mostly by Protestant missionaries from the United States who took a benevolent approach toward ordinary Chinese and overlooked warlord horrors. Pearl Buck's charming novels captured the imagination of the American public in the 1930s. Later, corrupt leaders such as Chiang Kai-shek were deified by the likes of Henry Luce, the China-born founder of Time magazine. Savvy journalists such as Edgar Snow and expert China-hand diplomats such as John Patton Davies and John Stewart Service were marginalized by Communist-baiters.

Davis and Trani do a good job of explaining the roots of the different perceptions. Once they get into the Cold War, however, the book reads like it was churned out to beat a deadline.

The chapter on arms negotiator Paul Nitze reads like a cut-and-paste job. The authors make sloppy errors such as stating that from 1961 to 1968 the United States had to deal with Nikita Khrushchev, who was ousted in 1964. They refer to the test of the “most powerful” nuclear bomb ever of 150 kilotons in 1961. The United States routinely set off tests of megaton-level devices in the South Pacific a decade before.

The authors also read too much into U.S. News & World Report correspondent Nicholas Daniloff's arrest for espionage in 1986. I arrived as a correspondent in Moscow just a few weeks before the arrest. The incident was actually a not-uncommon tit-for-tat deal set up by the KGB to free an accused Soviet spy arrested in New York by the FBI who, like Daniloff, had no diplomatic immunity.

A few other nits: Stalin and Mao were among the greatest mass murderers in history, yet Trani and Davis don't hit that one too hard. The authors don't seem to pay much attention to the popular U.S. opposition, if not hysteria, to communism in the 1920s and 1950s. Nor do they note how Eastern European ethnic lobbies in this country mustered outrage against Soviet abuses in their homelands.

The authors also don't appear to use original sources from either Russia or China even though plenty of material is now available. Washington Post correspondent Michael Dobbs, for instance, used recently released secret Soviet documents to paint a terrifying new picture of the Cuban Missile Crisis.

For Richmonders who know Trani as a powerful mover and shaker on the local scene, the book shows the just-retired VCU president in a different and positive light. Despite some flaws, the book would make for a good summer read.  S