While the ballpark debate rages on, plans for a transportation hub in Shockoe Bottom gather steam — and millions in federal funding. 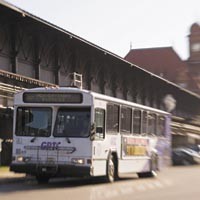 Those empty parking lots in Shockoe Bottom have suddenly become very crowded, the target of big proposals and $300 million promises. Highwoods Properties, a North Carolina developer, envisions a ballpark nestled among chain retailers and condominiums, but questions about financing persist. Some preservationists and historians want to memorialize the site of Lumpkin's slave jail. Plans have gathered momentum but a concrete proposal has yet to emerge.

Meanwhile, a third project has quickly and quietly gained money and political support — a multimodal bus transfer station — and not everyone's happy about it.

John Lewis, chief executive of the regional bus company, the GRTC Transit System, has long had his eye on a vacant train shed behind Main Street Station. He wants to rehabilitate the second, track-level floor to become a sheltered transfer center offering a one-stop hub for trains, buses and future rail or express buses — Richmond's own little Union Station.

It would be more hospitable than the steps of the Library of Virginia on Broad Street, where most in-city riders switch buses. For suburban riders coming in on express routes the transfer station would be an attractive gateway to the city, he says.

Last week transit system learned it would receive an initial $11.2 million cash infusion from the federal stimulus package. The money would speed the design of the project, and Lewis says he hopes to pull the full $70 million budget out of the national rescue plan, setting him on a course to complete construction in two to three years.

While that's good news for Lewis and the bus company, some people say the transfer center's accelerated timetable comes too quickly and quietly.

Put Highwoods in the too-quickly category. The developers didn't envision having a transfer station so soon in their timeline. Highwoods proposals going back two years have typically contemplated the transit center rehab in the final phase of development — the first phase is expected to be complete by 2012 — after retail contracts and condo sales have been locked in, and before sticky questions about bus traffic present themselves.

The projects seem to be completely decoupled. Indeed, Highwoods spokesman Pete Boisseau says “the city has told us not to get involved in negotiations with GRTC.”

Even so, Boisseau maintains that the project would benefit from transportation being integrated into the plan “if it's done right,” citing bus traffic through the narrow, ancient street grid as a concern. But it may be a little more nuanced than that.

David Napier, owner of the Old City Bar and president of the Shockoe Bottom Neighborhood Association, holds out hope that Highwoods and the transit system will work together to craft a plan that melds with the neighborhood and future development. There's also the pesky issue of the type of rider on the buses.

“The Highwoods people were saying that they wanted to get this project going and develop the type of project that would make a transportation hub useful to a type of rider that's different from what we already have,” Napier says. “Right now, mostly the perception of the ridership is people who can't afford a car, as opposed to people who opt for it. It's really perceived as a lower-class ridership as opposed to bigger metro areas where everybody uses mass transit.”

Lewis says the transfer station will be a diverse one, including people who currently use the city bus lines and suburban commuters.

Rachel Flynn, the city's community development director, says she'd like to see more conversation between Highwoods and the transit system to ensure the two projects work together in the name of good urban planning.

Flynn has reservations about the design and the speed at which the Main Street Station plan is shooting through. “It's intricate,” she says. “It has detail. It needs character. It's got to serve a lot of people and a lot of things,” while maintaining its architectural significance. “These big shed buildings, very few remain,” she says. “They're like the grand train stations that you see in Europe…the tall side walls are all glass and iron, very elegant trusses. It's very dramatic

She's also worried about how the buses will get in and out of the shed, and other traffic complications that might be compounded by the Highwoods development. “We just did this big master plan project,” she says. “You'd have thought we'd be very closely linked to the design of this.”

On this point, she has an ally in 1st District Councilman Bruce Tyler, who says he's concerned the project will trample on the Lumpkin's Jail site. “I hate to think we're going to tread on a national heritage site with a freaking transfer station,” he says.

As part of a raft of changes he's advocating before the Richmond Planning Commission — many aimed at undoing aspects Flynn sees as fundamental to the master plan — Tyler's pushing an amendment aimed at slowing down Main Street Station. “We need to defeat that,” he says.

While parts of the administration and City Council may have concerns, Mayor Dwight C. Jones supports the effort. “The mayor is thoroughly behind that project,” his spokeswoman, Tammy Hawley, says. “He sees it as encouraging economic development, tourism and revitalization of Shockoe Bottom.”

She adds that the city is confident that the station will not interfere with the preservation of Lumpkin's Jail, also one of Jones' goals. Asked whether the city is concerned about how it may interact with the Highwoods project, Hawley says it's a “separate matter for us. It would be an enhancement for the area regardless of other development — whether or not other development takes place.”

For now, it appears that GRTC has a stronger hand. The bus system has struggled with finances, ridership and a public perception problem that's kept it largely out of the counties and condemned as an eyesore on Broad Street. But Lewis is uniquely positioned to milk the federal stimulus package.

For five years, he worked as an aide for U.S. Sen. Barbara Mikulski, D-Maryland, and has maintained some of his Capital Hill habits. Chief among them is the bus system's maintenance of a $120,000-a-year contract with Patton Boggs, an elite Washington lobby shop that has also represented the likes of Wal-Mart, AOL Time Warner and the governments of India and Saudi Arabia.

Depending on how you look at it, all that muscle coupled with the historic funding in the stimulus package has given the transit system a head of steam, or a steam roller, in the ongoing debate about how to develop Shockoe Bottom.

Boisseau of Highwoods says, “I think ultimately whose call it is — is the money.” S