University of Richmond’s newest building doesn’t look like one. 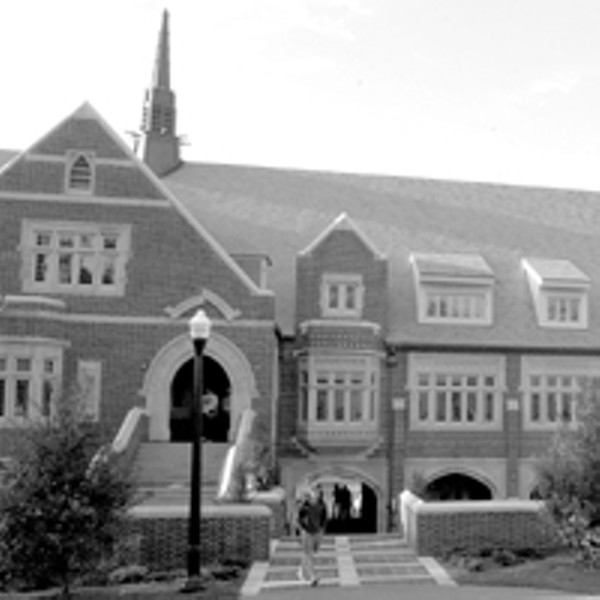 If Richmond has a reputation for a beautiful and well-equipped physical plant, it is because the school works hard to build on the architectural legacy it began in 1914. That year, the Boston architecture firm of Cram, Goodhue and Ferguson established a campus master plan and designed the first half dozen buildings. As in designs it was developing simultaneously for West Point and Princeton, the firm mandated the Gothic Revival style at Richmond for the women’s and men’s campuses that flanked Westhampton Lake. The campus dividing line between men and women has fallen recently, but the medieval architectural mode still holds sway after nearly a century.

With the recently completed 38,000-square-foot Weinstein Hall, the university’s newest academic building, the campus has received perhaps its lustiest example of a Gothic exterior since the world-renowned Gothic-meister himself, Ralph Adams Cram (1863-1942), was calling the shots. Weinstein acknowledges and plays off its hilly site, embraces and salutes neighboring buildings and boasts hearty architectural detailing. Compared to other new buildings at Richmond, it is Godiva next to Whitman’s—delectable, not just OK.

The Richmond firm of SMBW Architects approached this commission not by attempting to parody preceding traditions but by thoughtful consideration of Cram’s original intent. This is obvious in two ways — the placement of Weinstein Hall on the campus and in the fine touches.

Cram’s master plan called for tight cloisterlike arrangements of connected buildings hugging the crests of the two hills flanking the lake. But within a decade of the completion of the initial buildings, the school was already expanding by scattering buildings among the soaring pine trees. And by the 1970s, the lake had become the campus focal point with the student commons building being built on pilings atop the dam. If Cram had envisioned the lake as something to be enjoyed as a delightful rural visa, the lake was now in the basement.

At Weinstein Hall, as university planners have tended to do recently, SMBW has strengthened the original cloister concept by attaching this new building to an existing structure. This union creates a tighter and pleasing configuration around the Stern Quadrangle. This strengthens the outdoor space as an elegant campus crossroads bracketed by Ryland and Jepson halls.

Weinstein is an extension of the existing, 15,000-square-foot political- and military-science building. This diminutive structure was built on a steep hillside. The mass of the new Weinstein doesn’t overwhelm the older structure, but instead takes its cues from its elder. On the Stern Quadrangle (or eastern) side of the building, Weinstein appears to be one-and-a-half stories. On the western side, which fronts a parking lot and therefore experiences a scale change, the building has four floors.

Previously the parking lot side was the backside, and it looked like one. While the new building is not as ceremonial on the west as on the quad side, it has a definite presence. The cleverest trick here is how the architects placed a pedestrian arcade that burrows through the building to connect with the Stern quad. The tunnel’s axis is aligned with the clock tower of Whitehurst, a student activities and study building that also houses the office of the Richmond College dean of students. A series of steps in the tunnel acknowledges the grade change and adds architectural interest.

On both the eastern and western sides of Weinstein, pointed portals create two monumental arches. By recalling other such openings at North Court and the drive-through at the Modlin fine arts complex, SMBW nods to a Richmond architectural tradition.

If the massing of the new building is masterful, so is the detailing. In the picturesque tradition, the building is asymmetrical. Gables and dormer windows punctuate the solid roofline. Gently projecting bay windows and limited striping create a gentle visual rhythm in stone and break the expanse of red brick. There is heightened and richer detailing at key places such as the entrances.

I have often wished that Richmond would break out of its red-brick-only mold and move to a larger building unit—ashlar stone. But there must be something about the characteristic red brick that wins this campus so many admirers. Perhaps it is softer than the gray stone that characterizes other campuses built in the Gothic Revival tradition, such as Duke and Northwestern.

Besides the terrific stepped tunnel, the steep change in grade on the site of Weinstein Hall created other opportunities. There is a sunken, outdoor terrace on the Stern Quadrangle side that becomes an outdoor room, reflecting an architectural tradition found in gardens adjacent to Keller Hall and North Court.

On the inside there are comfortable, well-detailed spaces (note the broad windowsills) for classes, research areas and faculty in the journalism, political science, sociology-anthropology and rhetoric communication studies departments. One of the older wing’s glorious spaces, the Brown-Alley Room, has been reclaimed with its oak paneling and decorative plaster.

Weinstein Hall building maintains, reinforces and builds on Richmond’s architectural traditions. The visitor from New Jersey was right-on — it lacks for nothing. S