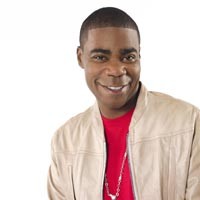 During his days with “Saturday Night Live,” Tracy Morgan made a name for himself when he took on the title of being the show's “other black guy,” a role he used with hilarious effect during his seven-year stint to help produce some sincerely memorable sketches, from a Songs of the South-inspired commercial advertising Uncle Jemima's Pure Mash Liquor, to the nonsensical exclamations of Brian Fellow(s) and his wildlife TV program, “Safari Planet.” While Morgan has solidified his comedic status playing an unpredictable caricature of himself as Tracy Jordan on NBC's “30 Rock,” it's obvious the guy still enjoys getting his fix in front of a live audience. With an additional show recently added, Morgan brings his stand-up act to the National for a special seated show Saturday, April 11, at 8 p.m. and 10:30 p.m. Tickets are $25. 612-1900 or www.thenationalva.com. — Mike Hilleary