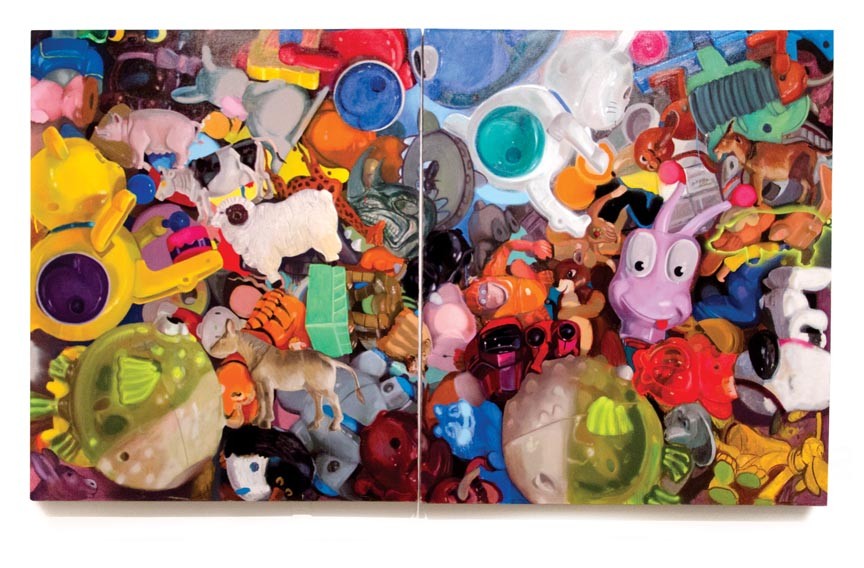 When hearing the words still life, landscape or portrait, you might think of images of flowers resting in a vase, green pastoral hills freckled with farm animals or wealthy subjects donning frilled collars. But Megan Marlatt, a Virginia artist and painting professor at the University of Virginia, challenges such associations with heaps of Happy Meal toys.

"Substitutions for a Game Never Played," on display at the Visual Arts Center, spans a decade of paintings that use small subjects to explore large themes, such as mass consumerism and environmental waste. The excess speaks for itself, walking the line between a critical eye and a sense of complicity with the disposable objects of amusement. There's an innocent fun and a menacing, almost sinister quality in the work that both delights and unsettles. Viewers quickly realize they're seeing these scenes with the simultaneous perspectives of child and adult, both excited to pick through the colorful piles to find a new playmate, yet just a little disturbed by the overwhelming rubble.

Marlatt begins every painting by dumping a bag of toys onto a table and keenly observing the piles that form, recalling landfills, garbage dumps and discarded junk. She begins with acrylic paint to achieve the proper weight and feeling of plastic. There's a certain flatness in plastic colors that's more accurately captured with acrylic.

"I always hated the stuff because it just sits on the surface with its loud, toxic colors and it has no flow," she writes in an artist statement. "But it was indispensable when it came time for me to paint plastic toys because I wanted to paint a material realism, to find a place where the motif became the material and vice versa."

This connection between theme and medium is one of the strengths of the work, which is particularly prominent in the diptych "Animals 2." The monumental canvas is crammed to the brim with toys, some glimmering in the light while others remain dull and flat — but all inviting closer inspection. Despite this, there's a sense of insignificance as the cast-aside objects pile up and compete amongst themselves for the viewer's attention.

To contrast with this lack of preciousness are the puppet paintings, which single out particular characters such as Olive Oyl and Pinocchio and elevate them to lifelike status. These circular portraits, or tondos, are a contemporary nod to the religious paintings and self-portraits of Rembrandt in the 1600s. The mirth in Pinocchio's eyes is almost palpable, as Marlatt uses the traditional technique of applying multiple layers of thin oil paint glazes. Instead of getting lost among the chaos, the focus and admiration is on the toys as individuals, as if they were living, breathing people waiting to be painted.

These puppet portraits led Marlatt to create a series of self-portraits, papier-mâché masks titled "Everyman." These masks, or capgrossos, hail from Spanish parades and festivals. Each self-portrait retains Marlatt's face, but displays different features: She presents herself as a demon, a bearded woman and a Roman god.

The last portion of the show ends not with answers but with questions, hints of works to come; she plans to use the capgrossos in the same way a prop is used in a still life, another object through which she can communicate. In "Narcissistic Artist and the Seven Inflatable Sins" and accompanying performance video, Marlatt depicts herself wearing a capgrosso while she paints, peering through the open mouth of the mask to glimpse her reflection, with "Pagliacci" playing through speakers, commenting on the idea of otherness.

"If we could slip inside each other's skin like we could try on a different pair of onesie pajamas (or a big head)," she writes, "then we would see that we are the same soul with the same eyes peering out."

Whether they're piled on top of one another like football players or posing for glamour portraits, the toys in "Substitutions" are ultimately reflections of our culture and us — observing how we entertain ourselves, how we use toys as golems or scapegoats to play out our fantasies and fears. But they also speak to how we view objects — how we make them, the materials we use and the excessive amount available to us. S

Megan Marlatt's "Substitutions for a Game Never Played" will be on view through March 13 at the Visual Arts Center of Richmond. For information call 353-0094 or visit visarts.org.