Toy Maven: An Antique Plaything Specialist Talks About the Joys of Collecting 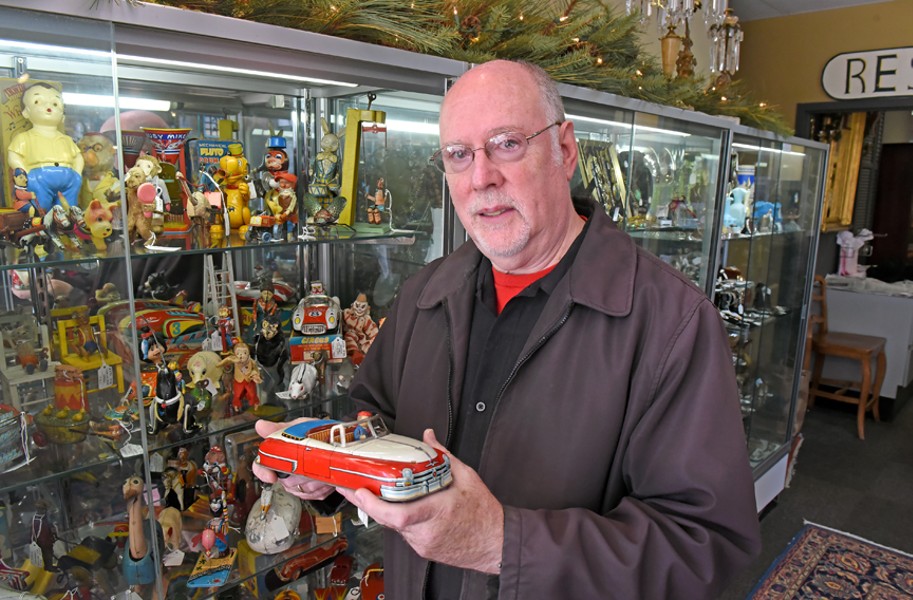 Scott Elmquist Collector Richard Brezner stands before some of his classic toys at West End Antiques Mall. Brezner started out DJing in New York and steadily has built an impressive collection over the years.

Richard Brezner of West End Antiques Mall started acquiring his the ’70s party-boy way. He took photographs of then-unknown Bette Midler during her Continental Baths days and DJ’d at New York’s Club El Morocco for regulars such as Jackie O. and Sinatra. He hard-wired speakers for nightclubs during the disco years and made mix tapes for designer fashion shows and chic boutiques — the latter a gig that lasted 38 years.

“Lots of fashion earnings allowed me to indulge in my main interest: toys,” he says. “You start out at the entry level, but before long you want toys that are nicer or older and they’re more expensive.”

Brezner attributes his fascination with windup toys to a childhood of parent-inflicted board games. When his collection surpassed a thousand pieces, he knew it was time to start purging. “The toy thing becomes a disease,” he says.

Forty years into collecting, he had far more toys than he could possibly display in his apartment. Yet every time he traveled for work, his only real interest was in where the local antique stores were in hopes of nabbing more vintage toys, preferably those made before 1920.

England and Holland yielded some of the largest caches and he soon became a devotee of German toymakers for their engineering and craftsmanship, particularly late-19th- and early-20th-century Gunthermann windup toys and Lehmann toys.

At the antique mall, where glass-fronted wooden cases near the front door hold a small fraction of his collection, Brezner points out an Asian-inspired windup featuring two coolies — unskilled Chinese laborers — complete with braids, carrying a tea cart.

“Their toys tended to be people-oriented,” he says. “But they also have historical significance because they showed us what people in other countries looked like.”

The Internet opened the world’s toy troves to collectors. But along with it came an abundance of cheap Chinese reproduction toys. Brenzer notes lithography and hand-painting as hallmarks of authentic items.

“If you’re not knowledgeable,” he says, “you wind up buying replicas without knowing. There’s no inexpensive way to buy Gunthermann and Lehmann toys. They go for $300 and up depending on the condition.”

Brezner’s case holds metal toy versions of insects, elephants, penguins, dogs, monkeys and clowns, among scores of others. Many of them sport cloth clothing, such as a mountain boy in lederhosen. The automobile era, which ushered in a wave of toy cars in various styles such as “crazy cars” and futuristic model renditions, was followed by a pre-“Star Wars” focus on robot toys for space-age kids.

Even old-time radio and television stars such as Edgar Bergen got the treatment. A Charlie McCarthy windup toy has the ventriloquist dummy in a backward-moving car that pops a wheelie while Charlie’s head spins. Another Strauss toy depicts a train car labeled Travelchix with four yellow chicks on top that, when wound up, peck up and down at the feed bowl atop the moving train.

“It’s the ingenuity behind how they work,” he says, clearly delighted. “But it’s also the colors, the mechanisms, just the oddness of them.”

He’s watched the market evolving as toys become big collectible items and more of the expensive ones wind up in private collections.

During the lean years, he often bought rusty or dinged toys, anticipating that when he could afford to, he’d replace them with nicer versions, which he’s done in many cases. The cream of his oldest toys will never see the shelves inside the Antiques Mall because he can’t bear the thought of selling them.

Every month he adds a few new pieces to the cases, acknowledging that vintage toys aren’t a point-of-purchase item. But Brezner also doesn’t know of any other Richmond toy dealers, making the display a bit of a toy museum, too — with him as curator.

Brezner’s toy showcases are to the left as you walk in the door at West End Antiques Mall, Building No. 1, 2004 Staples Mill Road.