Townley Haas: Inside the Journey of Richmond's New Gold-Medal Olympian

by Profiles by Lisa Antonelli Bacon

Ash Daniel With his new gold medal around his neck, 19-year-old Richmond swimmer Townley Haas receives a warm welcome Monday, Aug. 15, upon his return from Brazil at Richmond International Airport.

General Mills, dust off the old Wheaties box. Take us back to the time when the sports icons on the front represented ideals like dedication, honesty and humility, when love of sport outweighed endorsements, before Lance Armstrong was a doper and Ryan Lochte was a liar, before Dennis Rodman was, well, Dennis Rodman.

Townley Haas is the kind of sports icon you want looking into your kids’ eyes every morning.

Coaches and commentators have proclaimed Haas the future of USA swimming. He hasn’t been packaged yet, stuffed with bland nonquotes, or glammed up by stylists. He hasn’t had time to get comfortable with celebrity. When a crowd applauds, he tucks his chin and halfheartedly raises his fists to about ear level. Prepared quotes? Forget it. When a reporter serves up a softball question, the answer is spontaneous and from the heart.

“What’s it going to be like returning to UT with a gold medal?”

“I hope it’s like last year,” he says of his freshman days at the University of Texas. “I had fun.”

The future is now. At 19, Haas is the same age as Michael Phelps — the most decorated Olympian ever — when he won his first gold. And in Brazil, he beat the times of every swimmer — including Phelps — in the men’s 200-meter freestyle. You might say he out-Phelpsed Phelps.

Haas, pronounced “hahs,” isn’t exactly sure what it means to be the future of United States swimming. He is sure it brings a new level of pressure. “It’s kind of an honor that people think that,” he says, characteristically understating things a tad. “I guess I have a lot to live up to.” 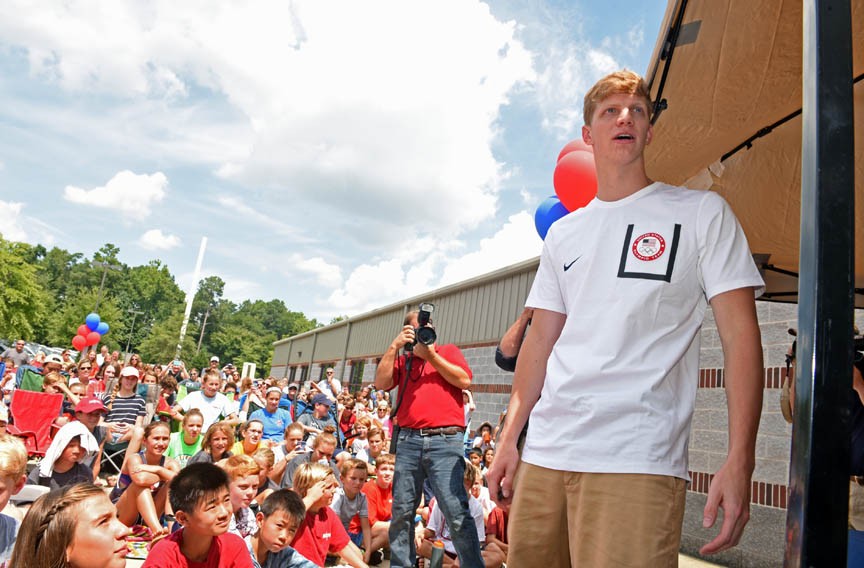 The immediate observation upon meeting Haas is that the lighting at swim meets is horribly unflattering. Everyone looks a little pasty, monochromatic. In person, Haas is blonder, tanner, with bluer eyes. Only the huge smile is the same. He is calm, poised. He makes and holds eye contact.

Back in Richmond on Aug. 15, with only a week between Rio and his return to Texas, he’s making appearances such as throwing the opening pitch at a Flying Squirrels game. When he isn’t pulled in those directions, he’s spending time with people who are important to him.

On this steamy afternoon, he’s returned from visiting the monks of Mary Mother of the Church Abbey at Benedictine College Preparatory, where he graduated two years ago. He pours himself a glass of milk and sits down at his mom’s kitchen counter, careful not to crowd Roxie, the family’s puggle.

“I’ve been through three gallons of milk in three days,” his mother, Lori, shouts over a whirring mixer.

The 6-foot-5 athlete is on his third day of R&R at his parents’ Short Pump home. Four more and he’ll be back at UT, getting up every morning for pre-dawn practices, diving into core classes and preparing to tackle his major in kinesiology. At UT, he says, even the guy with the gold has to keep up his schoolwork. 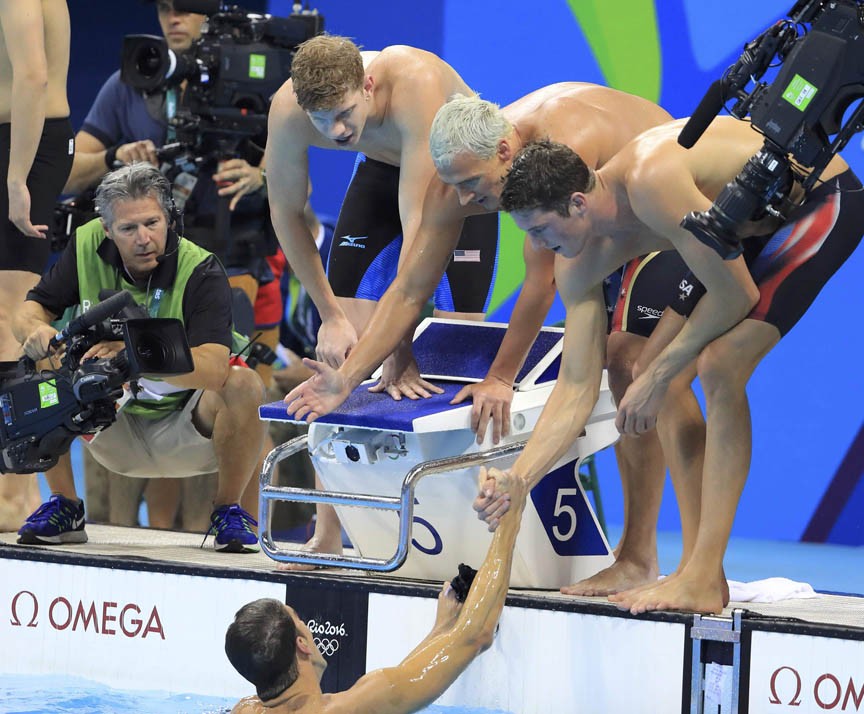 Other than the odd fraction of a second, what’s the difference between a great swimmer and an Olympian? “You can be technically perfect,” he says, “but if you don’t have the drive to want to do it. …”

And another thing. “Something you learn from your parents: hard work. My parents did a good job of that. It’s also something you pick up. If you look at someone like Michael Phelps, I mean he’s incredibly dedicated to the sport and incredibly hard-working. And he’s the most decorated Olympian of all time.”

In any conversation about Olympic swimming, it’s impossible to avoid the P-word. “Every young swimmer wants to be Michael Phelps,” says Haas, who settled for being a tight teammate. In Rio, their rooms were next door to each other in sort of a milk-and-cookies frat house. “There were nights where we were all watching TV together. We played spades some nights.”

Haas doesn’t count beating Phelps’ time in the relay as an achievement.

Excuse me, but isn’t that sort of like saying: “Guys, I’m feeling a little taxed. Mind carrying me?”

Haas responded by doing what he typically does: He didn’t think about it. He simply went full bore. 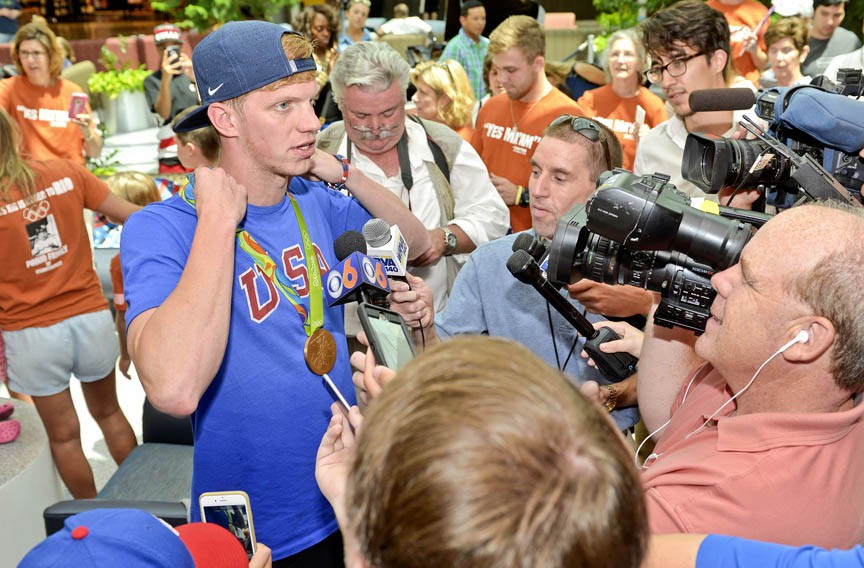 Haas wanted to swim before he could walk. He was 10 months old when his mother plopped him in the sand at Myrtle Beach, and then watched him make a beeline for the surf on all fours.

“He crawled right up to the water’s edge,” she says. “If we’d let him keep going, he’d have gone halfway to England.”

A few months later, he tested pool swimming — and his mother’s nerves — for the first time by spontaneously leaping into water deeper than he was tall. After that, it was hard to keep him out of the pool. His parents knew that if he didn’t learn to swim, he was going to drown trying, so they signed him up for swimming lessons at age 3.

By 4, Haas was competing for the Church Run Rockets, his neighborhood summer league swim team. Most of the neighborhood kids were on the swim team because most of their friends were doing it.
For Haas, it was a prelude.

By 7, he was serious enough to compete for Nova — not Northern Virginia, but a sort of swim farm in Richmond’s West End, where professional coaches help committed young swimmers maximize their potential.

The dream almost ended there.

Haas was 8 and having difficulty with a flip turn. “It was a left-left, right-right,” he says. Judging by the name of the maneuver, it would seem essential to know left from right. “But somebody,” he says, cutting his eyes in his mother’s direction, “hadn’t taught me left from right.” (“He was my third kid,” Lori says.) “I would turn left and pull right or turn right and pull left.” His coach bit down.

“I remember getting to the point where I didn’t want to go to practice because it wasn’t fun. He just yelled at me.” But after some negotiation and conversation — “as real of a conversation as you can have with an 8-year-old,” Haas says — he worked through it. “I figured out that this is my left hand, and everything changed. I stopped getting yelled at, and I stayed.”

Drew Hirth, longtime mentor and Haas’ off-and-on coach since Haas was 5, says it was during that time that Haas first distinguished himself. At 15, he broke a meet record in the 400-meter freestyle at the USA Swimming Junior Nationals. 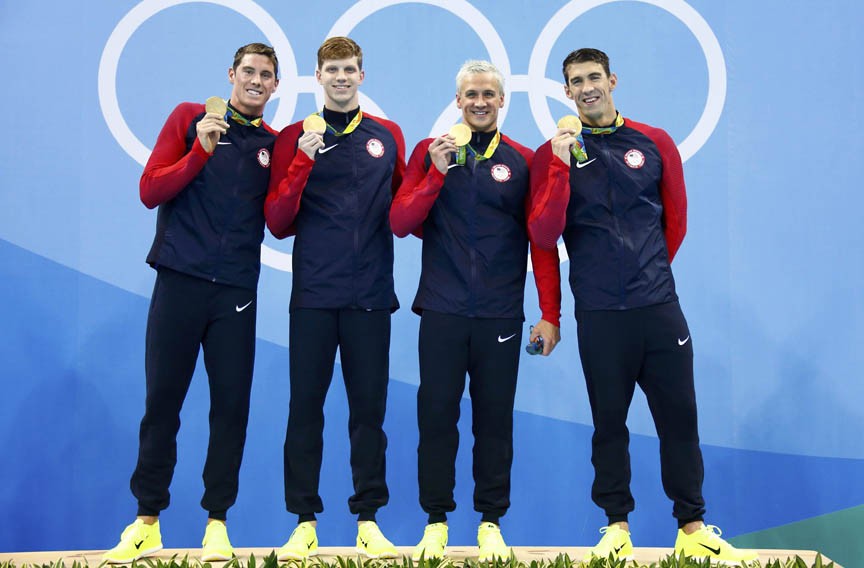 Some swimmers have complicated strategies. China’s Sun Yang, for instance, who won gold in the men’s 200-meter freestyle, tends to chill the first 100 meters and blast the second.

Haas’ strategy is sort of a nonstrategy. “I don’t know what I do,” he says. “I try not to think about it. I relax.” But in his head, he’s preparing to push with all he’s got.

Nerves are never an issue, he says. Swim meets are like Groundhog Day: “It’s always the same. You’re in the water. There’s a black line under you. The only thing that changes is the location where the meet is. When you’re in the water, you can’t tell.”

And while he stares at the ubiquitous black line, what’s in his head?

“It kinda depends. If the swim hurts, I’m like, ‘This hurts.’ It’s horrible, but I try not to think about it too much. I’m usually looking at other people, seeing where they are.”

Are they usually behind you?

“That’s the goal. If they’re not, I try to get in front and stay there.”

Full-bore all the way. S