At VMFA, beauty goes beyond the eye of the beholder with touch tours. 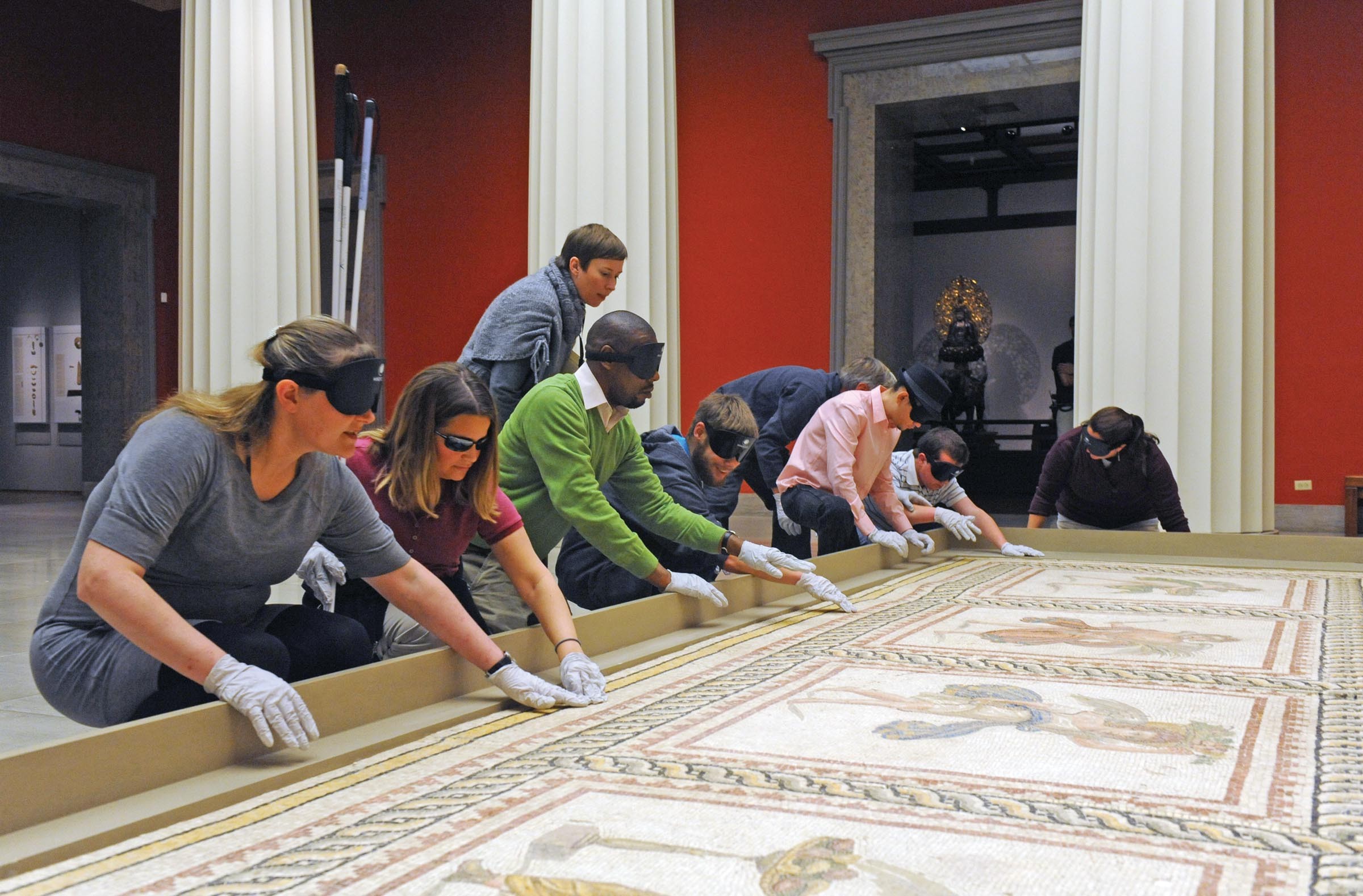 On a bright fall afternoon at the Virginia Museum of Fine Arts, Steven Petty's attention zeroes in on the thousand-plus-piece extravaganza that is the Dale Chihuly chandelier.

"It reminds me of Venetian glass," he says.

He's right. But what's so remarkable about Petty's observation is that he's never seen the Chihuly chandelier. Like most of his companions at the museum this day, Petty is blind.

Although visual impairment and art galleries may seem an incongruous combination to some, they're nothing out of the ordinary for the museum. For nearly a decade, it has been host to groups from institutions such as the Virginia Rehabilitation Center for the Blind and Vision Impaired. The draws are touch tours — guided tours that allow visitors who can't see paintings or sculptures to nevertheless experience art.

Despite their name, touch tours involve more than simply laying hands on the works. They're longer than a standard tour, sometimes stretching up to two hours, and focus on fewer pieces. The depth of interaction and education that the experience offers, however, compensates for any lack of breadth.

Docents provide a detailed verbal description of every object and its surroundings. On a recent tour, the guides paused at a third-century sarcophagus carved with images of young boys and musical instruments to play a sound clip of a pan flute from that era.

The aural approach drives how participants interact with the pieces.

"A lot of it is guiding with words," says Courtney Morano, a museum education programs manager. "It's about positioning their body and [helping them] feel the things you want them to feel."

In the same way that an art student develops a practiced eye by examining paintings, different techniques of exploring artwork through touch can be cultivated.

"The fingertips are a lot more sensitive than the palm of the hand," says Jennifer Kennedy, an instructor at the Virginia Rehabilitation Center. And from a conservation perspective — a critical issue at a fine arts museum — the fingertips exert less pressure and stress on a piece.

The tactile approach also emphasizes different aspects of the works. While most visitors encountering the museum's Roman floor mosaic are preoccupied with its flowing depiction of the four seasons, touch tour participants notice the varied shapes of the tiles, their temperature, and the intricate way they fit together.

To Kennedy, who went blind at 15, the ability to experience art without sight is a key aspect of the tours, which also aim to show participants that although they may be losing their vision, they aren't losing their ability to lead an independent and meaningful life.

"Blind people need to understand that there's an entire world out there that is open to them if they can think outside the box," she says. "I want our students to feel empowered and feel, 'I can go out and I can learn how to do something I've never done before.'"

For Jennifer Nolan, a student encountering the touch tours for the first time, the experience is a success. "I didn't think I'd be able to tell what the art was just by touch or feel," she says. "But I really could visualize it." S

Touch tours are arranged by scheduling with the Virginia Museum Fine Arts, and for now are limited to groups. Contact tour services at 340-1419 or email tourservices@vmfa.museum.