Challenges and all, the Virginia Hornets find a place to call home. 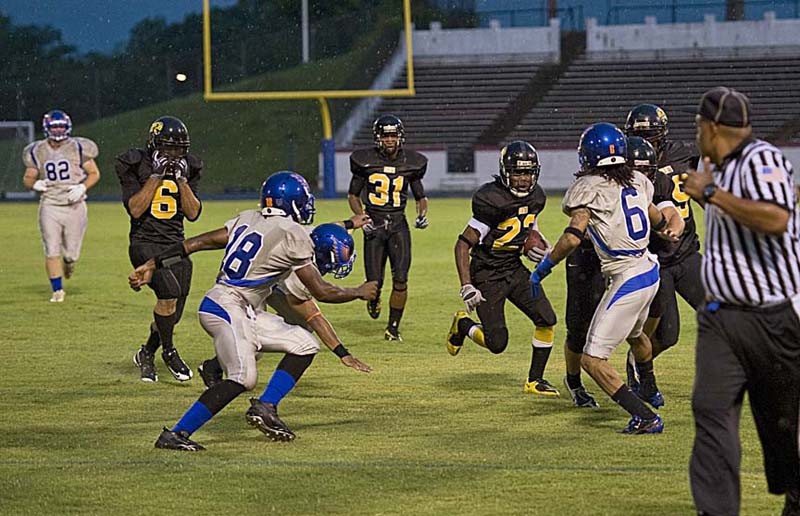 In early July, just as the summer humidity begins its yearly ascent into the unforgiving, 15 men meet at Westover Hills Elementary School to play football. Bright field lights, attempting to duplicate the duty of the setting sun, drone loudly, while gnats buzz and mosquitoes feast on the players and coaches.

The Virginia Hornets, a 17-year-old semipro football team composed of players as young as 18 and as seasoned as 37, practice on a patch of grass sandwiched between two Little League baseball teams. Not everyone, including the kicker — a double anomaly on the team for being not only white but also female — is here yet; many of the players are just getting off of work. A few are wearing pads or other worn equipment they outgrew a season or two ago.

But nothing — not the heat, a job or a lack of funds — could keep these players from meeting here, at Forest Hill Avenue and Jahnke Road, to practice for the first game of their season, which for the first time in their history has them playing home games not at high-school fields abandoned for the summer but in a real-deal venue: City Stadium.

They’re a motley-looking lot. Men on football teams tend be in uniform shape with the occasional portly running back. Not here. Instead there’s the stocky, scrawny, chiseled, midsized and the downright “Seriously? You play football?” One fellow looks so young he prompts a teammate to joke, “I need to see some ID!”

But although the players are almost all black men, their diversity extends to more than just body type. Despite some inter-squad ribbing (“If you miss this catch, you have to walk home!”) they’re beloved by each other and their coach, Clifford “Perk” Jefferson.

On paper, the Virginia Hornets reside in a kind of overlooked sports purgatory somewhere between college and professional, or even arena, football. On a more important level, the team, which started in 1994, operates a lot like a family, with founding coach Jefferson serving as a father figure to a tribe that once was running out of options. 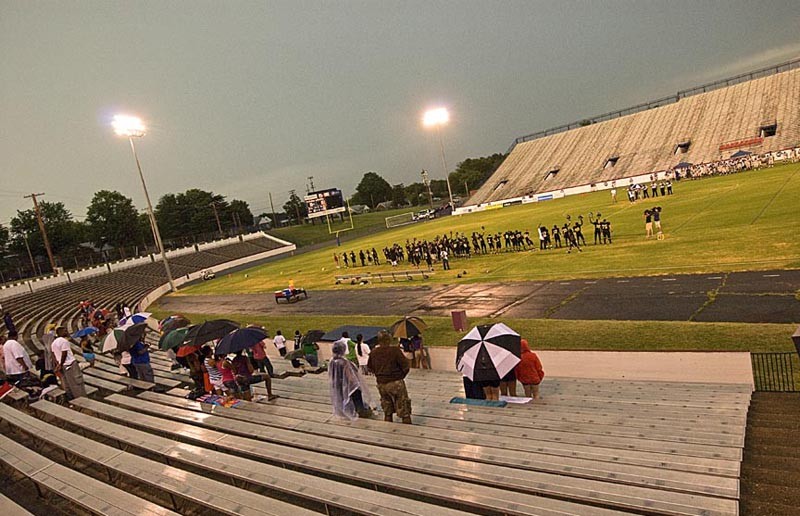 “We are about second chances,” Jefferson says. “I take the good and the bad and mix it together.” Some of the Hornets played football in college. Now they play for camaraderie, exercise, something to do. Others might’ve played in high school. Some had trouble finishing high school. “I’ve had guys that had misdemeanors,” Jefferson says. “I’ve had a kingpin drug dealer that turned his life around. Now he has two jobs, two kids. I’ve had guys that, if it wasn’t for this program, they’d be dead or locked up.”

That might have been the narrative of quarterback Hamilton “Biscuit” Wells. After high school, which the 29-year-old barely finished, he made a career of hanging out on Richmond streets. Around 1998 he saw a flyer for the Hornets, joined and didn’t look back. Like many on the team, he’s benefited from the tutelage and mentorship of Coach Jefferson. He went on to play football in Europe, but has since returned home to Richmond and, without deliberation, the team. Ask him what he’d have been doing if not for the Hornets, and he’ll say without pause, “Prison.”

The Hornets, a volunteer nonprofit organization, often donates proceeds to charity groups (including Susan G. Komen for the Cure, Central Virginia Food Bank and others). It has a leader whose own personal trials spur the boys to keep playing no matter what. “In April, I was laid off from Philip Morris after 13 years,” Jefferson says. “My mother passed away in March. The devil has been busy. This is the only thing that keeps me going. Football is keeping me strong.”

The team needs $8,000 for uniforms. How does Jefferson intend to raise that money? “Prayer,” he says. “It’s worth it. I know we’re doing something positive.”

Three weeks later, 50 Hornets stand on the City Stadium field, ready to play their second home game. For a nonprofit previously wondering how to raise money for uniforms, this game seems a surprisingly lavish affair. The players’ new black getups — the money for which came from small donations from a number of donors — look sharp against the stadium’s lush jade lawn. Hornets wear pink socks in support of the Susan G. Komen Foundation, which has a booth on the perimeter of the seats, as does KISS-FM radio (99.3 and 105.7) and Famous Dave’s BBQ. There’s even a gyro-wheel ride for kids.

Though an entire side of the stadium is empty, the Hornets, who are 2-0 as they begin this game with the Carolina Stallions, have more than 300 people in the stands rooting for them.

“It’s a good team,” says Harold Yager, a fan who discovered the Hornets 17 years ago when he saw them practicing at Westover Hills Elementary near his home. Yager wears a Hornets T-shirt and cap over a cascade of long, gray hair. “They do good in the community,” he says. “Coach Jefferson is a fine man. If he can, he helps. He gets them into school when he can, helps them clean up their record. And he knows football. You know the problems in Richmond … how kids can be running with the wrong people. It’s better that they’re playing football.”

And they’re not too shabby at it either. This day, the Hornets beat Carolina 33-0. S

For information on the Virginia Hornets, go to vahornets.com.

Correction: In earlier print and online versions of this story, Style misidentified the Hornets' player running the football. The player is Joe Banks, a defensive back, who was returning an interceptin during the Hornets' victory over the Philadelphia Phoenix July 23 at City Stadium. We regret the error.