Sacha Baron Cohen succumbs to potty humor with "The Dictator." 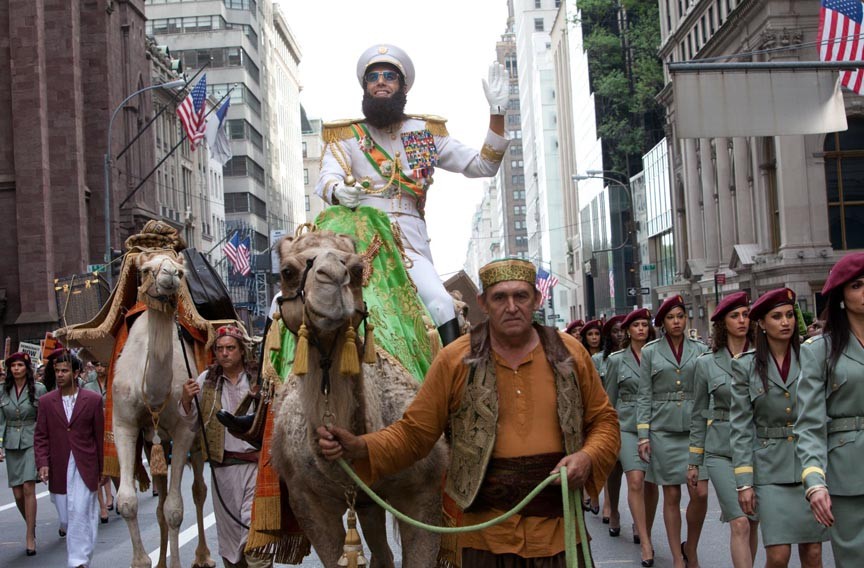 Good satire is something like the inverse of black comedy. Instead of laughing first and then feeling horrified, with satire you're horrified at first and then see the underlying humor.

Sacha Baron Cohen's "The Dictator" opens with a bit of genuine satire of the idea of dictatorship, dedicating itself "In Loving Memory" of Kim Jong Il, North Korea's former dictator who died in 2011. Unfortunately, most of the rest of "The Dictator" is much less imaginative. As a follow-up to "Brüno" the movie, this is Cohen's first time delivering a mostly mainstream comedy, using a formulaic plot to poke fun at the obvious character flaws of Third-World dictators, and, when that fails, bathroom humor.

Cohen plays Supreme Leader Aladeen, eccentric ruler of Wadiya, a Middle-Eastern country similar to Libya in its abundance of oil and bizarre rule of one. Ostentatious displays of wealth and power are the movie's initial comic staples, visualized by long motorcades of gold-plated Hummers, gold-plated guns, and Aladeen's killing subjects at whim with them.

Admiral General Aladeen resembles former real-life Libyan dictator Muammar Gaddafi with a bushy Osama bin Laden beard. His introduction is the film's best 20 minutes, a quickly-paced, faux American-news-channel bio describing his birth and rise to power after the death of his father, the former dictator. By the end of this sequence, however, "The Dictator" begins to stray from General Aladeen and into the realm of general American comedy.

A coup by a longtime second-in-command, Tamir (Ben Kingsley), strips Aladeen of country and beard, forcing him to find refuge at a Brooklyn natural foods grocery under the tutelage of a feminist and activist named Zoey (Anna Faris). Aladeen counter-plots to disrupt Tamir's attempt to turn his country into a democracy at the UN, in his spare time reforming his laid-back employer into a grocery dictatorship, a process involving perhaps one too many potshots at American alternative lifestyles. It's become a trend bordering on cliché in American comedy to target attitudes that the mainstream finds quaint, ridiculous or obnoxious, like veganism. Neither "The Dictator" nor the dictator can resist this low-hanging fruit.

Aladeen eventually finds help in a former subject, Nadal (Jason Mantzoukas), and at this point the movie abandons any pretense of making sense in favor of stringing together a series of outlandish escapades involving this duo. Their efforts offer some admittedly hilarious moments, yet equally some of the most obvious American comic stereotypes since Jim Varney was alive.

Aladeen and Nadal take a helicopter tour of New York, for example, pointing out various landmarks in Wadiyan, freaking out two American tourists who call the Port Authority. If such a scene were written 10 years ago it wouldn't have been in any better taste or funnier, but at least it wouldn't have been 10 years out of date. Aladeen and Nadal's trip to the funeral of a former New York gang leader to get his beard makes even less sense, but at least it provides a better payoff than a "terrorism misunderstanding" (the movie's words).

Cohen's gradual watering-down of his British-bred comedy worked best with "Borat," which took the seemingly universal inclination to laugh at the culturally backward "other" and added the notion that somewhere in the world there had to a place so remote and backward it would produce the most culturally backward man possible, the ultimate "other." Cohen pulled it off with brilliant acting and the help of director Larry Charles, who also helmed "The Dictator." Cohen retains his brilliance for pantomime and timing, but "The Dictator" is a much less ambitious effort. Its outsider-in-the-big-city formula benefits slightly from the twist that the outsider is a cruel man immune to the influence of a foreign culture. But this isn't "Borat." This is a slightly clever gag one minute and a penis in your face the next. Then a poo joke follows.

The results hit and miss with equal force. You can find yourself laughing hysterically one minute and cringing the next. Likely the movie is intended to please more than one audience — those who appreciate potty humor as well as those patient and attentive enough to hang around for the occasional political satire. There's a rule as old as Middle Eastern culture that says you can't serve two dictators. "The Dictator" may not be torture, but it's not its makers' best work. (R) 83 min. S