Top VCU Official Is Out

Wayne Turnage, chief of staff for VCU President Michael Rao, leaves the university in a haze of controversy. 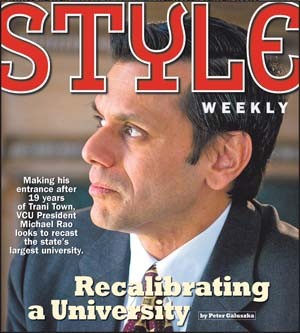 After serving less than a year, Wayne Turnage is leaving his post as chief of staff at Virginia Commonwealth University.

Turnage's departure raises questions about the stability of the school's top management since Rao became president in July 2009.

Turnage will leave VCU on Jan. 31, just two weeks after his first anniversary at the university. Before assuming his post he was a high-profile figure as chief of staff for former Virginia Gov. Tim Kaine, who now serves as chairman of the Democratic National Committee.

Turnage says in a statement that he is leaving as part of a reorganization of Rao's staff. University Rector Anne G. “Panny” Rhodes is quoted in The Richmond Times-Dispatch saying that there is “nothing out of the ordinary” about Turnage's departure.

But his tenure wasn't without controversy. Reached by telephone this afternoon, Turnage's former deputy, Kathy Honsharuk, says that she was forced out of her position after Monica Rao, President Rao's wife, told Turnage to fire her.

Turnage resisted firing her, says Honsharuk, a veteran university employee who became deputy chief of staff in February. She left that job in September and now works with VCU's university relations office.

While Honsharuk declines to further discuss the situation, she says that Monica Rao was involved in her transfer. “I had been with her at many meetings in my job,” she says, adding that she didn't know why she was targeted for dismissal. Turnage told her that she had been accused of being a “disloyal leak,” she says.

Reached by Style Weekly, Turnage declines to discuss matters involving Honsharuk. Questions from Style to the media relations office were referred to a spokeswoman, who could not immediately be reached for comment.

While Rao has received praise for setting higher academic and research standards for the university and for being a good listener, he's drawn criticism for being slow in achieving his goals and in organizing his staff.