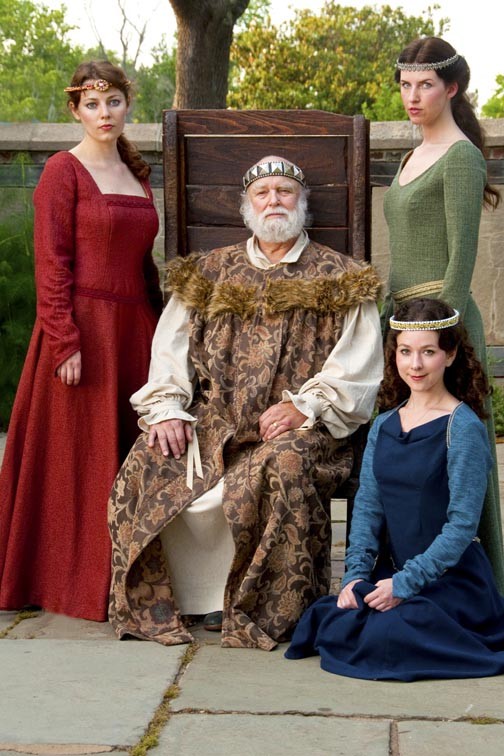 Staging Shakespeare's "King Lear" is a task filled with difficulties. A character's eyes must be put out onstage; in another scene a man must jump off a cliff. Staging this successfully, as well as balancing all of the drama and requisite Shakespearean swordplay, is quite a feat.

Luckily for us, Richmond Shakespeare has created quite a show.

"King Lear" begins with the titular character dividing up his kingdom. Elderly, and with no male heir, Lear has chosen an uncommon practice — divvying up his kingdom among his three daughters. Egotistically, Lear demands that each of his daughters profess her love for him and beg for the largest slice. Loving him the most, his daughter Cordelia abstains, saying that mere words do not merit loyalty. Outraged, the king banishes Cordelia, and divides her share among his two remaining daughters. A tale of hubris and redemption, this dark play is considered one of Shakespeare's best works.

Alan Sader (best known for his Christian Children's Fund and ChildFund International commercials) stars as Lear. Sader looks regal as the foolish king, and plays his grief and madness well. From the show's second scene onward, Adrian Rieder shines as the cunning and bastardly son Edmund, playing multiple characters off each other to get what he wants. Sarah Jamillah Johnson's Regan is delightfully evil, also working against the other characters — including her own husband — to get what she wants. Foster Solomon's outraged Earl of Kent delivers some of the show's best insults and fills the stage with his presence. The ensemble as a whole is powerful, and care has been given to make even the smallest of characters come to life. If there's one thing to criticize in the show, it's Sader's portrayal of Lear, which sometimes lacks intensity and can be overshadowed by players like Solomon.

The sword-fighting scenes choreographed by Ryan Bechard (who also portrays the cruel Duke of Cornwall) are electrifying, and Rebecca Cairns and Ann Hoskins' roughly two dozen costumes are beautiful.

James Alexander Bond's direction makes some excellent choices, like having Goneril and Regan both trying to get the upper hand instead of acting as a united front, as the play is often staged. There are a few minor missteps in the show — Cordelia mentions in the opening scene that she looks "with wash'd eyes," yet never cries. Still, the problems are trivial compared to all the show gets right.

If you've been waiting to see a Richmond Shakespeare show, this is the one. S