Movie Review: Like its protagonist, Scorsese’s “The Wolf of Wall Street” lives for excess. 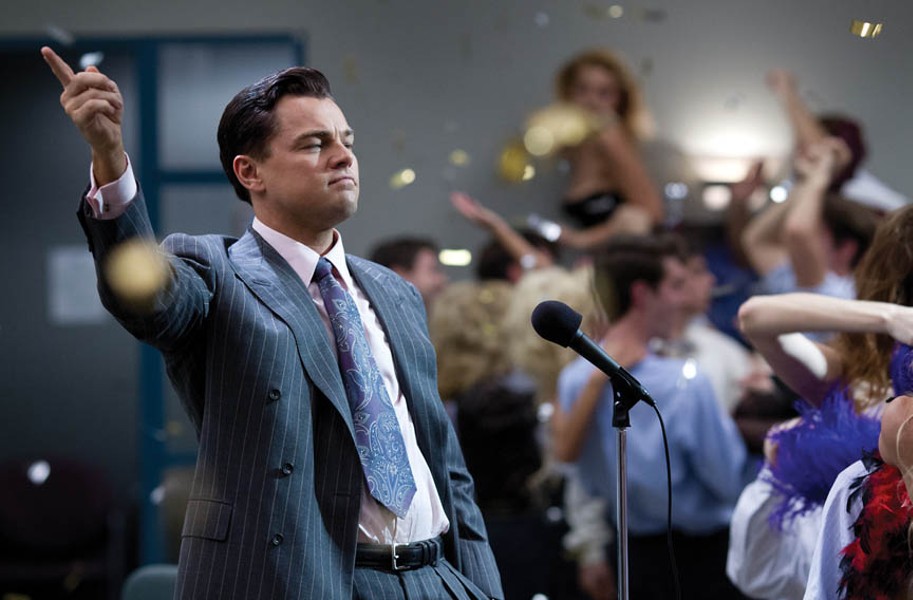 Paramount Pictures Leonardo DiCaprio gives an unhinged performance in the “Wolf of Wall Street” as a master salesman who can’t get enough cocaine or naked ladies before breakfast.

After satisfying a surprising desire to make a children's movie with "Hugo," Martin Scorsese returns to the world of adults, modern times and fast living with "The Wolf of Wall Street." With a vengeance.

The movie starts in Jordan's semi-present, but guides us through his meteoric rise from a poor, wide-eyed junior broker to a filthy rich swindler hounded by the FBI, and all the damage he does to his body, mind and reputation along the way. Both man and film are based on the real Jordan Belfort and his real book about his high-living, hard-partying and very illegal ways in the early 1990s. And yet, despite this basis in reality, you can feel Scorsese straining to give it significance. For three hours.

The movie is filled with tell-all shenanigans, from hookers to specialty drugs to fraud and money laundering, but comes up a little short on character development and stakes. I laughed, uproariously at times, but wondered after the lengthy film who Belfort really was, and to what extent the FBI had trouble nabbing him. With so much partying and flesh on display it's easy to get lost with Belfort and his strange friends, but you start to wonder if they really matter, and why.

Although far too old to convince as a 20-something anymore, DiCaprio gives an exuberant performance, even if it isn't necessarily an individual one. It seems more like an amalgam: a lot of Howard Hughes from "The Aviator" mixed with Michael Douglas' Gordon Gekko and Alec Baldwin's cutthroat salesman from "Glengarry Glen Ross."

Screenwriter Terence Winter, a writer from "The Sopranos" and "Boardwalk Empire," seems to be cribbing from both those films in half of the good scenes and from Scorsese's "Goodfellas" in the rest, as DiCaprio's Belfort gives "money talks, B.S. walks" speeches to his employees whenever he isn't addressing the camera like the mobster of Manhattan's financial district. "Everything was for the taking." That line actually is from "Goodfellas," but there are plenty like it in "Wolf."

The movie is huge, like the main character's lifestyle, but after a while becomes unbalanced by it. There's a fine supporting cast, including Matthew McConaughey, Chandler and Jon Favreau, but none of them is fleshed out enough to balance DiCaprio's fast-taking snake oil salesman. In the past, Scorsese has shown that he can fill his films with secondary characters as real and vital as the protagonist, and in "The Departed" he even gave us two great protagonists.

Belfort has a glitzy bimbo for a wife (Margot Robbie) and a goofy best friend and business partner (Jonah Hill), but they are no Lorraine Bracco and Joe Pesci. And though we're invited into Belfort's world, it never seems like much more than a playground for entertaining the movie audience with sleazy behavior. There are a couple of scenes where Belfort is about to launch into detail about his latest scam only to cut himself off. The details are boring, he tells us. All we really want to know, he says, is that they made mountains of money — and had orgies with it.

As Scorsese has shown in other films, criminal operations can be fascinating. Unfortunately, they're glossed over here in favor of numerous party scenes. Belfort and his cronies liked to party as extremely as they liked to scam people. It's made abundantly clear, to the point that Scorsese seems to want to cram the entirety of all three "Hangover" films into one. So many scenes of debauchery, while great fun for a little while, soon grow overly long, redundant and tiresome.

"The Wolf of Wall Street" is what you might call a would-be great film, marred mostly by its ungainly size disproportionate to its importance — somehow over-baked and undercooked at the same time. What would work as a simple black comedy has been blown up to sweeping epic proportions that feel deflated in the end. One supposes, given a different script, "The Wolf of Wall Street" could have been about pump-and-dump trading like "Goodfellas" is about extortion and burglary in the mob, but unfortunately it just isn't. (R) 180 min. S

The Wolf of Wall Street