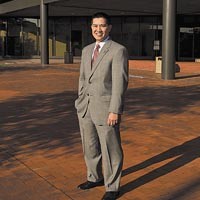 Six days before North Vietnamese tanks rolled into Saigon on April 24, 1975, Tony H. Pham, then 2 years old, was on the last civilian flight out of South Vietnam.

He, his two sisters and their mother embarked on a remarkable journey that would take them to a refugee camp in Arkansas and then to Henrico County, where a church sponsored them. Pham's father, a South Vietnamese Army officer, joined them later.

Living in an apartment off Parham Road, Pham struggled to learn English. He was naturalized as a U.S. citizen in 1984. After Meadowbrook High School, he attended the College of William and Mary and the University of Richmond law school.

In 1999, the freshly minted lawyer landed a job as a prosecutor in Richmond, where he dealt with dope dealers and gangs. He moved to the city attorney's office in 2008.

“I'm living the American dream right now,” Pham says. So he must give back, he says. In part, he uses his language skills to help immigrants understand voting rights. His work has earned him the Old Dominion Bar Association's presidential merit award.

He's also volunteered with the Virginia Asian Chamber of Commerce, helping the group create its first legislative summit this summer, and working with it to address cultural, civic and social issues facing that community.

He sees cultural chasms. For example, once two relatives were having a vigorous argument and the police were called. “People didn't explain there was no domestic violence,” he says. “That's just how Vietnamese argue.”

For fun, he golfs and takes his children to international festivals, he says: “There always is a lot of eating involved.”