Local recording engineers are hoping there will still be a market left as the economic recession plays out. 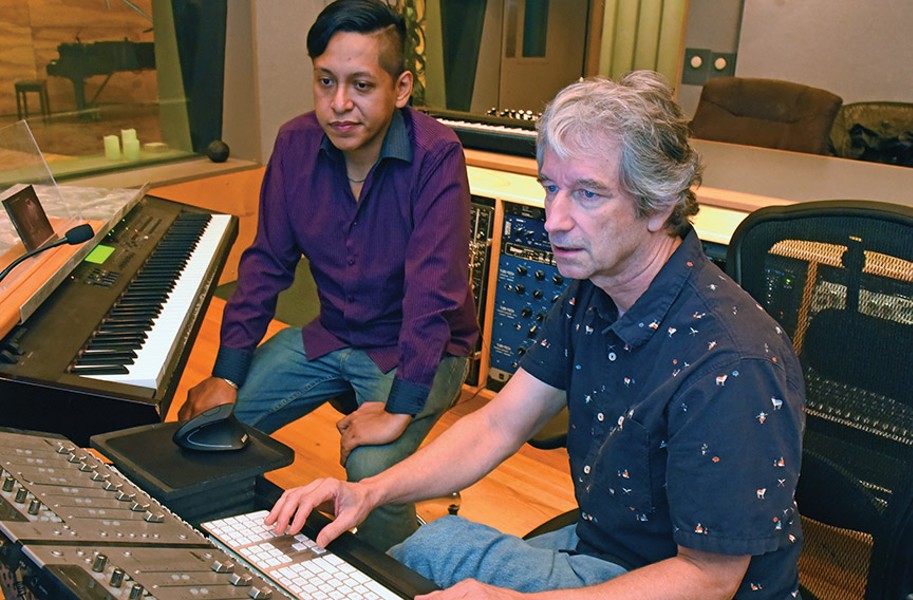 Scott Elmquist/File Music producer Alberto Yapur sits next to Carlos Chaffin, a longtime producer and session musician at In Your Ear studio.

Studios are mapping out their own survival strategies as the Richmond music scene folds into a protective crouch and performers trade the club stage for the Venmo sofa.

It’s just a small corner of a global phenomenon. After 30 years of navigating the industry currents, recording Grammy-winning albums (Chris Brown’s “F.A.M.E”), recording and mixing thousands of household brand TV and radio commercials, and moving into Hollywood postproduction, In Your Ear Studios had a prime seat to watch the lights of the entertainment industry literally go out.

“We have a cloud-based software package that lets us see who is online,” says founder Carlos Chafin. “Usually there are green lights up at the Warner and Disney studios. They all have cartoon names like Mickey Mouse, Roadrunner, Yosemite Sam. Last week, several times, there were no lights anywhere. Production and postproduction were shut down. Everyone is in shock mode.”

In Richmond, the lights are still on if the future is dimming.

“Thankfully, I am still working, if not with bands,” says Lance Koehler, one of the founders and the drummer of the No BS Brass Band. His Minimum Wage Studio has long been a destination for local bands on a budget. “People send me tunes to add drums to. Every now and then a solo person will come in for a couple of hours. We are focusing on maximizing our time together. And, thank God, I had a bunch of mixing/mastering to do.”

At the start of the pandemic, Spacebomb Records had the idea that it would become a port in the storm for artists cast adrift by when South by Southwest was canceled. Within a week, that generous offer was rescinded, everyone in the company was working from home and founder Matthew E. White posted on Instagram that he had some symptoms of the virus.

The staff is intact and members have a daily video conference, but it is a major challenge.

“Spacebomb’s approach is having people together in the room,” says chief executive and co-owner Ben Baldwin. “There are other things we can do, writing arrangements, creating sample libraries. But collaboration is our hallmark.”

“I am doing all right,” he says. “I am splitting my days between yardwork and the old house and working on music. I have transitioned more into mixing, which is good because all the tracking has been postponed. Camp Howard, Charles Owens, Free Union all scheduled for March and April. But I have new Dave Shultz, Spooky Cools and Scott Lane projects. And Cameron Ralston is going to send some ambient upright bass for a collaboration project.”

The art of a studio is shaping fleeting moments into something that will hold up in very different times. “You have to trust your instincts,” Olsen says. “People hire you for your taste, but if you listen to the same track over and over for six hours, you get too zoned in. You start second-guessing. You need to step away.”

What lies ahead is much less certain. “I have been lucky so far. A month from now I am going to be really hurting,” Koehler says. “There are huge holes in the schedule. Projects no longer have funds. If people get $1,200, they aren’t going to spend it on studio time. No BS gets paid well, but all our festivals are closed. And they have taken such big losses: Time, facilities, sound rentals — how are they going to come back?”

Spacebomb is taking big hits in the artist and tour management facet of its business.

“All of that work is gone,” Baldwin says, “and it doesn’t look like it is coming back until deep in the fall. We are doing what we can. Angelica Garcia is getting a lot of coverage for how she is weathering the pandemic. She released a new song last Friday and will be on “Tiny Desk Concert” next week. The Sleepwalkers did a session from different houses. Nadia Reid is perfect in an intimate solo. But there is no replacement for an artist playing live in front of a thousand people.”

Chafin and In Your Ear are busy for the moment. They just finished the music and sound production for PBS’s “The Good Road,” the locally produced global philanthropy documentary series. There are plans to record a book on tape with actress Carra Patterson, from the “The Arrangement” and “Straight Outta Compton,” who is opting to ride out the pandemic in the city after being stranded when preproduction on a Disney+ version of “Turner and Hooch” shut down.

But everything depends on what happens next. “We depend on talented individuals, actors and musicians. If they can’t perform, they will have to get other jobs, maybe in other places. Without them here in Richmond, we are doomed,” Chafin says.

Not that there is anywhere else to go.

“Most disasters are local. This is not like a tsunami where you can just head to higher ground. Richmond is a diverse city. It has been fairly immune to the economic roller coasters of the past. My hope is people will stay put. That we will figure it out faster. It will still hurt a lot.”

“The question is how do you rekindle?” Baldwin says. “We’ve got some pretty good strategies, but so much is unknown. Taking guesses on what the landscape is like in two weeks. Decided to stop second-guessing, be calm as possible. If there is big question mark, then wait.”

Everyone recognizes the worst is yet to come and the new normal will likely be different from what came before.

“The world is getting bigger, faster, more connected,” Koehler says. “Things like this are going to happen again.”

Back to the Music Issue